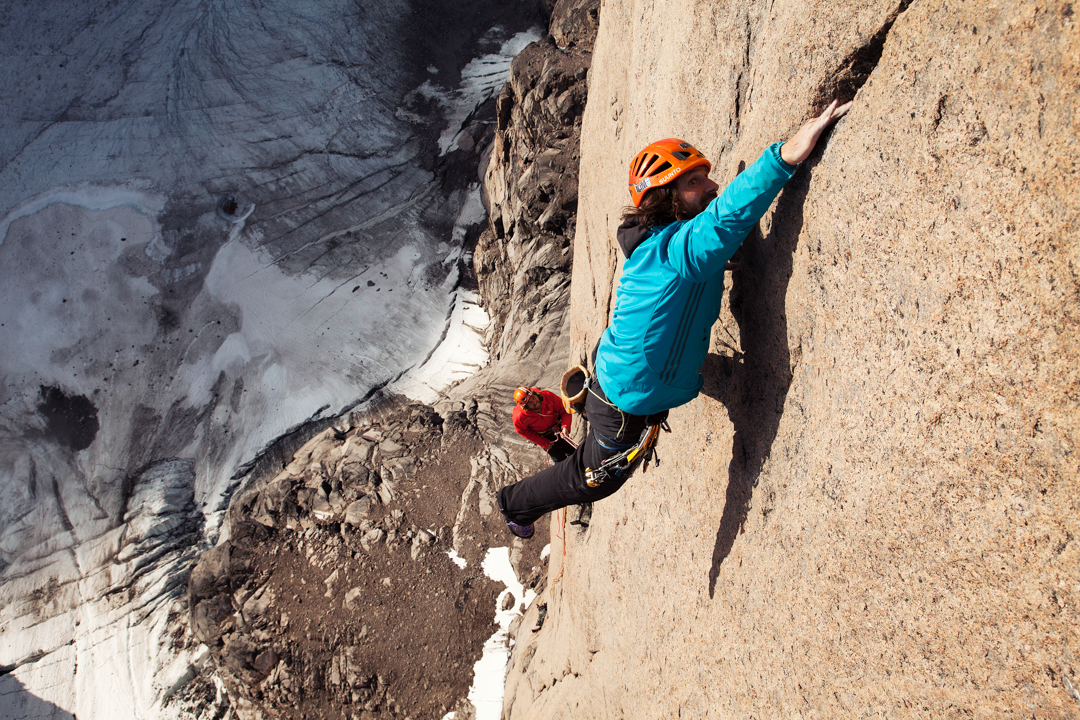 A couple of moves, no more than one or two meters. That’s not far. Not nearly as far as the 10,000km we have covered to get here and finally decode the moves needed to make it a full free climb. Ten-thousand kilometers for a couple of meters—isn’t that kind of crazy?

The dream had been around for some time. Our fascination with the Bavarian Direct (Bruckbauer-Grad-Guscelli-Reichelt-Schlesener; AAJ 1997) began in 1996 when we saw a slideshow from a successful expedition by our friends. Sitting with beers in a darkened room and listening to the hum of the projector, we realized from the photos that the Bavarian Direct could possibly be climbed free! For years, other objectives edged their way into first priority—El Capitan, Latok, Nameless Tower, Antarctica.

Then, in the summer of 2009, the Belgian team of Nico and Olivier Favresse, Sean Villanueva, Stephane Hanssens, and the Spaniard Silvia Vidal completed an 11-day push to try and free the route. They climbed up to 5.13b in headpoint style, but in the end they didn’t have enough energy to free the seventh pitch of the climb. It seemed up to us to see what we could make of it. We asked Mario Walder, with whom we had climbed in Patagonia and Pakistan, to join us for the expedition.

The 60km approach from the end of the fjord proved to be very long, and the approach couloir leading to the base of the climb looked like a battlefield. Rocks the sizes of half a car were lying around. Right at the start of the first pitch we were taken very much by surprise because Nico and his team had rated the whole business 7c. For us it felt more like 8a+. We thought, well, if that is supposed to be a 7c, then what will the crux be like? Is it possibly an 8b or harder? Would we be able to free it? The reality in the mountains, though, is that it’s often not enough to be a good climber with a whole lot of experience—you also need a bit of luck. We hoped luck would be on our side.

For some time, the weather was poor. We retreated to base camp, played cards, and told jokes. Eventually our patience paid off and the weather improved. The route proved incredibly challenging. You could easily end up falling 15m, and if you did that at the wrong point, you’d either end up dead as a doornail or severely injured. Even on the last few meters, Asgard did us no favors. What counts is that we managed to reach the top and find a way back to safety together, and at the end of the day we had a fantastic time. There was no hierarchy within our team, no envy on the mountain. We had a laugh together and we froze our butts off together. We reached the summit plateau on August 9 in moonlight, having completed a team-free ascent of the face by the Free Bavarian Direct (or Belgarian, 700m, 28 pitches, 8a+).

Overall, it was a brilliant performance by the first ascensionists in 1995 as well as by our Belgian friends in 2009. This legendary route, with its minute holds, is a real treat. It’s not often that everything falls into place.