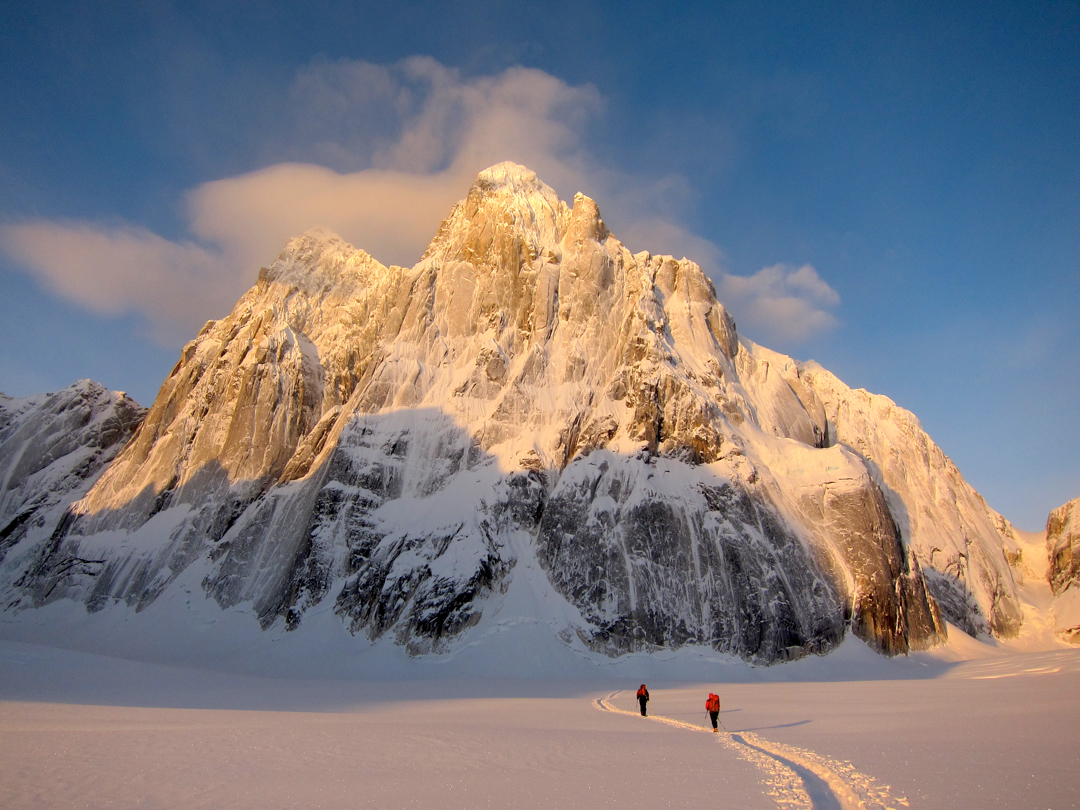 Our team arrived in Talkeetna on March 23. We took a scenic flight over the Buckskin Glacier and the Ruth Glacier to check snow and ice conditions on different mountain faces. We opted to go for the Buckskin Glacier, from which we thought we might be able to open new routes on the Mooses Tooth and Bear Tooth. On the following days the weather conditions were poor, but on March 26 Paul Roderick was able to drop us on the glacier. He was quite surprised by the amount of bread we brought to base camp—forgetting that the French love bread! We dedicated the first day to the installation of our base camp, and the second to a ski recon of the faces. From that point on we divided the team into two groups. Christophe would climb with Estelle Dall’Agnol, Max Bonniot, and Robin Revest, and I would climb with Jérémy Stagnetto, Romain Jennequin, and Simon Remy.

The wind blew hard on the spur where we were camped, and temperatures were very cold (–4°F). During the rest of the week, the weather was partly cloudy with snow on two days. On March 29, after a final check of their bags, Christophe’s team decided to start directly up their objective on the east face of the Moose’s Tooth. They planned to climb to the right of There’s a Moose Loose About This Hoose (Bracey-Helliker, 2008) and expected to reach the summit in five days, with one day to return to base camp. For safety reasons, they brought an extra day of food, which proved useful since they finally reached base camp after seven days of intense climbing.

The first part of their climb consisted of a steep gully, which contained difficulties up to 90° with a section of M6 and A3. Sometimes they had to use bolts at the belays. On day five, they reached the northeast ridge, from which they had a direct view of the summit. It wasn’t far, but a gigantic serac blocked access to the top. They first tried to go directly up the ridge, but the climbing proved too complicated. Finally, Christophe’s team decided, after much risk assessment, to cross the snowfield below the serac and climb to the summit on the far side. [Editor’s note: In 2008, Jon Bracey and Matt Helliker had decided to stop their climb at this point (AAJ 2009)]. Christophe and his team went as fast as they could to minimize the risk. The crossing turned out to be shorter than expected, and they finally reached the summit in deep, fresh snow. Their final summit push took seven hours. It was Christophe’s second time on the summit, after climbing it from the Root Canal. They called the route Magic Mushrooms (1,500m, ED 90° M6 A3), after the snow conditions, and descended the same route.

Meanwhile, our team was eager to finish our own route on the east face of the Bear Tooth. We had already fixed six pitches up a gully—just left of a massive, clean pillar—during the other team’s ascent. The climbing consisted of thin ice slabs covering a steep rock face. We spent two long days going back and forth from base camp to the face, preparing for our big attempt. The weather was sunny and still very cold when we left for our final push. We hoped to exit the gully in three full days. During our second day on the wall, we decided to leave our heavy equipment at the bivouac. We knew that we had only two days of good weather remaining and wanted to be as light as possible so that we could exit the gully by nightfall. After 18 hours of climbing, though, it was already midnight, and we sadly accepted that we would not make it. We were frozen, the technical difficulties were very demanding, and the night climbing made any further progress impossible. We were truly disappointed to descend after two bivouacs and 900m of climbing.

Upon returning to base camp, we thought it would be impossible to return to our line on the Bear Tooth. There were too many runouts, and the barely-there ice in the gully had been severely damaged by the four of us. The decision to pull our fixed lines seemed to make it final. However, four feet of snow fell in the following two days.The snowfall gave us some time to think calmly and recharge. Eventually, we decided to return to our line. It would be “Kiss or Kill.” The line was really worth it.

The next day we left camp at 3 a.m. with four days of food. Motivated, we surmounted the first ice slabs before midday. The weather forecast suggested temperatures around –20°F, but the actual temperature was closer to 35°F, generating a decomposition of the gully. Again, doubt was cast; we had to wait almost three hours before we could restart climbing. We reached the bivouac at midnight. It was too small for a tent, resulting in a short and uncomfortable night. We started climbing again by 4 a.m., and by the end of the day we finally reached the shoulder. While searching for a bivouac location, I released a monster avalanche by breaking a cornice, stirring all of our emotions. On the summit wall, we followed a very logical diagonal line up a gully. To exit the gully, we were forced to make a hole in the cornice with our shovels. On the ridge, there were still difficult sections to climb, and I was quite surprised after I fell on one section. We needed the entire day to reach the summit from the base of the summit wall. Once on top, our emotions were intense, and we shouted loudly in celebration of our win: Bear Skin (1,350m, ED+ WI6+ M5 A1). We began our descent at 9 p.m., admiring the northern lights most of the way down.