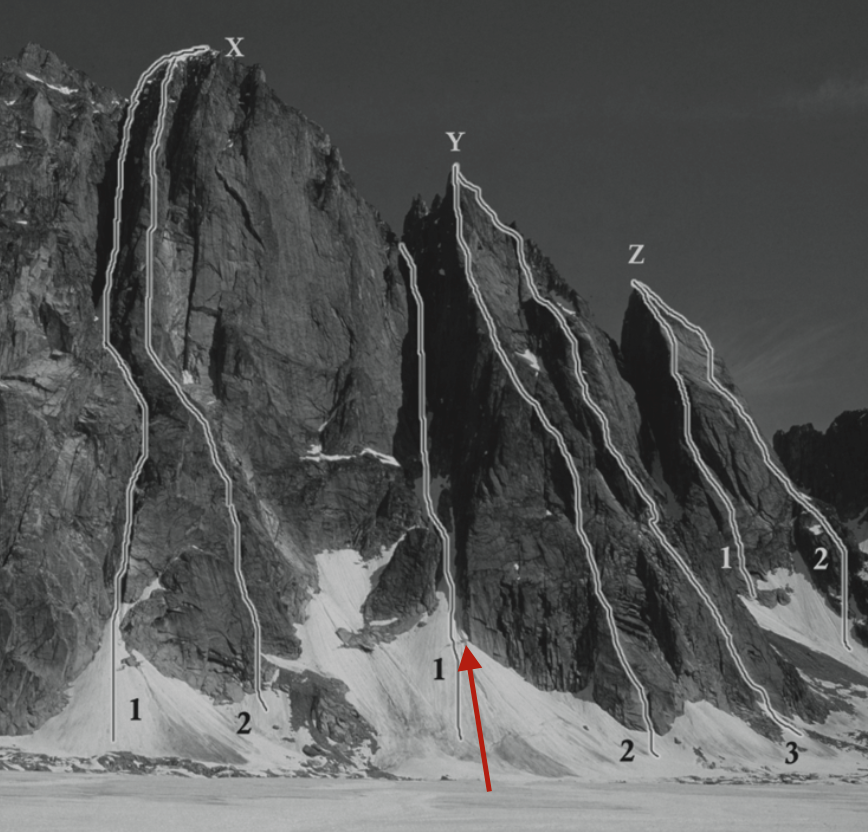 On May 24, four members of an expedition were flown on to the Ruth Glacier with the intent to climb several surrounding snow and ice routes. Weather conditions in the area (4,500 feet) were unseasonably warm, with nighttime temperatures consistently above freezing. Over the next several days, the team made early morning attempts on the Japanese Couloir of Mt. Barille and the west ridge of Mt. Dickey. In both cases, they aborted their climb because of signs of rapid warming in the snowpack. Because of the unfavorable climbing conditions, two members of the team elected to fly out on May 28, two days before their scheduled pickup. Canadians Andrew Herzenberg (39) and Israeli Avner Magen (42) opted to stay in and make an attempt on Freezy Nuts, a 2,500-foot snow and ice gully between the Werewolf and Hut Towers.

First climbed in 1996, this route is widely considered an up-and-coming classic because of its easy approach and relatively moderate climbing. The route is very narrow (less than ten feet wide) for about 1,500 feet and has a steep 600-foot headwall. The route is exposed to hanging snow and ice on adjacent rock walls. According to past trip reports, an average time for a team to ascend and descend this route is about 12–15 hours.

According to other climbers camped nearby, the pair left camp to begin their ascent just before 1 a.m. on May 29. Photographs recovered from a camera show 6- to 12-inch boot penetration during their ascent of the lower portion of the route, indicating that early morning temperatures had not allowed for a surface freeze.

Sometime in the early afternoon on May 29, a climber also camped in the Ruth Gorge area witnessed a “sizable” avalanche come down the Freezy Nuts gully. Unaware of the deceased pair’s exact plans, the reporting climber only became concerned when they did not return to their tent by that evening. The reporting climber decided to ski across the glacier to where he could see the debris cone at the base of the gully and noticed what appeared to be scattered equipment and possibly a body. At 8:56 p.m., the climber spoke with NPS staff in Talkeetna via satellite phone and reported his concerns.

At 10:20 p.m., two NPS ranger staff departed Talkeetna via helicopter to pick up the reporting climber and investigate the incident site. Upon arrival, two bodies were immediately spotted, on the surface and along the leading edge of a relatively small debris cone. The helicopter was able to land safely at the toe of the debris to within 100 feet of the bodies and rangers were able to exit the aircraft and confirm the two climbers’ deaths.

Due to the late hour, the helicopter and crew returned to Talkeetna that night. The bodies and equipment were recovered the following morning via NPS helicopter and were transferred to the State of Alaska Medical Examiner in Talkeetna.

Although Freezy Nuts is slowly gaining a reputation as a classic moderate snow and ice gully, it is an extremely recessed and narrow route subject to substantial objective hazards, particularly in poor weather conditions, such as after new snow or during warmer temperatures. Much of the route acts a funnel for sliding snow or falling debris.

Beginning on May 24, many climbing parties in the Ruth Glacier area reported a rapid warming trend and subsequently altered their climbing objectives. According to the deceased pair’s climbing partners, they were concerned about the snow conditions before their climb on May 29. They chose to mitigate the hazards by climbing during the coldest hours and, according to a short audio clip recovered from Avner Magen’s camera, they seemed prepared to turn around at any point.

Although it is impossible to say exactly what ensued during their ascent, the end result is that they fell to the bottom of the climb while descending. The last of their photographs showed them about midway down the climb, one belaying the other downclimbing. Their ropes were found attached to one of the climbers, rigged for rappel. It is possible that either a fall occurred or that a rappel anchor failed, and that the avalanche that occurred was the result of, or even secondary to, their fall. However, given the weather history and the signs of instability in the area, it is likely that an avalanche caused the fall. The debris cone at the base of the gully was one of several cones that had likely occurred over the past week. Each of these avalanches can be characterized as having a relatively small destructive force and small to medium dimensions; however, because of the large vertical fall of the debris, the consequence of being carried would be very high. This particular avalanche may be characterized as WL-U-R3-D2: a wet loose-snow avalanche, unknown trigger, medium size relative to its path, and small relative to its destructive potential.

It is not clear when Herzenberg started climbing mountains, but Magen was an accomplished mountaineer and chronicled his climbs from all over the world on his website. This was their first climbing trip in the Alaska Range. According to their climbing partners, they both had some experience with ice climbing and mountaineering.

Although it’s difficult to conclude the exact cause of their accident, it is safe to say that the warm conditions on May 29 gave them a smaller margin of safety. (Source: Mik Shain, Mountaineering Ranger.)

This incident is featured in the Sharp End podcast from May 2016.

Editor’s Note: In a press release by Raveena Aulakh from the Toronto Star, we learned something about these two men, information not normally found in official reports:

“On Monday, shocked friends and colleagues in Toronto [date unknown] were trying to come to terms with the loss of two men described as ‘brilliant.' 'It’s a very tough time for everyone in the department,’ said Craig Boutilier, chair of the U. of Toronto computer science department. where Magen was an associate professor.

‘One thing to know about Avner is that he was a fantastic researcher... The stuff that he researched wasn’t esoteric but was very deep theoretically,’ said Boutilier.

“In another comer of the city, Herzenberg’s colleagues at laboratory medicine and pathobiology department in the Faculty of Medicine at University Health Network were trying to understand the sequence of events. ‘He was dedicated to research in kidney pathology, he was very generous as a collaborator with other physicians and scientists, and he was an excellent teacher,’ Richard Hegele, chair of the department, said of the assistant professor. He enthusiastically participated in training of new generations of specialists.’"