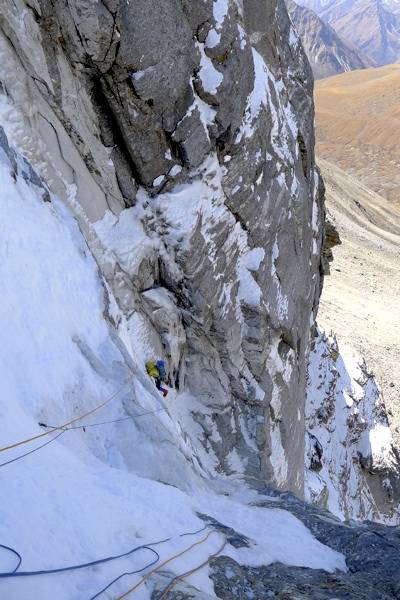 In October Dave Turnbull and I, with Graham Desroy and Jonny Ratcliffe, visited West Nepal. Graham and Jonny’s activity is recorded below. Dave and I made the first ascent of a mountain called Gojung. Formerly referred to as Mugu Chuli, this summit is situated in the remote Kojichuwa Valley, above the village of Mugu, a region little traveled by any foreigners, let alone mountaineers. During our three and a half weeks in the area, we saw only one other western visitor.

As you would expect, the climbing history of this valley is sparse. The first mountaineers to carry out reconnaissance were most likely Mallorcans in 2008. Their goal was to inspect unclimbed Kojichuwa Chuli (6,439m), situated on the Tibetan border in the northeast corner of the valley, for a serious attempt the following year. However, they noticed a 6,310m peak on the frontier ridge to the south, which they described as “outstanding” and dubbed it Mugu Chuli, being unaware that it had the local name Gojung.

The Mallorcans returned in April 2009, with both peaks on their list, but were not successful. Just as they were leaving, Nick Colton, Ed Douglas, Julian Freeman-Attwood, and Rob Greaves entered the valley and proceeded to climb six peaks, between 4,900m and 5,400m. They also noted an ice/mixed line on the west face of Gojung, and Ed Douglas was kind enough to send me a photograph.

After a seven-day trek from a small airport close to Rara Lake and three days of acclimatization on peaks up to 5,300m, Dave and I set off from base camp to bivouac at the foot of Gojung’s west face. Over the next four days we climbed the attractive central ice line. Benefiting from a previous heavy monsoon and very cold but stable weather, we found the initial 300m couloir in excellent condition. An icefield was then followed by steep mixed climbing and a scenic rising traverse over ice/mixed terrain, to reach the upper section of the face. A final mixed barrier gave access to summit slopes, and we made a fifth bivouac (above base camp) close to the summit.

Next day started fine, but, as we made a 10-minute ascent to the summit, a storm was building in the west. Prior to the expedition we had been unsure how to get off Gojung, but once in the valley we decided on a pleasing-looking, though long, descent to the north. Rappelling the ascent line would not have been aesthetically pleasing so, despite incoming weather, we committed to the original plan. Having made a tricky descent northeast to the col between Gojung and Peak 6,264m, we bivouacked and next day crossed the virgin 6,264m and continued north along the frontier ridge. With the weather still not clear, we were forced to bivouac again. Fortunately, we awoke to a perfect dawn and started down the previously scoped line on the west flank. After a long day we reached the valley floor and bivouacked for our eighth night. A tedious slog across glacier and snow-covered moraine then saw us reunited with the rest of the team.

In the meantime Desroy and Ratcliffe had explored the head of the valley and climbed an unnamed 5,800m peak on the frontier, west of the Kojichuwa La, which gave a loose scramble but fine views of Tibet and Kojichuwa Chuli. They also attempted unclimbed Peak 5,623m, on the east side of the valley, but retreated a few ropelengths below a col at the base of an easy-looking summit ridge, when snow and ice slopes disappeared into some of the worst rock imaginable.