Looking through descriptions of routes on Khan Tengri, we two were surprised to find that the southeast ridge, the longest of the four ridges of this fine pyramid, was still unclimbed. Had no one tried this logical, alluring line?

The ridge had been climbed in parts in the early 1970s. In 1970 Bozhukov (leader), Kurochkin, Nevorotin, Soustin, and Zakharov climbed Pik Zholak-Too at the end of the ridge and traversed north along the “saw” On the second step a cornice collapse sent three climbers falling more than 500m, though they escaped with their lives. The remaining climbers retreated. Three years later the Uzbek Soviet Socialist Republic national team, 10 climbers led by Voronin, reached the crest at a point close to where Bozhukov had turned back. Starting on August 14 they completed the remaining ridge, reaching the summit on the 26th. No one had attempted this ridge since nor tried to complete Bozhukovs dream. We were attracted by this project, particularly because in 2010 wed traversed Pik Communism (7,495m).

We arrived at South Inychek base camp in late July and at 5 p.m. on the 29th headed toward the start of our route. Next day we spent several hours watching stonefall in the crumbling rocky couloir leading to the top of Zholak-Too, trying to figure out the safest route. The ascent proved unexpectedly long, and we didn’t reach Zholak-Too until midday on August 1. We then had to traverse the endless “saw.” The first two days were demoralizing, as we didn’t seem to be making progress. The traverse was spectacular and technically varied. We had to negotiate huge cornices, a knife edge, and two big rocky gendarmes and had to cross a glaciated slope with unreliable snow bridges. It took us more than six days to cover 3,000m along this ridge, which rose from 4,480m to 5,300m.

We spent the next six days traversing 2,300m of crest, to 6,250m, following the route pioneered by Voronin. The weather was unstable, hampering progress, and on the 11th we were forced to remain in the tent the entire day. On other days we completed only two or three pitches. In places the ridge widened, and we moved together, but cornices became bigger, and we encountered crevasses and seracs.

Starting on the 12th we had three days of calm, warm weather. The final part of the ridge, which took a further seven days, began with a snow plateau and a rocky rib, leading to overhanging ice walls. The rib was marble, at 30-35°. We had to keep to the ice on the flanks, as it was impossible to safely belay on the crest. Dare we say it was fun? The next three days unstable weather again confined us to the tent for long periods. Near the top a three-m overhang on an icewall, leading to 60-70° ice and névé, provided the crux. Finally we reached the summit, but where was the cairn? We had to descend 50m to the first rocks to find the cherished metal tripod. It was 3 p.m. on August 19.

While the ascent of the complete southeast ridge was difficult (6A), the normal descent to the south is dangerous, despite the ridge to the col being completely fixed. Our food and fuel gone, we made drinking water by melting snow under our armpits. We barely reached the col on the 20th, and, although wed hoped to descend to the standard Camp 1 the following day, bad weather intervened once more. Having to break trail, we only got to Camp 2. Next day we kept to the left side of the glacier, as it was safer, and erected our tent, in the dark, close to Camp 1. Normally it would take a couple of hours from there to base camp, but we didn’t arrive until 5:00 the following afternoon. Fortunately, next day people were leaving, and we hitched a ride in a helicopter.

[Editor’s note. From July 22 to August 20, 2010, the pair made an unsupported southeast-northwest crossing of Pik Communism (7,495m). They made a long approach from the south, over the Kashalayak Pass (4,281m), along the Fedchenko and Bivachny Glaciers, to the southeast side of the mountain. From there they followed the 1961 Tamm Route across the southern flanks of the southeast ridg. From the summit they descended the classic 1968 Barodkin Route to the Moskvina base camp. Total distance covered was ca 120km, and the initial weights of their rucksacks were 43kg each.

Paradoxically the two Russians are not considered “alpinists.” In the Russian ranking lists they are “mountaineering hikers,” and hence this and their Communism traverse were not registered with the Russian Mountaineering Federation.] 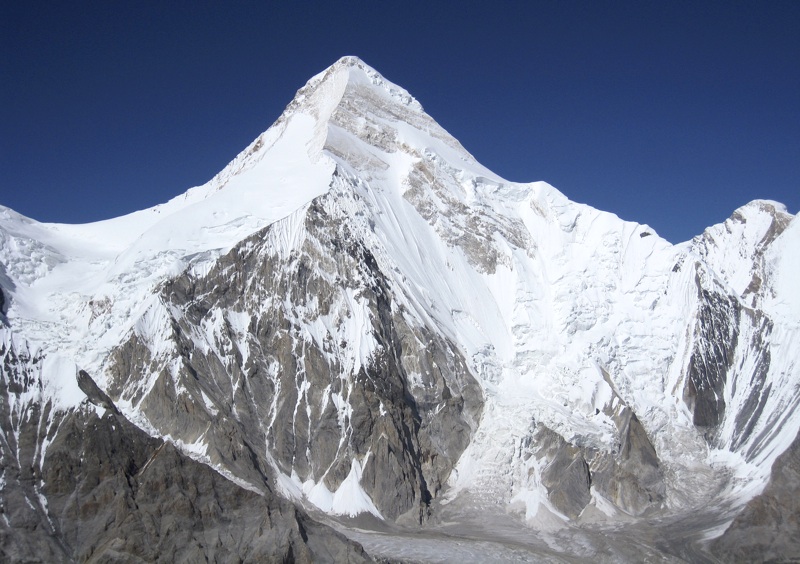 Khan Tengri from Inylchek Glacier. Southeast ridge is right skyline, while Normal route follows glaciated slopes to col on left side of picture, then up skyline (west) ridge. Toward top of southeast ridge pair traversed left below ragged capping seracs until finding a break about midway.
Andrej Magajne

Crossing one of many cornices on southeast ridge.
Supplied by Anna Piunova, Mountain.ru

Foreshortened view along ridge to summit.
Supplied by Anna Piunova, Mountain.ru
Previous Next

Khan Tengri from Inylchek Glacier. Southeast ridge is right skyline, while Normal route follows glaciated slopes to col on left side of picture, then up skyline (west) ridge. Toward top of southeast ridge pair traversed left below ragged capping seracs until finding a break about midway.
Andrej Magajne

Crossing one of many cornices on southeast ridge.
Supplied by Anna Piunova, Mountain.ru

Foreshortened view along ridge to summit.
Supplied by Anna Piunova, Mountain.ru
Previous Next