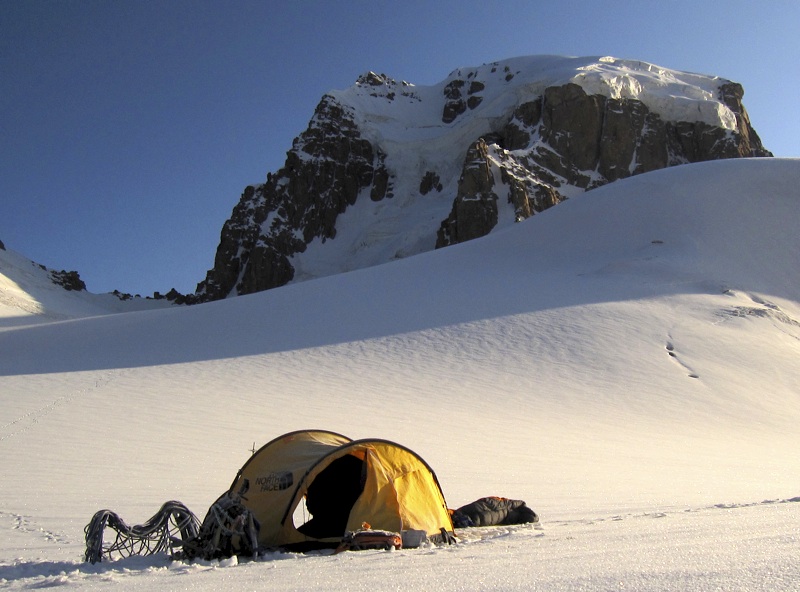 Our group of eight was inspired by photographs provided by Paul Knott, who visited this area in 2005 (AAJ 2006). We had a variety of ideas of peaks to attempt and ski descents to make around the heads of the Kotur and Fersmana Glaciers. We allowed 24 days for the round trip from Slovenia, which gave little margin for error. We ended up having an adventure beyond our expectations.

The team, comprising climbers with a wide variety of age and experience, had multiple aims: to give younger members their first experience of higher altitude glaciers and mountains, to ski from summits up to 5,000m, to climb new routes up to 5,000m, and to make the first ascent of Pik Byeliy, the highest unclimbed independent summit in the Western Kokshaal-too.

Deciding not to use porters, we took only a driver and cook, who would remain at base camp. We left Bishkek on July 17 and next day reached 3,500m, before being stopped by a 30-hour snowstorm. When this cleared, our Ural truck got stuck in mud, and we spent the best part of two days digging it out. It was only on the 22nd that we set up base camp north of the Kotur Glacier, already acclimatized to altitudes over 4,000m.

Next day Peter Bajec, Ursa Erman, Alenka Klemencic, Miha Lapanja, and Tina Leskosek climbed Pik Alpini (4,578m), on the east side of the entrance to the Kotur, and continued south to Pik Lvitsa (4,631m). Klemecic and Lapanja skied from the summit. In the meantime I suffered a slipped disc, reducing our experienced climbers to two: Tadej Golob and Blaz Grapar. They ascended easy Pik Lyev (4,710m) and slept on the summit for acclimatization.

With this first phase complete,Klemencic and Lapanja walked to the next glacier system east, the Nalivkin, and set up camp below the east flank of Pik Obzhorny (5,156m). At the same time Bajec, Erman, and Leskosek skied up the Kotur to camp on the west side of Obzhorny. Over the next few days various members from both parties made ascents, and often ski descents, of Pik Greta (4,725m), Pik Lencka (4,621m), Pik Oleg by a likely new route dubbed Arbuz (450m, 60°), and Pik Obzhorny. They returned to base camp at around the same time that Golob and Grapar completed a taxing two-day, 30km walk (with 2,000m of height gain), east along the top of the range and then south up the arduous Fersmana Glacier to the Chinese border.

On the 27th Golob and Grapar camped at 4,900m on the frontier ridge, at the col immediately south of Byeliy. Next day they completed the line up the south ridge attempted by a Slovenian expedition in 2008 (AAJ 2009). Although much of the terrain was straightforward (they only belayed two pitches), there was a significant amount of climbing beneath a large serac barrier. The 600m Slovenian Route was graded V/4.

Bad weather then settled on the range, and despite one or two attempts, the only subsequent successful ascent was another (and ski descent) of Pik Alpini. However, in brief gaps of sunshine the team did find excellent bouldering, before packing the six- wheel truck on August 3 and leaving for Bishkek.

It turned out that our forced acclimatization at 3,500m during the drive to the mountains positively influenced subsequent activities above base camp. In addition we found snowshoes better suited than skis for reaching more serious climbs. We thank Turkish Airlines for flights and special treatment of our skis and acknowledge the efficiency and kindness of ITMC staff: Margarita, for solving organizational problems; Andrey, for excellent driving; and Tanya, for being the best expedition cook. We are indebted to Gregor Sluga and Janez Toni for weather forecasts.

Editor’s note: The 2008 Slovenian high point on Byeliy was lower than inferred in AAJ 2009. It is indicated on the photo accompanying this report. Also, there now appears to be doubt as to whether this expedition reached the summit of Pik Plaza (4,912m).