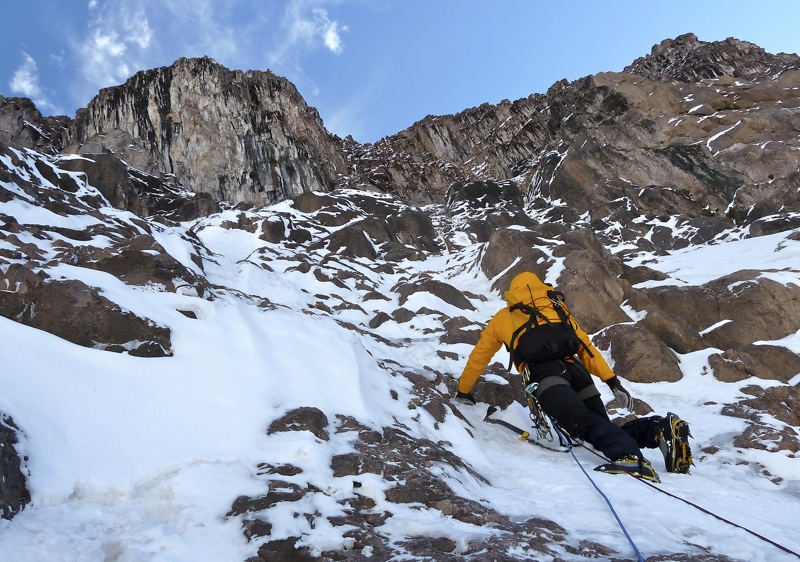 After four days acclimatizing in Puno, Hamish Dunn and I arrived in Macusani (4,300m), the nearest town to the southern side of the Carabaya, to discover that nobody spoke English or understood our limited Spanish. We were lucky to bump into Daniel, an English-speaking Spanish priest on a year’s exchange. After much explaining on our part, he finally understood where we wanted to go. (In Lima we had failed to locate a map to the area.) Daniel kindly drove us to the road head and arranged for two donkeys to carry our gear to Laguna Chambine, where we planned to camp.

After acclimatizing sufficiently and making a reconnaissance of Chichicapac’s unclimbed south face, we returned to base camp and sat out a period of bad weather. On August 22 we made the first ascent. The most obvious route was threatened by seracs, so we climbed a direct line up the center of the face, encountering sustained and insecure mixed climbing, until the top headwall forced us left. A short but loose rock chimney led to the upper section of the face, where a long tricky pitch, followed by easier, loose terrain, led to an easy snow slope and the summit plateau.

We summited just before 5 p.m., having spent 10 hours on the face. Anxious to get off the mountain in daylight (sunset was at 5:30), we quickly descended the west ridge and made a short rappel onto a small glacier, which led us to back to our bivouac tent. The majority of the face had involved mixed climbing, with powder snow on loose rock. The rock was generally terrible and protection sparse. The face is more than 600m high, and our route had an overall grade of TD, with sustained difficulties of Scottish 4/5 and two crux pitches of 6.

After this somewhat harrowing experience, neither of us felt like more dangerous climbing, but before leaving we climbed a rock route of about British VS standard on a crag above base camp.

There is much potential in the Carabaya for new routes, and it is a cheap, hassle-free place to reach. We thank the Alpine Club, British Mountaineering Council, and Mount Everest Foundation, without whose financial support the expedition would not have taken place.

[Editor's note: Chichicapac is the second highest summit in this range east of the Cordillera Vilcanota, rarely visited by climbers. It was first climbed in 1959 by the notable Italian explorer Piero Ghiglione, with Forrunaro Mautino (and repeated a few days later by a British team). In 2005 John Biggar, Pere Vilarasau, and six clients added a new route up the east glacier and northeast ridge, making what appears to be the first recorded new route in the range since 1981, a date more or less confirmed by a local farmer, who remarked that no climbers had been there for more than 20 years. In 2007 Chichicapac’s south face was the main goal of a strong British team, but they judged it too dangerous and instead made the first ascent of the mountain’s north ridge (AAJ 2008).]