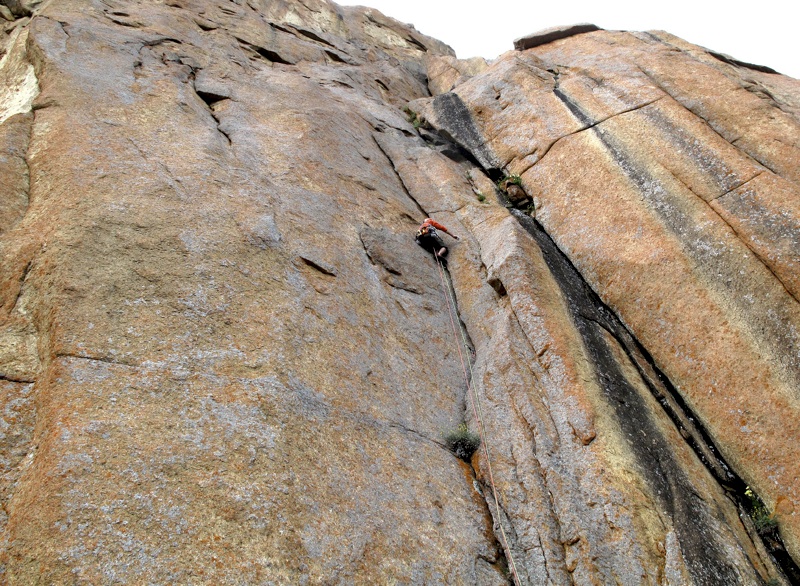 Following our successful campaign in 2010, we returned in July 2011, with a strong group mainly of Italian guides, to blitz the Uummannaq and Upernavik regions, adding a number of routes. The group operated from Mariacristina Rapisardi’s super-yacht, Billy Budd. Along with Rapisardi, the main climbers were Luca Argentero, Alberto Bianchi, Marco Frezzato, Michele Maggioni, and Beppe Villa.

On the 13th, on the sea cliffs on the west coast of Agparssuit at 72°40'17" N, 55°54’6" W, the whole group put up two 350m routes that intersect at two-thirds height: Lost Images (6c) and Dedicated to You (6b+). On the 15th Argentero, Maggioni, and Villa climbed the 450m Little Auk (7a) on Red Wall (72°39'24" N, 55°52'48" W). This route lies on the east face, well right of the 2010 routes, Red Chili Crackers and Seagull’s Garden (AAJ 2011). The following day, farther west along the coast of Qaersorssuaq Island at 72°40'29" N, 55°58'38" W, all the group climbed the right side of the south-facing rounded granite dome of Iterdlagssuaq to produce Isabella (300m, 5c). This route lies well right of the corner system of Old Man’s Benefit (200m, British HVS 5a, Howard-Shepton, 2009), and between this and original route on the face put up in 2006 by Gianni Predan and Mariacristina Rapisardi (200m, British Hard Severe). Members of the team also climbed the first five pitches of Arctic First Born (800m, British E3 5c A3+) on the northwest face of Sanderson’s Hope, the first big wall route on this large slabby sea cliff(and the first on a large sea cliff above the Arctic Circle on Greenland’s west coast). These were climbed “just for interest,” but while making a rappel descent, they placed two bolts to the left of the route.

It is good that this area around Upernavik is at last beginning to realize something of its potential. However, as the instigator of technical climbing on the west coast of Greenland, and especially in the Upernavik area, may I make an appeal that these pristine walls be climbed without recourse to bolts. Completely blank sections on big walls may provoke an exception, but several fine, technically hard lines have been climbed without use of bolts.