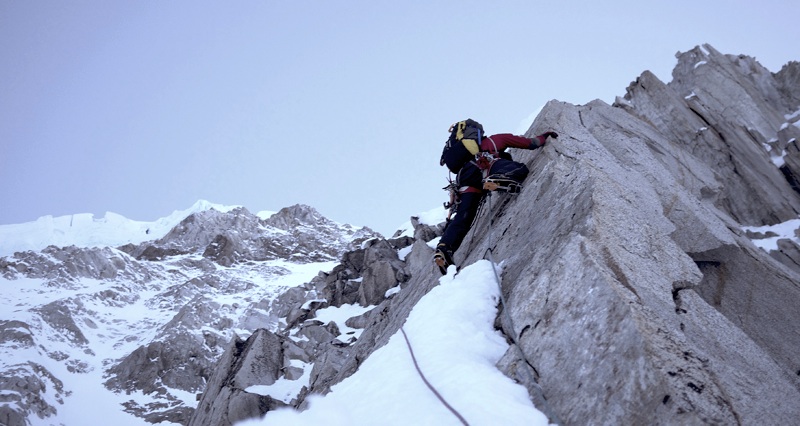 In the first week of May, Mark Allen and I set up base camp at Kahiltna International, then headed off for the rarely visited northwest fork of Lacuna Glacier. We had learned about the Lacuna the previous winter, while digging around for objectives. An aerial photo showed big steep faces cleaved with gorgeous ice and mixed lines. We found no evidence of anyone having visited this area, so we set our sights on gaining access and sending its virgin peaks and routes.

On our first trip it took three and a half days to reach the northwest fork, due to avalanche-prone slopes and icefalls. We followed the route described by Joe Puryear in his Alaska Supertopo guide. We reached the east fork of the Lacuna, below the south face of Foraker (as for the approach to the Infinite Spur), and continued across the heads of the Lacuna, through two more major icefalls, the second of which proved the main route finding crux. This placed us directly below the eastern aspects of the Fin, the unclimbed summit of Peak 12,213', and below the west face of Foraker.

Due to lack of objective hazard and its aesthetic lines, Peak 12,213' was the obvious choice. The following morning, May 9, we headed for what we named the Lunar Spur, which follows the right-hand margin of the south face. We spent a day and a half on this line, climbing to M5 and AI2, before being turned around on the upper ridge by bad weather and dangerous snow. Our attempt began with brilliant mixed climbing but was followed by a knife-edge choss ridge covered in two to four feet of unconsolidated powder. Concluding that conditions needed more time to become favorable for climbing, we returned to Kahiltna base camp, this time making the crossing in two days.

After a week and a half resting and climbing other objectives, we returned to the Lacuna, taking two days to reach the northwest fork. With a better handle on conditions, we opted for a central rib on the south face. On the evening of May 23 we left bivouac gear on the glacier and moved quickly up the dihedrals and flakes of a 2,500' granite buttress, which narrowed to a technical knife-edge ridge. We found fantastic sustained mixed climbing up to M6, with some AI2 and A1. Above, a 1,000' couloir led to a ridge that cruised another 1,000' to the summit. However, once we were on this ridge, black clouds greeted us, forcing a quick retreat. We referred to the line followed on this attempt as the Nebula Arête (after the LA band Nebula).

Next day, May 26, we woke to clear weather and found that not enough snow had fallen to create avalanche conditions. With limited food remaining, we decided to use it on one more attempt at Peak 12,213', this time via the central couloir on the south face. We left that evening, finding perfect névé, and blasted to the summit ridge in less than six hours. Passing our previous high point, we reached the summit in another hour, making the first ascent of what we named Voyager Peak, after the Voyager satellite; we named our route To The Center (4,500', AK4 AI2). We descended the southeast ridge and southeast buttress, mostly using anchors from our previous attempts.

The following day, with only four oatmeal packets between us, we skied back to Kahiltna base camp in 13 hours, motivated by the food and whiskey that awaited us. Huge thanks to the support provided by the Mt Everest Foundation, the NZAC, and Outdoor Research.