Deep in the Alaskan Bush 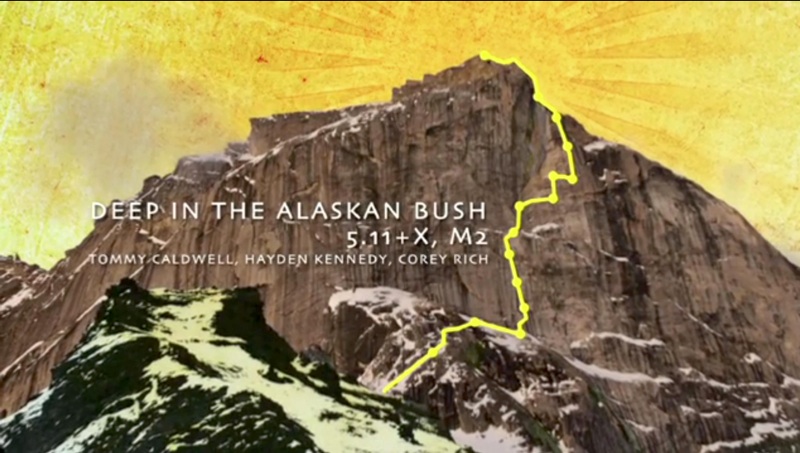 In mid-April photographer Corey Rich asked if I wanted to join a 10-day climbing trip in the Brooks Range with the man himself, Tommy Caldwell. How could I say no? The trip came together last minute, and we didn’t even know where we were going to climb. The bush pilot dropped us in the snow alongside Awlinyak Creek, and we skied 20 miles to our base camp. Snow conditions were less than ideal, but the wildlife was spectacular. We saw caribou and white wolves and even had a run-in with a grizzly. A few days of rest in base camp gave us the opportunity to scope the peaks and climbing objectives. Tommy, Corey, and I settled on a steep unclimbed wall right of the west face of Xanadu. The west face of Xanadu looks like an amazing objective but would require a portaledge and much more time.

From a bivouac two hours below the face, we scoped a good line that followed the weakness up corners to a right-trending ramp system. In the morning we left early and approached up easy mixed terrain. Tommy took the first block and led run-out 5.11 face pitches to a large corner. Once we reached the corner, the climbing eased to 5.10 on perfect buffed granite, and Tommy led three pitches to a large ledge. Corey and I followed with jumars. I was impressed with Corey, since this was his first time alpine climbing. He kept a positive attitude, did his share of the work, and had all of his camera gear.

I started leading off the large ledge at the top of pitch seven and found an easy ramp trending right. The climbing was loose and run-out 5.9, with limited anchors. Tommy and Corey followed by climbing, because the anchors were not strong enough to jumar from. After four easy pitches on the ramp, the wall got steep again and the rock improved. I led the crux of the route up 5.11+ edges, with no gear for 50' above the anchor. At the end of the pitch, I reached a small corner, where I was able to place gear. I led one more pitch of 5.10 to a large snowy ledge just below the summit. We regrouped and found easy climbing up a ridge to the summit, having climbed 15 pitches.

The views of the Arrigetch Peaks were unreal; the west face of Xanadu looked like Half Dome. We didn’t want to leave all our gear rappelling, so we climbed a knife-edge ridge toward Xanadu. The ridge took us to the base of the west face of Xanadu, where we made three easy rappels. We hiked back to base camp in the evening light, after an awesome adventure Deep in the Alaskan Bush (5.11+X M2).

To see a short film on the expedition by Corey Rich, visit nikonusa.com and search on “Deep North.”