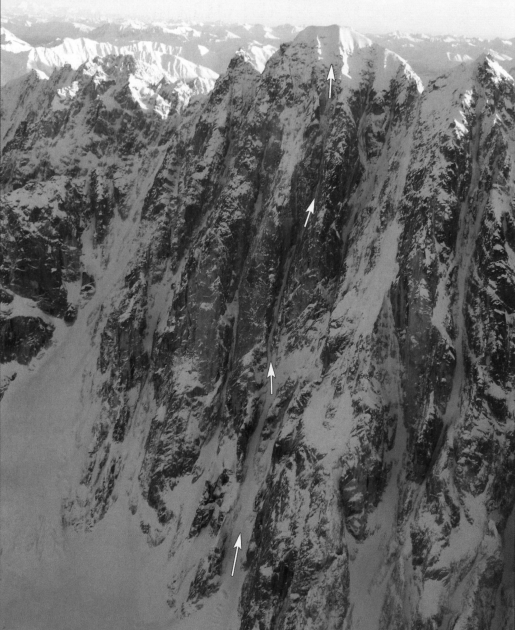 From 377 to 353 B.C., the city of Halicarnassus on the shores of the Aegean Sea was ruled by a king named Mausolus. During his reign he expanded his empire, seizing control of many neighboring cities and much of southwest Asia Minor. When he died in 353 B.C., his wife Artemisia, who was also his sister, erected a large tomb, designed by six of Greece’s most prominent architects and sculptors. The 148-foot-tall marble edifice was decorated with statues of gods and goddesses, warriors on horseback, lions, and spear-wielding guards. Crowning the tomb’s pyramidal apex was a chariot pulled by four horses carrying Mausolus and Artemisia, all in marble. The Mausoleum was so magnificent that in 140 B.C. Antipater of Sidon declared it one of his Seven Wonders of the Ancient World. For more than 16 centuries the Mausoleum towered over Halicarnassus, even after being conquered by Alexander the Great. Now, thanks to earthquakes and pillaging, little remains of the once glorious shrine.

Hidden deep in Alaska’s southwest wilderness, the hallowed Revelation Mountains hold more myths than truth. Rising tall and solemn against a backdrop of untrodden landscapes, Mt. Mausolus (9,170 feet) is one of the range’s greatest wonders. In 1967 a party led by David Roberts spent 52 days exploring and climbing in the Revelations. On the flight in he noticed the “hopeless labyrinth of Mount Mausolus,” calling it “perhaps the toughest climb in the range” (AAJ 1968). Like the columns of the tomb, massive granite prows soar skyward, supporting the marble-white upper mountain. An army of gendarmes on the north and south ridges guard its summit pyramid. Precarious hanging glaciers adorn towering golden walls.

As if forgotten by time, Mt. Mausolus was still unclimbed when I discovered it in 2007. Perhaps it was the Revelations’ isolation, its reputation for heinous weather, and a lack of information that explained its virginity. A single photo of Mausolus’s 4,500-foot west face, taken by a local pilot, brought me to the brink of obsession. The photo revealed a steel-gray dagger of ice plunging directly from the summit like a spear cast from Mausoluss soaring chariot. 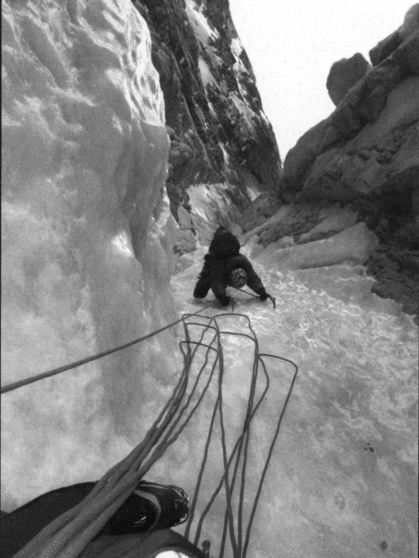 In 2008 Steve Sinor, Seth Holden, and I landed northwest of Mausolus on the southwest fork of the Big River Glacier. An avalanche-prone pass kept us from seeing Mausolus. We focused elsewhere, including the first ascent of Exodus Peak (AAJ 2009). Seth and I returned in 2009 and encountered similar avalanche conditions to those that kept us from Mausolus. On the first ascent of the Ice Pyramid (AAJ 2010) we glimpsed Mausolus’s spectacular west face. After two trips we had solved many of the Revelations’ access problems, so we vowed to return for Mausolus the following year.

In May 2010 Dick Barber landed Seth and me on the boulder-strewn Swift Glacier on his third attempt. As in the photo, a large couloir arched up to a steep vein of ice that coursed straight to the summit. The mountain flaunted its defenses. Avalanches roared as we cowered like slaves at the feet of a king. At dusk the mountain slumbered, and the avalanches ceased. Conditions firmed and seemed temporarily safe. Seth and I couldn’t resist. That night we simulclimbed almost 2,000 feet, to the start of the real technical difficulties. Knowing that the veil of safety would soon lift with the sun, and Mausolus would awaken, we descended with heavy hearts.

On August 24, 2010, Seth died in a small plane crash not far from the Revelations. Only 30 minutes prior we had discussed our strategy for Mausolus. We had concluded that to stand any chance of success, we needed to attack before the increasingly warm spring sun reached the west face. Now I questioned whether I had the emotional tenacity for an attempt without Seth. The vision of Mausolus had been his as much as mine.

On March 13, 2011, Scotty Vincik and I flew west from Anchorage. Rob Jones’ Super Cub bucked through turbulent downdrafts as we flew 160 miles toward the Swift Glacier. The infinite wilderness, frozen under Alaska’s barren winter, heightened my sense of the oncoming isolation. Soon the unmistakably jagged profile of the Revelation Mountains cut the horizon. My eyes were fixed solely on Mt. Mausolus, a dozen miles southeast of the range’s main spine. I had seen this view numerous times, but still my stomach twisted in knots. Without even a satellite phone, we would be completely alone.

After repeated efforts Jones landed us on the Swift Glacier. As we set up camp, the west face reared overhead with oppressive authority. Scotty and I wasted no time. An unprecedented high pressure system had been sitting over south-central Alaska for a month, but we knew it wouldn’t last much longer.

We crossed the bergschrund early on March 15 and simulclimbed to the 2010 highpoint, veering slightly left to gain the most direct line on the face. A thin WI4 smear provided narrow passage around a major slab that had looked problematic from the ground. The second was burdened with the pack, which contained two sleeping bags, pads, food, and a stove. We found that our rock rack was almost worthless, as the compact granite seldom took gear. We lamented bringing only eight ice screws, which forced us into constructing V-threads for anchors. The good news was that these would facilitate our descent.

Endless WI4-5 brought us to a lower-angle, ice-covered hourglass. As I led toward the funnel, we heard the cutting scream of a falling rock. It bounced to my left and hurtled into the void, missing Scotty by several feet. Despite the early hour, it was time to seek shelter. However, there wasn’t a ledge for a thousand feet in either direction. A crappy three-foot-long snow mushroom and a sloping butt-width rock served for our semi-hanging bivy. After much work on the anchor, we improvised hammocks out of the rope and our sleeping pads. The “Shiitake Mushroom Bivy” (named for the shitty snow mushroom) made up in relative safety for what it lacked in comfort. As the evening sun hit the upper face, rockfall echoed in the gash until sunset. Without a place to set it, the stove was worthless. We ate a few bars and relished our last swigs of water before enduring the long night.

My restless thoughts were haunted by memories of Seth. The view painted our experience together. The Ice Pyramid was ghostly in the moonlight. The Angel’s south ridge, which Seth and I had tried in 2010, snaked skyward in distant profile. I shivered not only from the cold but also from the reality that Seth and I would never complete our envisioned masterpiece route on the Golgotha. At one point I awoke from a dream and briefly thought Scotty was Seth.

In the morning we left most of our gear at the hanging bivy. Several steepening pitches led to the routes crux pitch, a 165-foot, dead-vertical curtain of impenetrable gray ice. With only five ice screws for the pitch, I faced numerous 30-40-foot run outs before reaching a spot to belay with two screws remaining. Toward the top of the face, we basked in the sun. More steep pitches gave way to lower- angle ice and the wind-sculpted summit. We simulclimbed 400 feet of unprotected 60-degree snow.

On the narrow summit I felt like King Mausolus riding proud in his chariot. I looked out over the western Alaska lowlands like a ruler beholding his empire. My elation, though, was somewhat dulled by the empty feeling left by Seth’s absence. Yet in a way he was with me. Under the purple sky of a full moon, I cast Seth’s ashes from the summit. The mountain became his mausoleum. It will be a remarkable place to spend eternity.

After a quick brew, we descended through the night. Neither of us had consumed a sip of water in over 24 hours. It took us nine hours to rappel 2,200 feet. I began hallucinating, then fighting for consciousness. At one point I shone my headlamp toward a blank wall and gazed at infinite green pastures filled with cows. We had been on the go for almost 48 hours. I fell asleep hanging from anchors as Scotty rigged the lower rappels. We reached a large natural snow cave at 7 a.m. and slept for almost 10 hours. When our food was gone, we packed up and carefully downclimbed to the glacier. Only 400 feet above the bergschrund, I discovered a Corn Nut in the snow. I had eaten a pack of Corn Nuts on Mausolus’s summit, and this kernel had fallen 4,000 feet down our line of ascent.

After several days of excessive eating and coffee drinking, we skied the Swift Glacier north over the pass that had blocked access to Mausolus several years earlier. We continued down the Big River Glacier, past the Ice Pyramid and Exodus. Each mountain brought memories of Seth. After 18 miles Scotty and I camped under Mt. Hesperus’s Matterhorn-like northwest face. The next day we skied the remaining 17 miles to Rob Jones’ lodge on the Big River.

To this day I feel a profound sense of pride in knowing that Seth, too, would be proud. In his honor we named our route the Mausoleum.

Clint Helander, 27, lives in Anchorage. After graduating from the University of Alaska, he works seasonally to fund his climbing life. In 2011 he also climbed Mt. Hunter, drove 17,000 miles on a four-month climbing trip, and endured a month of bad weather in Patagonia. In March 2012 he went to his beloved Revelations for a fifth time, with great success.

Clint thanks the Mugs Stump Award, the AAC McNeill- Nott Award, the AAC Mountain Fellowship Award, and the Mazamas Alpine Adventure Award for making possible his trips to the Revelations.