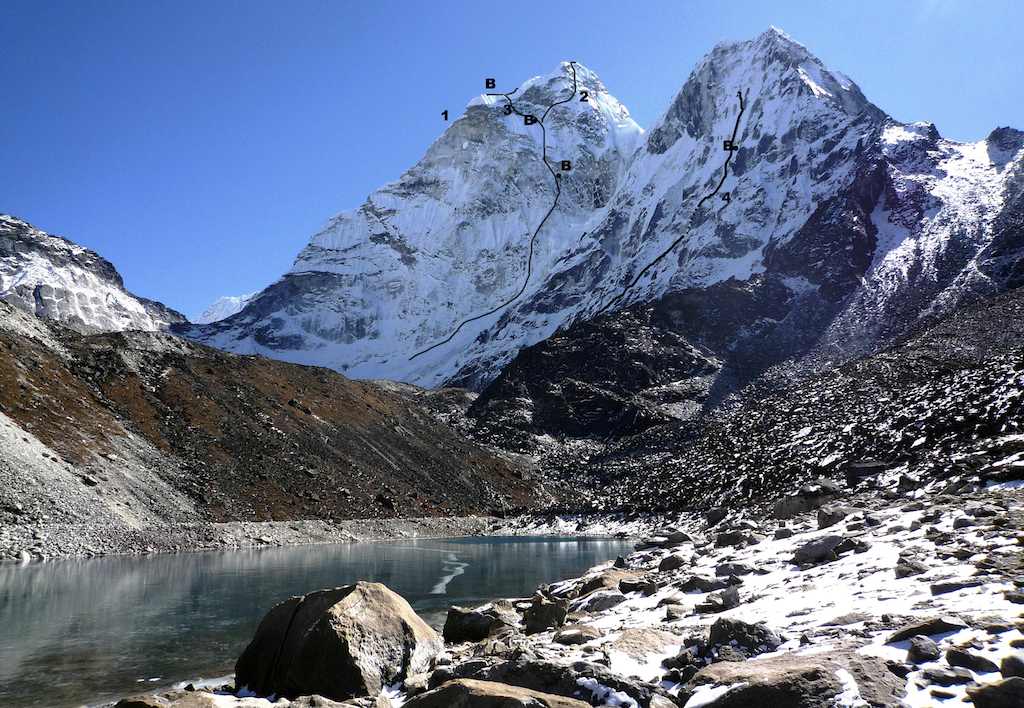 In early November, David Goettler (German) and Kazuya Hiraide (Japanese), both experienced and talented climbers, found themselves in a very tight spot when they attempted to ascend Ama Dablam by their own variation of an unusual route up the northwest face to the north ridge. They climbed alpine style with a minimal amount of gear.

[Editor's note: Goettler and Hiraide more or less followed the line of the Stane Belak-Srauf Memorial Route (Furlan-Humar, 1996) on the northwest face, making bivouacs at 5,877m and a reported 6,358m. Above their second bivouac, where the original route breaks right and climbs directly to the summit, the pair slanted up left to the crest of the north ridge.]

On the 6th they gained the north ridge at ca 6,450m and then continued up the crest for 50m, until at 10:15 a.m. a snow avalanche hit them and carried them down 10m. Snow conditions on the ridge made it impossible to go higher. Snow on the east face was very unstable; on the north face it was like sugar.

They started down the north ridge, but at ca 6,350m encountered cornices and seracs. It seemed impossible to descend any farther, and they did not have the equipment to rappel the face. They could neither retreat nor advance. “We were trapped,” said Goettler.

They bivouacked at a small col on the ridge and phoned their Kathmandu agent, asking him to send a helicopter. That night they became concerned that a chopper might not be able to reach them, because a strong wind was blowing from the west. Luckily, however, the wind dropped the next morning. Above and below their bivouac were high seracs, and Hiraide fixed a rope to the top of the lower serac using a snow stake. The pair decided that Goettler would be taken off first, and all the gear, including tent, food, fuel, the two ropes, medical kit, and phone, would be left with Hiraide.

At 9 a.m. a helicopter approached from the east in a light breeze, and circled around them before touching down on top of the lower serac. Goettler was airlifted to the nearby village of Chukkung.

Hiraide now waited atop the serac for his turn. Soon the helicopter reappeared from the east and tried to hover ca 30cm above him. Instinct told Hiraide it was dangerous to attempt to get on board, and as he hesitated, the helicopter slid slowly onto the northeast face “with a bang and a roar.” Black smoke billowed out, and there was a strong smell of oil. (Hiraide did not actually see the chopper's rotor touch the serac because he was crouching in the snow.) The crew, pilot Sabin Basnet and engineer Purna Awale, were killed.

Hiraide now re-pitched the tent and waited. On the following morning he was successfully plucked off the mountain. At 7 a.m. he heard another helicopter’s engine, and as it approached, he gestured to the pilot that the top of the serac was a danger to the rotor; the pilot flew several circles to check conditions, and informed Hiraide that he could not pick him up from that point. The pilot signaled to Hiraide that he should try to descend 50m to a flatter spot. Hiraide did this using one of the ropes, and at 7:15 was evacuated, with all the gear, to Lukla.