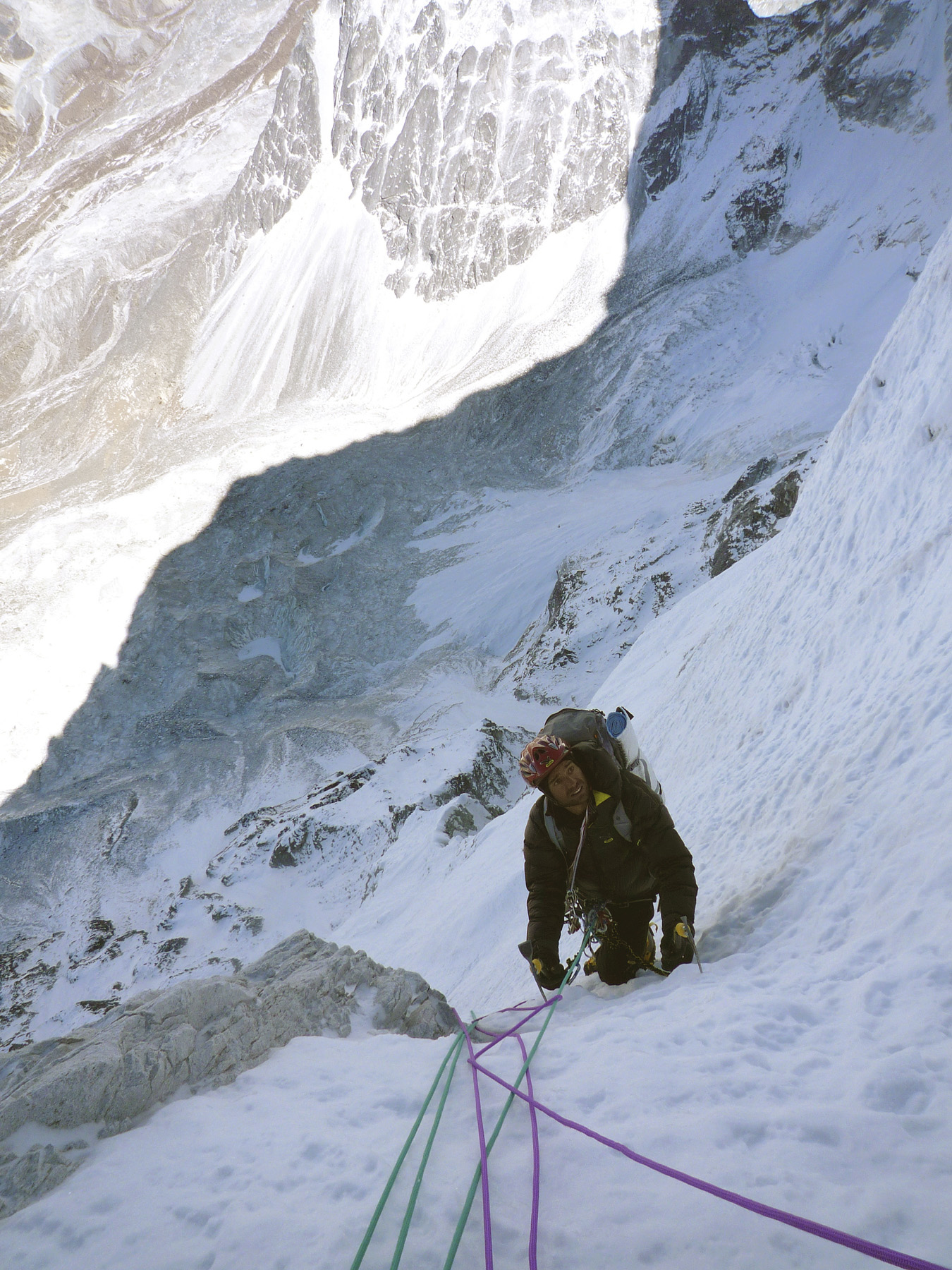 While walking back from Island Peak I saw what I thought was a series of ice runnels on the northern flank of Tsuro Ri, the shoulder on the northwest ridge of Ama Dablam, and decided I had to try them. I believe every mountaineer has demons that try to stop him pursuing his or her dreams, and I had to fight against my own before starting up this virgin face of Tsuro Ri. Andrea di Donata and I attempted a line right in the middle of the face. The route was midway between the righthand ridge (climbed in 2001 by Cartwright and Cross as the opening part of their complete ascent of Ama Dablam’s northwest ridge), and the Japanese route on the northwest face. We took food for five days, a gaz stove, and three canisters. Earlier on the trip I'd lost a rucksack containing my bivouac sack, so a lodge keeper gave me a blue plastic bag that I could slip inside of.

The alarm woke us at 2 a.m. It took four hours to reach the lower slopes, which were ca 400m high and 45-50°. The snow was often knee-deep, and only when the angle steepened to 60° did we start using front points. On the first few pitches, which I led, axes bounced against the rock beneath, crampons scratched the face. Ice screws went in only a few centimeters. I climbed for more than 50m—more than the length of our rope—without placing any real protection. Andrea understood, unclipping from the belay and moving up. Normally, the second would climb with the heavier sack, but this situation was different, and we had to share the same fate.

The game of balance lasted almost 250m, blunting our axes while we overcame ice sheets up to 85°. We reached the steepest part of the face and dug into the snow slope below it, excavating a snow cave for our first bivouac.

The alarm rang at 6 a.m., but we didn’t need it; Vasco Rossi, AC/DC, Dire Straits, Heroes del Silencio, they had all been roaring in our ears to quell the shivering due to cold. We moved up, and from time to time succeeded in placing a piton, which allowed us to feel a little more comfortable. We had hoped for a snow ramp leading through the upper wall to the summit ridge, but reality shattered our hopes. When I watched Andrea fight for an hour on a traverse where ice gave way to powder snow, I understood that things were clearly going wrong. At the foot of the face we expected good ice and found only a thin layer of snow. Why had we expected it to be better higher up? Above lay a vertical rock wall covered with powder. Andrea reversed delicately, took out a couple of Friends and gasped, “Dan, careful, hold me.” He slowly returned to the belay, and at 5 p.m. we rappelled to our previous bivouac. The next morning we continued to rappel the route.

If I had completed this line I would have called it Human Rights 1945. The United Nations was created in 1945, and I thought it might be good that every time someone looked at the line they would think of human rights. The first right is “all are free and equal.”