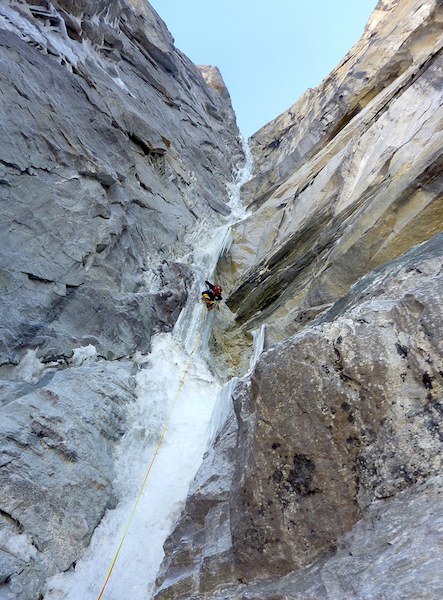 On October 29, Jared Vilhauer and I started up what we believe to be a previously unclimbed ice line on the southwest face of Lobuje East. We'd spotted it while making day hikes toward the Cho La (pass). Ice in the back of a prominent weakness caught our attention.

We woke at midnight and were soon ascending a moraine that gave out onto scree-covered ice, which we climbed to gain recently revealed, glacier-polished bedrock. Jared drew the first pitch, which earned the nickname “sparky.” After pounding in a Lost Arrow and a stopper, he locked off on a left tool torqued in a crack, and reached high with the right. The right tool raked and bounced off a ledge covered in a veneer of ice and loose rocks; at the same time his feet skated off the polish and showered me with sparks. This was the first M7 pitch and a great warm-up.

Above, glacial slopes rose at 50-60°. We climbed simultaneously up runnels, running out of ice screws on three occasions and having to set belays. Making a rightward rising traverse, we covered ca 300m before arriving at the base of the weakness. I took the mixed entry pitch, which was characterized by great stemming on relatively good granite with sufficient protection. The next pitch was steep WI5+ with a chandelier of stalactites. It was delicate; Jared avoided placing screws in the hollow curtain.

A few steps of moderate ice gave way to steep mixed climbing on marginal rock. In order to protect the M5 crux, I had to use tied-off stubby ice screws and a Camalot 4. Above, a nine-meter-wide snow couloir gave a good opportunity to stop for a second brew. We made two liters of water and a liter of soup while watching the sun set. We were now about six hours behind schedule.

Jared continued on snow and AI3; I followed when the rope came tight. We dead-ended just below the ridge and traversed three short pitches to the right. It turned midnight while Jared was leading 65m of AI4 in runnels on the upper west face; we had already begun nodding off at belays. When Jared handed over the lead two hours later, we both thought it was no more than 40m to the ridge. I climbed 20m of AI4 before entering a 20m horizontal tunnel under a cornice. At the end I dug a snow bollard and draped the ropes over it before climbing onto the ridge. The crest rose as far as I could see; the snow was like sand inside an hourglass, only lighter. After 2½ hours I reached a flat spot on the ridge and dug a hole. I sat on my pack and put Jared on a hip belay. This was the first flat spot since leaving our high camp 27 hours earlier. From here it was a short distance over similar snow to the true summit. It was 4:30 a.m. and pitch black as we snapped one photo before simul-climbing along the ridge and down the normal route. We named the line Night Terror (VI AI4 M7 WI5+ 85°).