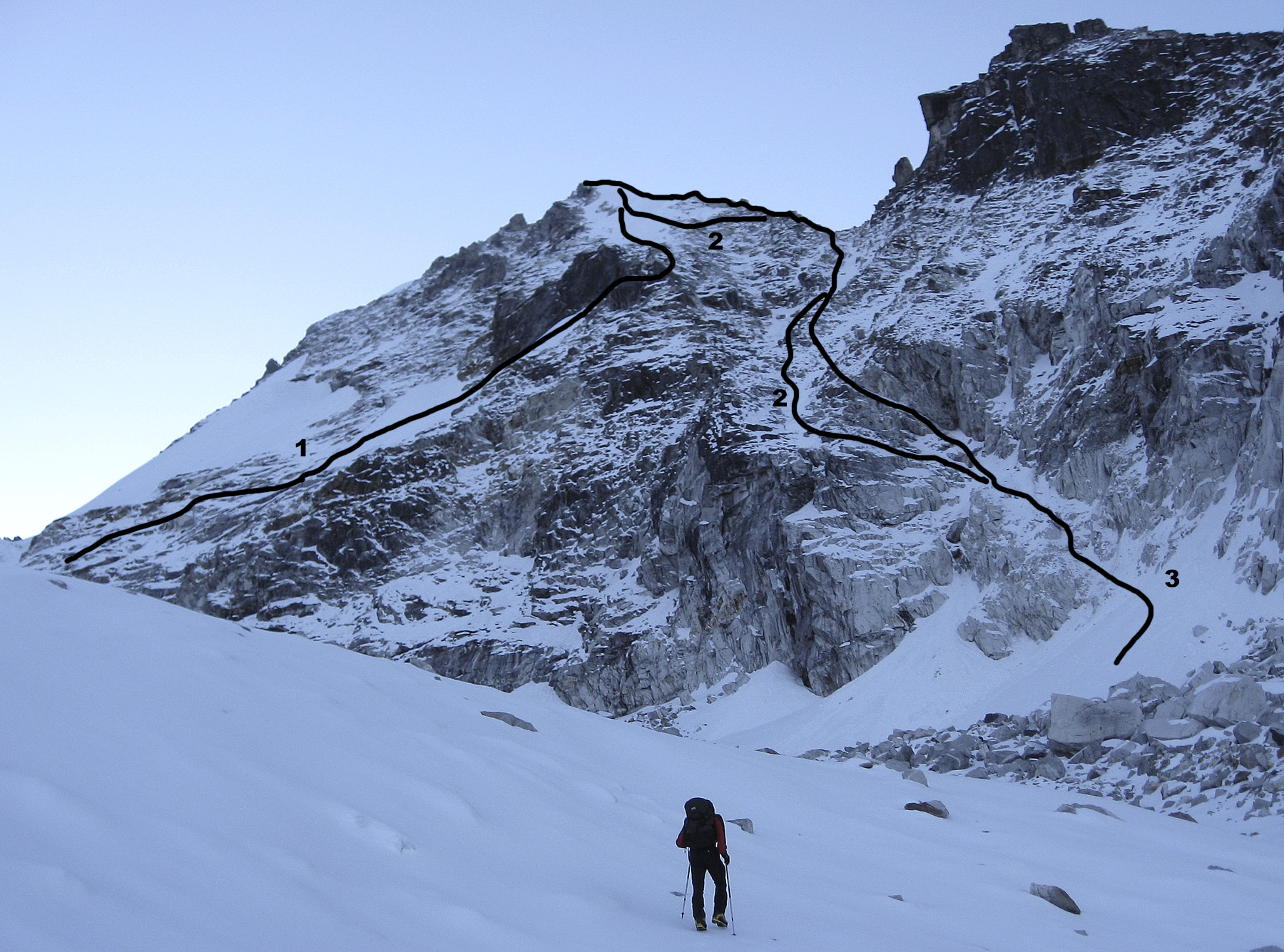 We first identified an obvious line on the west face of Lama Lamani, going up to a col south of the final elegant snow arête of the north summit. We left gear in the boulders below the face, and on the 11th all except Isherwood and Ritchie, neither of whom had yet acclimatized, retrieved the gear and at 6 a.m. began climbing the face in excellent weather. Our route started below and to the right of left-trending ramps leading into a snow couloir that runs up to the col. Steve and Bob followed the highest narrow ramp tucked up against a steep rock wall, while Geoff and I traversed to a ramp below. We all then followed a blocky ridge to the right of the couloir. In the upper part we moved into the couloir and climbed out left to reach the col. To this point the difficulty had largely been Scottish II, and Steve and Bob soloed all but one pitch, while Geoff and I moved together placing runners.

At the col an impressive rock tower to the south lent a dramatic air to our perch, and we could look across at the main (south) summit, connected to the north summit by a pinnacled rock ridge. Above the col we all started up an interesting mixed ridge at about Scottish grade III, but after 100m Geoff and I decided it would be easier to traverse left and join the lower part of the final snow arête. Steve and Bob continued on the ridge to where it joined the snow arête at a level section. Overall, the 600m route was AD+. 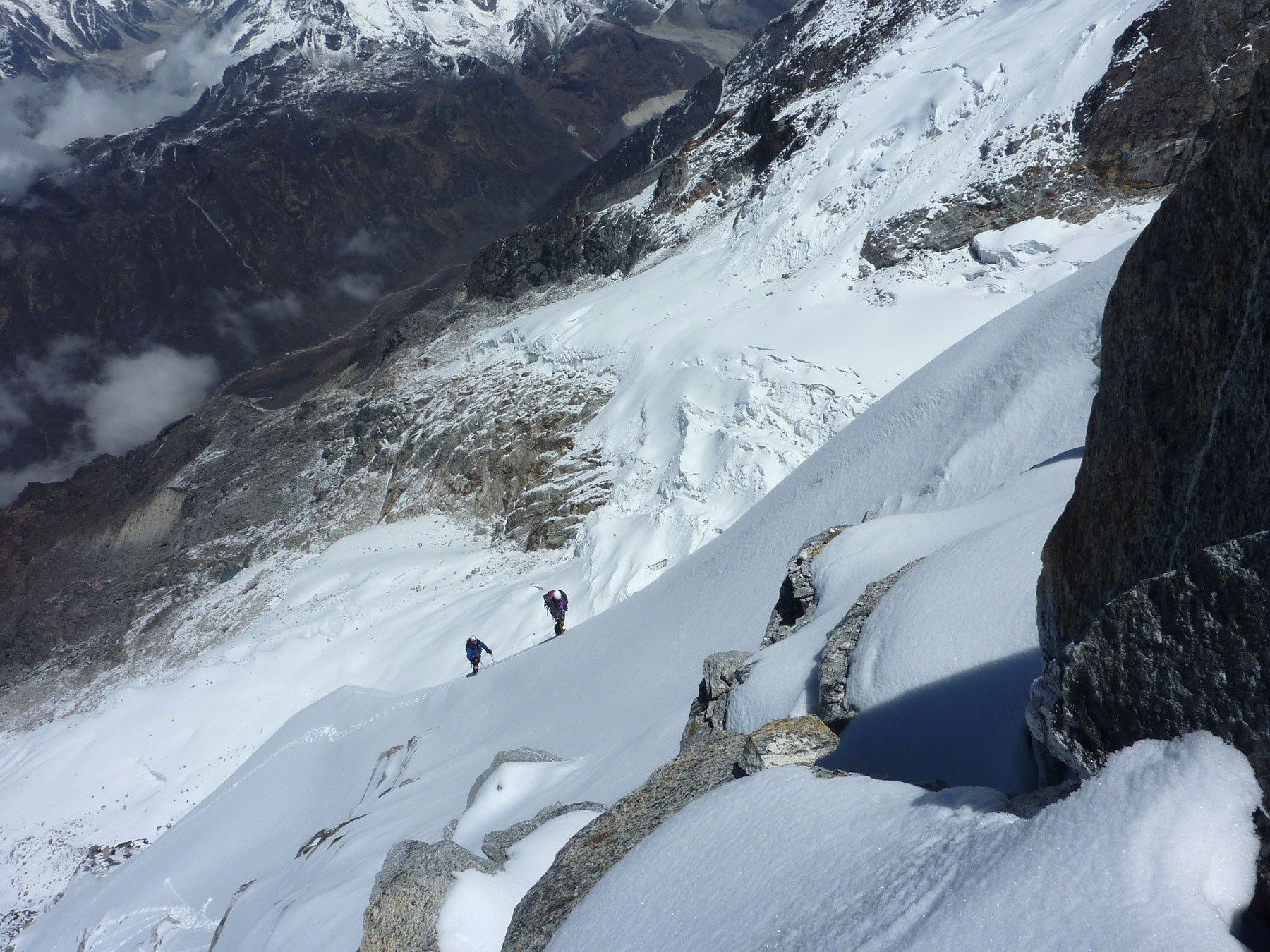 It was noon when we all reached the summit. Afternoon cloud had already built, and we did not get a clear view to the east. We did see the impressive Peak 5,833m (sometimes mistaken for Narsing) and caught a tiny glimpse of the top of the east face of Jopuno, which seemed extremely steep. Although its unclimbed south ridge appears feasible, there seemed to be technical and time-consuming sections, and the top section, where the rock is black and reportedly less sound, is pinnacled and looks rather tricky.

We descended toward Jopuno a short way and then began rappelling the northwest face. After 120m we downclimbed on snow for 150m, then moved northeast and rappelled again. More downclimbing on softening snow got us to the last steep section, which we rappelled to the glacier. [Editors note: The north summit was first reached in 2005 via the northwest face to the west spur, at AD+, by Julie-Ann Clyma and Roger Payne with two friends from the Sikkim Amateur Mountaineering Association, Kunzang Bhutia and Sagar Rai. The south summit is believed to be unclimbed].

On the 14th Bob and Dave climbed an unnamed 5,500m peak between Jopuno and Lama Lamani. They traversed steep snow and ice for a couple of ropelengths to reach a snow arête on the south face, followed it for a pitch, and then climbed two short pitches up mixed grooves to the summit block, which they gained by exposed moves.

At 2:45 a.m. on the 18th, Steve, Bob, Geoff, and I left camp to repeat the west ridge of Jopuno. Above 5,450m the ridge became icy, and after two time-consuming pitches we got established on the firm brown rock mentioned by the American party that first climbed this ridge in 2008 (AAJ 2009). The section above was well covered in snow and, although broken, gave climbing of about Scottish III. At 11 a.m. Steve and Bob reached the foot of the looser black rock that forms the summit of the mountain; Geoff and I were a pitch behind. We had been climbing slowly, and it now appeared unlikely that we could reach the summit and descend safely before evening, so we turned around. We reversed the route by downclimbing and rappelling, regaining the tents at 5:30 p.m. Although disappointed not to have reached the top, we agreed that it had been 15 hours of very good alpine climbing in a splendid mountain setting.

Together with Tingchenkang (6,010m), Lama Lamani and Jopuno have been designated Alpine Peaks by Sikkim authorities, and it is easy to arrange permits. All three offer good, medium- grade alpine ascents and could become classics of the Eastern Himalaya. The expedition used Roger Payne’s recommended agent, Barap Bhutia Namgyal, who proved invaluable, and we thank the Mount Everest Foundation and the Mountaineering Council of Scotland for their generous support.