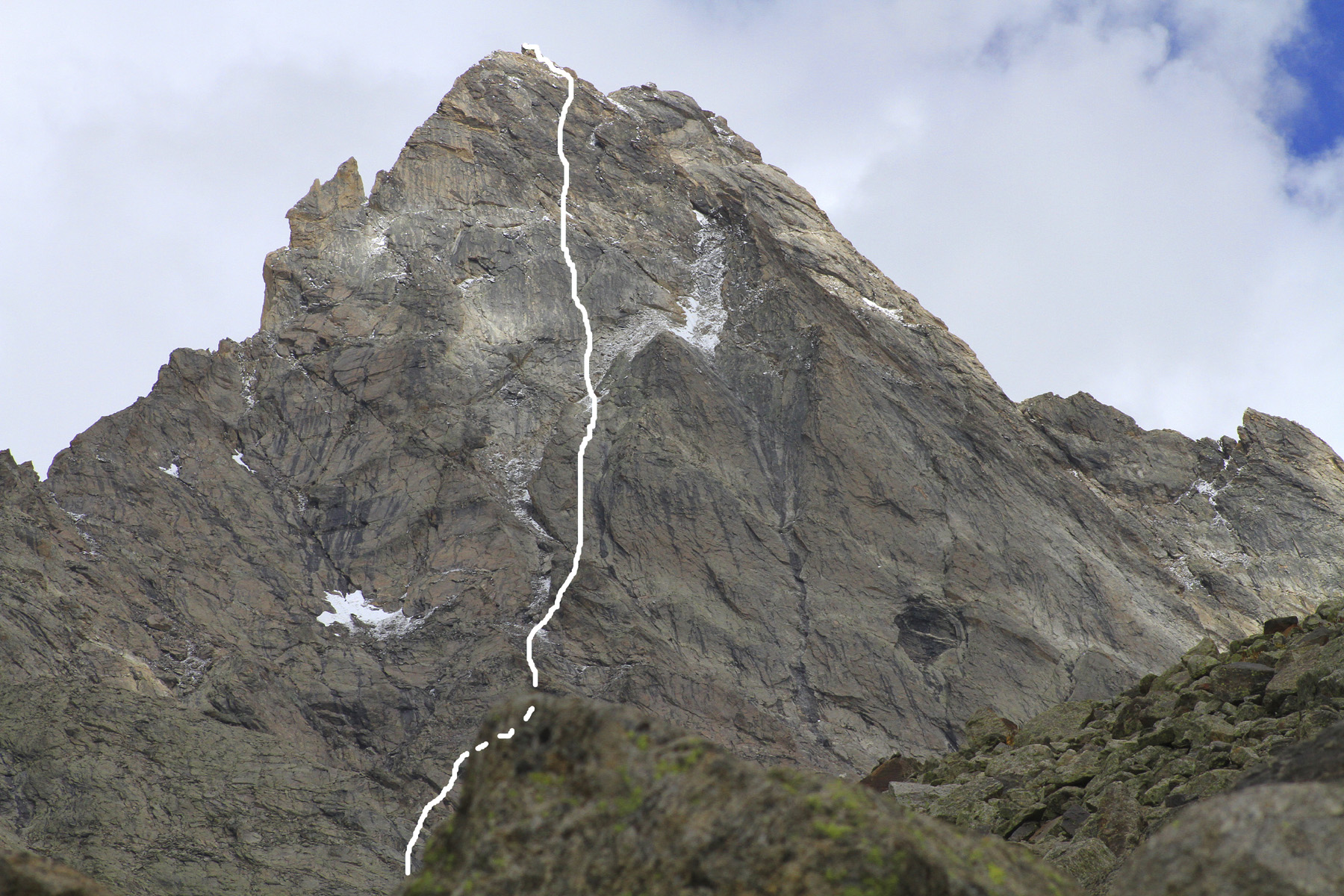 Miyar Valley, Dome Peak (5,650m), Lopez-Pfaff Direct; Point JAMES (4,965m), Southeast Ridge. At the end of August, after a three-day trek, Anna Pfaff and I established base camp in the Miyar, at the spot we had used for our 2008 visit, the grassy meadow below Castle Peak. Taking advantage of an eight-day weather window we had enjoyed during the approach, we set off on September 1 for the southeast face of unnamed Peak 5,650m on the north side of the Chhudong Valley [immediately southwest of Veneto Peak and northeast of Premsingh Peak], Accessing the face via steep talus and a dry gully proved the most dangerous part of the climb. Apart from a few loose sections, the climbing above was good and generally 5.8-5.9 until we reached three-quarters height, where we could either continue direct to the headwall or traverse right to a gully. We opted for the headwall. I led a steep 5.10 face, then Anna led two pitches of 5.10+, overcoming a loose section, before I continued up moderate 5.8 terrain to the summit, arriving in twilight. We slung the most prominent section of the summit with our cordalette, and then began the first of 14 rappels through the night. Along the way we lost one of our ropes, ran out of slings, and almost lost our bivouac gear, but eventually made it down in one piece. We named the route Lopez-Pfaff Direct (IV 5.10+, 800m), and the previously virgin summit, Dome Peak.

The weather then turned bad for 10 days, forcing us to play the waiting game. Carrying no communication technology, we could only assess the weather by looking at cloud and wind movement. However, it wasn’t difficult to figure out that winter had arrived. With that in mind, we decided to retrieve our gear cache left on the Chhudong moraine. 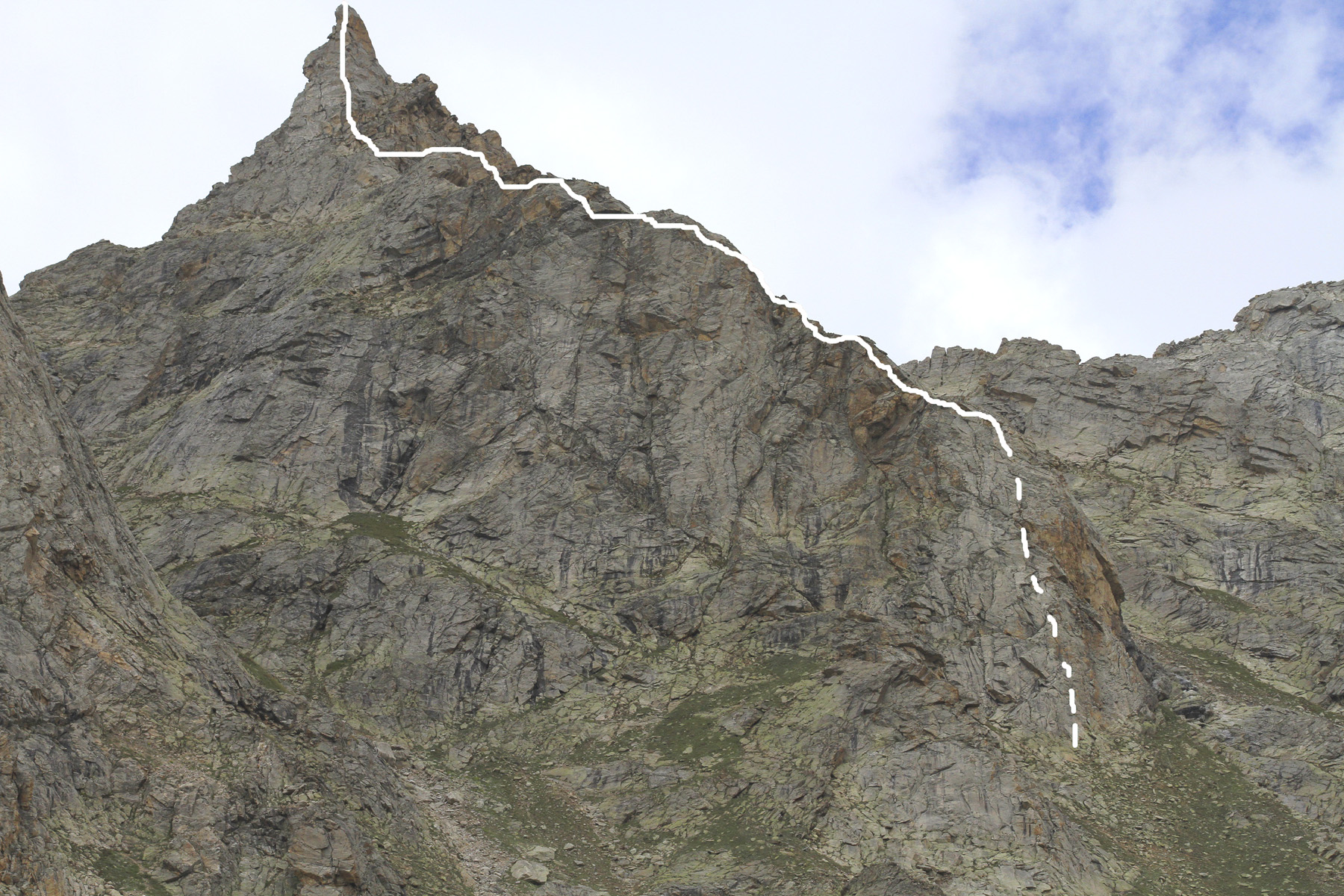 When we reached our gear, the weather began to improve, and we wondered whether we might snatch another route over the next couple of days. We stopped for the night, opting to try a fast ascent next day. The fine pyramid of Point JAMES was close at hand, and we thought the southeast ridge was unclimbed.

Next morning we awoke to a rainstorm. Fortunately, our tent was watertight, so we decided to stay another night, just in case. On the morning of the 11th we woke to perfect blue skies. Simul-climbing moderate terrain on an exciting ridge, we reached a point where it ended below a headwall. On a good ledge we changed into rock shoes and contemplated the weather. We were close to the top, so decided to go for it. I led a full 70m pitch up a 5.10 finger crack through exposed, solid rock, and then Anna took over the lead and reached a roof, which she bypassed by a rightward traverse that proved to be the crux of the entire route. I followed, to find her on a hanging belay just a couple of meters below the summit. To reach the top involved crossing an exposed overhang with no protection. My lead was only a few minutes but felt like hours. Soon we were both hugging each other on the very top, having completed the 600m Southeast Ridge at III 5.10c. There were no other climbers in this region at the time; in fact, we barely saw any trekkers.

Camilo Lopez, Colombia and US