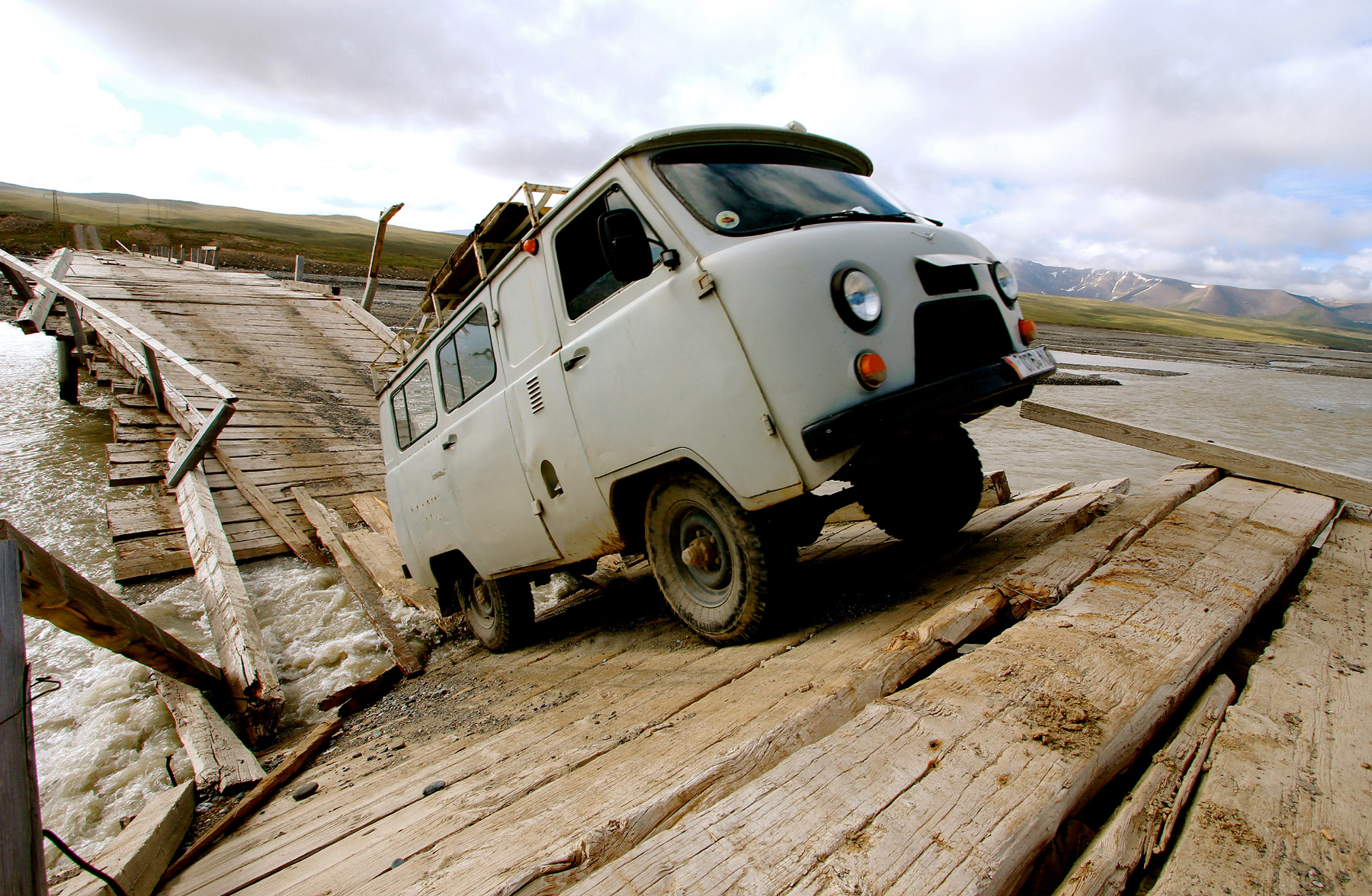 Matt Traver (UK), Chris Parenteau, and I (both American) arrived in Bishkek on July 1. We were accompanied by Jamie Maddison (UK), who was investigating the bouldering potential of the area while reporting on the trip for a UK magazine. We spent two days sorting logistics before spending the weekend working as volunteers for the Alpine Fund, climbing with Kyrghyz children at the sport-climbing venue of Chon-Kurchak. Our last member, Dan Clark (UK), arrived on the 5th, and the following day we left for Djangart on a 6WD truck, accompanied by Abdybek, an Alpine Fund intern who we intended to employ as a translator and expedition cook.

After two days’ travel we reached the military border post of Uch-Koshkon, where Abdybek, lacking photo identification to go with his border permit, was denied passage and had to return to Bishkek.

Due to impassable conditions on the track over the Djangart Pass (4,158m, 41°40.678' N, 78°48.951'E), we were dropped in the Kaichi Valley. On his way home to Bishkek, our driver arranged for local nomads to help us, and over the next two days four horses transported all our equipment over the pass to a base camp alongside the Djangart River, near the outflow of the Akoguz Glacier.

We spent several days on acclimatization and reconnaissance before Clark, Traver, and I (Parenteau was ill and remained in camp) set off for the Djangartynbashi Glacier, one of four glacial valleys that rises south of the main Djangart Valley. It took a day and a half to reach the foot of Pt. 4,766m (41°37' N, 78°51' E), and on the following day, in a snowstorm, we made a 22½-hour round-trip ascent of the peak via the northwest face. We climbed an elegant 700m icy couloir leading directly to the summit, and we named our line Horseman’s Horror (D+ 80°) after discovering that nomads had cut 20m from one of our ropes. We propose calling the summit Pik Howard-Bury, after the British explorer who visited the Tien Shan in the early 20th Century.

After a day’s rest at base, Traver and I set off for the N2 glacier, with Clark and Parenteau heading for the N1. After a perilous ford of the Djangart River, Traver and I made a lengthy approach up the broken glacier to the east face of Pt. 5,080m (41°39' N, 78°59' E). Delayed by morning snow squalls, we began our ascent at mid-day, climbing the southernmost couloir on the face, then following the broad shoulder above to the summit block. As night fell, heavy winds scoured the shoulder, and just meters from the true summit we elected to descend to avoid traversing into the full force of the wind. We have proposed naming the summit Pik Sutherland, after Traver’s great uncle, Robbie L Sutherland, a prominent Orcadean sailor and author, who recently passed away. The route was aptly christened, Will Your Anchor Hold? (700m, TD-), which is also the title of one of his books.

Clark and Parenteau were less fortunate. During their approach, Clark collapsed and suffered serious concussion. Parenteau escorted Clark back to base camp, where a day later Clark collapsed again. Unable to make a medical diagnosis, the team arranged evacuation with the assistance of Global Rescue. Accompanied by Maddison, Clark reached the Kaichi valley and went by vehicle to Bishkek for medical consultation. Back home, Clark has been diagnosed with a heart arrhythmia.

Rain and snow, which were a daily occurrence throughout the expedition, now intensified, but determined to make one more climb, Parenteau, Traver, and I again headed to the Djangartynbashi to attempt Pt. 5,048m (41°35' N, 78°52' E). On July 26, after a full day of post-holing up the glacier, we pitched camp at the base of the mountain. The following day, with Parenteau forced to remain in camp due to wet boots, Traver and I climbed the north ridge and northeast face under sunny skies, one of only a couple such days during the entire expedition. We named the route Postcard for the Chief (650m, AD+) as a tribute to the soldiers, in a nearby military post, who were unable to receive mail. Due to the good weather we propose the name Pik Illumination for the summit.

We left the valley on the 31st, but a washed out bridge forced us to walk to Uch-Koshkon before meeting our truck, assisted in hauling gear and crossing a river by a horse and soldier sent from the post. Unable to carry all our gear, and unable to make a second trip because of the truck’s schedule, we paid the soldiers to make a second trip after our departure for Bishkek and offered them our equipment. We were supported by an AAC Mountain Fellowship, a WL Gore Shipton-Tilman Grant, the Mount Everest Foundation, British Mountaineering Council, Welsh Sports Council, and the Jeremy Willson Charitable Trust.

Considerable additional information about this expedition can be found at its website: kyrgyzstan2010.com.

Editor’s Note: Lying 95km south of Karakol city, the Djangart region was first explored by Russians in 1932, though little documentation is available on their activities. The peaks had to wait over 70 years for their next visit by mountaineers. In 2004 British climbers Ingrid Crossland and Graham Sutton made two unsuccessful attempts on the highest summit, Pik 5,318m.

In 2008 a team from Moscow climbed Pik 5,291m, the first known ascent of any summit in the range. They also climbed two lower peaks from the Kaichi Valley. This leaves the area offering enormous potential for first ascents and new routes, and there is at least one glacier system still completely unexplored. On some granite ridges and shorter walls the rock quality appears high.