Various Peaks Above the Karakol and Arpa Valleys 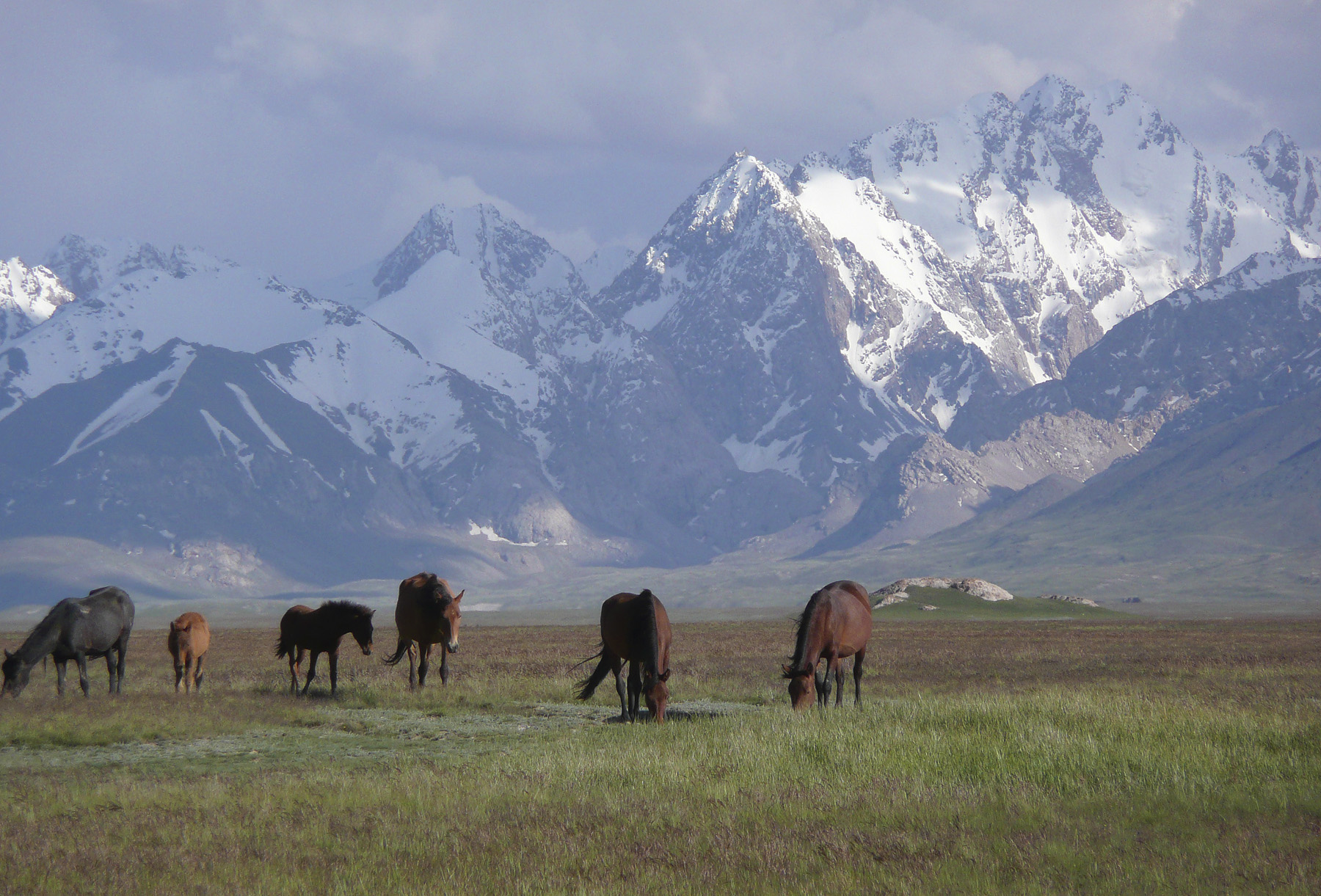 In July I returned to Kyrgyzstan for the third time, my main goal being to explore more of the Torugart-too and in particular to push further along the Fergana range, an extension of the Torugart-too running northwest along the divide between the regions of Osh and Naryn. In this, Misha Sukhorukov, Glenn Wilks, and I were highly successful.

We began by again visiting the Naryn Tal to acclimatize. The wooded valleys make for beautiful camping and the clear streams pleasant fording. We climbed a prominent peak at the head of the Kandi Valley. A steep moraine led to a long snow bowl and onto the flank of the northeast ridge. Crossing below a prominent gendarme, we roped up for a steep, loose step. This was fortunate as Misha took a fall. A direct ascent of the headwall led to the summit of Pik 4,450m (41°21'28" N, 76°28'38" E, all GPS readings). To the west we could see the mountain I climbed in 2008 (AAJ 2009). There was no evidence that any human had been here before, but ibex tracks crossed the summit.

We then moved south to the Torugart-too, driving across trackless country in 4WD. We stopped at the last civilization; a collection of yurts hard up against an impassable Karakol River, but with a way open to the target valleys we had identified in the UK. The resident families were most friendly, and like so many people who have little, they were generous and hospitable.

We first headed southwest and camped just below a glacier at 3,500m, surrounded by unclimbed peaks of 4,400–4,700m. Our ascent of Pik 4,470m (40°37'58" N, 74°31'45" E) took place in full Scottish conditions: wind, rain, snow, and cloud. In a whiteout I drifted over a cornice in the final section, fortunately having just put on the rope. Dropping down from the summit, an intense tingling in the rear warned us of the thunder clap that was shortly to follow.

Our plan was now to head south along the Karakol River and up to the snout of a long glacier marked on the map. The range is relatively deep here, and a score of peaks appeared unclimbed. We camped next to a torrent disgorging the fastest flowing milk chocolate yet discovered, and the following morning, at 5 a.m., Misha and I forded it in our underpants (Glenn was ill). Moving east on a narrowing ridge, we ascended the loosest and steepest scree in my memory. We reached a top of 4,318m (40°36'41" N, 74°34'35" E) but were denied a further summit by my lack of crampons, which had been left at camp. One thousand meters of perfectly padded descent on soft shattered slate had us down in minutes.

Next day, while Glenn headed down to summon the horses, Misha and I traversed another horseshoe ridge culminating in a massive, overhanging cornice on the final summit, which had been visible far down the access valley: Pik 4,378m, 40°34'28" N, 74°37' E. This appears to be just north of the 4,848m peak climbed in 2007 by Dmitry Shapovalov (AAJ 2008).

Deep in the broad basin of the Arpa Valley, the Fergana peaks have a remote and isolated feel, and the Karakol Valley provides access to a pass over the range known to locals. While probably visited by adventurous trekkers, the yurt families had seen only one group of trekkers (French) in 10 summers. There is opportunity to climb an almost unlimited number of peaks with no recorded ascents, although the presence of the Russian military makes it likely that some may have received the attention of enthusiastic Red Army alpinists if they were allowed to escape the clutches of their organized climbing camps, none of which were in this area.