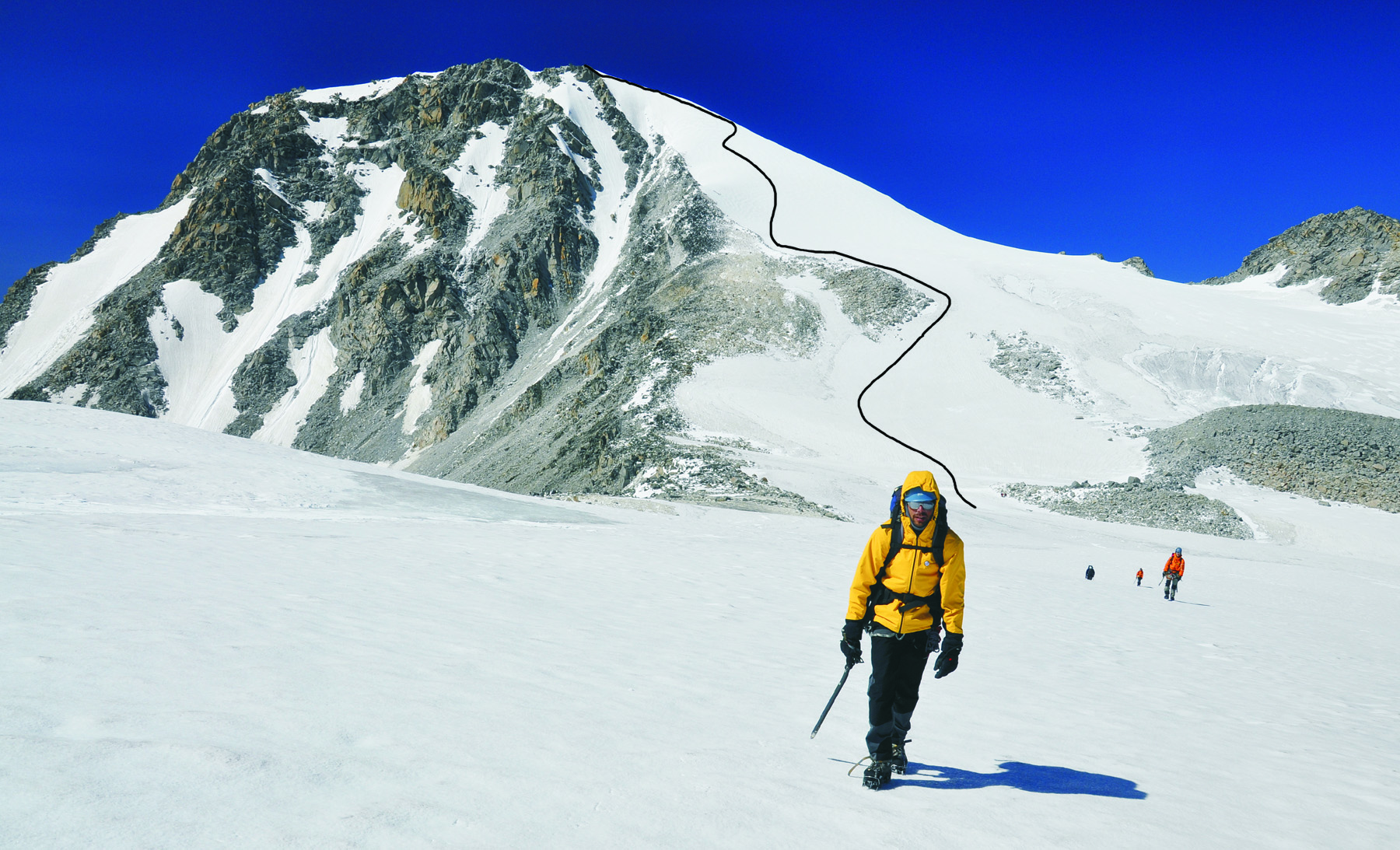 In September our Czech-Slovak expedition visited two areas of the southern Altai. We first traveled to the Taban Bogdo on the border with northwest Mongolia. Immediately north of Huiten, which forms the triple border point of Russia, Mongolia, and China, stands Russian Tent (a.k.a. Russkiy Shator), which had been climbed several times by its frontier ridges (east and southwest) and by easy glaciated slopes on the Mongolian side. Libor Kejr, Tomas Lakpa, and I made the first known ascent of the northeast couloir. This was an icy slope of 45° with several crevasses. One, above a flat section at around mid-height, was rather large.

Forty kilometers west, close to the triple border point of Russia, Kazakhstan, and China, lies the Ak Alakha, south of the Ukok Plateau. Only scientists and military had visited this area prior to our expedition. Due to its proximity to China, the region was closed to the public until 1991. Until recently access to the land within 20km of the border was restricted. Today there is a military base on the Ukok Plateau, and although access within five kilometers of the border is still officially denied, controls are rare and not strict. Unfortunately all peaks lie within three kilometers of the border. The mountains are either snow/ice or composed of very poor rock. There are three main glacier systems on the Russian side: Ukok to the west, Ak Alakha in the center, and Kanas to the east. All were unexplored prior to our visit.

We reached the military base on the Plateau in one day’s drive from Kosh Agach. Beyond the base it was possible to progress a few kilometers with 4WD, but after that we needed to walk about five hours over swampy permafrost to the glaciers. From there it took one day to ascend the eastern side of the Ak Alakha Glacier, climb a 200m section of 60° ice to the China-Russia border, then follow the east ridge of Ak Alakha, the highest peak in the range, to its summit. The first part of the ridge was flat and wide. After this we climbed the east face on 45° snow/ice and the final section of sharp north ridge to the top. The ascent was made by Vladimir Bures, Libor Kejr, Tomas Lapka, Martin Pes, and I (Czech), and Jan Dolezal, Jan Krchnavy, and Viliam Murcek (Slovak). Two days later we returned to Kosh Agach.

The bureaucracy required to visit this region is complex. First you need a Russian visa and an invitation letter, then registration for temporary stay in Russia (only available through a local agent—and don’t forget to cancel it when leaving), then registration with a local rescue team (can be obtained on the spot but is compulsory for border visits), then a border permit (in fact only issued for greater than five kilometers from the border and needs to be applied for at least 60 days in advance), and finally you have to pass through two or three border controls on the Ukok Plateau (be sure to have all your documents in order). This is a nature reserve, and you may find problems with “rangers” asking for a fee. Feel free to contact me for more details.