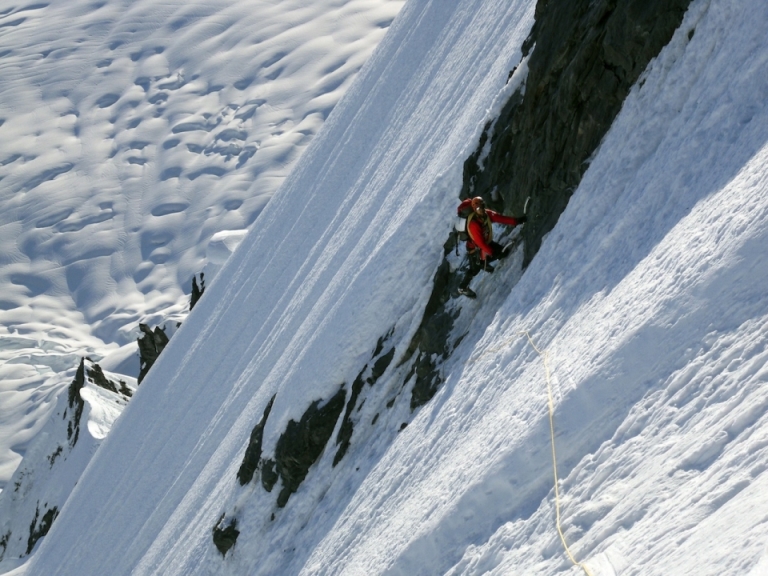 In mid-May we were hanging around Haines Junction, looking for Bill Karman, our helicopter pilot, who was supposed to take us to the Seward Glacier at the base of the Hummingbird Ridge, the main goal of our expedition. We walked into a restaurant, and, to our surprise, a man looked at us and said, “You must be the French guys?” Wed found Bill.

Two days later, thanks to Bill, as well as Andy Williams with his airplane, all seven of us and our gear were at base camp. The south face of Mt. Logan is so massive, it is hard to comprehend its true scale. But 15km away, the north face of Mt. Augusta (4,282m) looked much less daunting. The northeast pillar looked especially attractive, sharp in the evening sun, a natural line drawn by the elements, light, and shadow.

We divided our team into two: Marion Poitevin, Lionel Albrieux, and Jacques Olivier Marie would go for the East Ridge of Logan. The three Sebs (Sebastien Bohin, Sebastien Moati, and Sebastien Ratel) and I would try Augusta by the unclimbed northeast pillar, to acclimatize before attempting the Hummingbird.

On our first attempt, on May 21 at 4 a.m., the temperature was surprisingly warm—around 15°—but we decided to go anyway. After only 150m on the ridge I slipped and was lucky to be stopped by “my” Seb (Moati), who jumped off the other side of the ridge. My knee was twisted from the crampons, so Seb and I returned to base camp, while Sebs Bohin and Ratel stayed. They started up again at midnight, but nothing had changed—still too warm—and when they reached the rocky ridge, they were disappointed to realize that the rock was just like the snow: soft. So after 500m of climbing, they rappelled down, and in the evening we were all at base camp drinking beer and wondering where the fuck we would climb in the following weeks if this damned global warming continues. We spent some days exploring near base camp, but lots of the climbs had serious objective dangers, with huge seracs on top. Every time we returned to camp, the northeast pillar of Augusta was smiling at us, and, in the end, we could no longer resist.

On May 28, we again crossed the Seward Glacier, but adjusted our tactics. We set up our tent at the base of the ridge, just below a big boulder—a good place with a nice view, until a rock hit the tent. After that, Seb (Moati) slept with his helmet on. We started climbing at midnight. It was still warm but our old tracks helped, and in less than three hours we had reached the Sebs’ high point. It was like a race against the sun, and we knew that by 7 a.m. we had to be high enough on the ridge to traverse the north face and stay protected. We climbed in two teams, sharing the same tracks, with a lot of simul-climbing. At 10 a.m., we joined the north ridge at 3,400m, having climbed 1,300m in ten hours. We set up the tent and rested, and at 2 p.m. headed up the 900m-long final snowfield, summiting Mt. Augusta four hours later (Northeast Pillar, 2,300m, TD). The only cloud in the Yukon was with us atop the mountain, hiding the view on the Gulf of Alaska and all the nice beaches wed been dreaming about: Desolation Bay, Disenchantment Bay, Demolition Bay. Then it was back to the tent for sleep, so we could move early, during the day’s coldest hours.

On May 30 we were all back at base camp, our friends having climbed the East Ridge to Mt. Logans east summit (5,929m), and the good weather was still with us. So, we decided that the three Sebs and I would try the “sit start” to the Hummingbird, by the right branch, and Marion, Lionel, and Jacques would try something they'd heard called the “Dragon Tail Ridge” [believed to be unclimbed start to Hubsew Ridge—Ed.].

On the Hummingbird, the pain in my knee forced me to quit early on. The Sebs, however, climbed two days on the ridge, reaching 3,000m with some hard climbing on poor rock before the weather worsened and forced them to retreat. Team Dragon Tail climbed 600m before turning back as well.

Back in France we were already planning our trip back next year, figuring it will be easier now that we know where to find Bill….