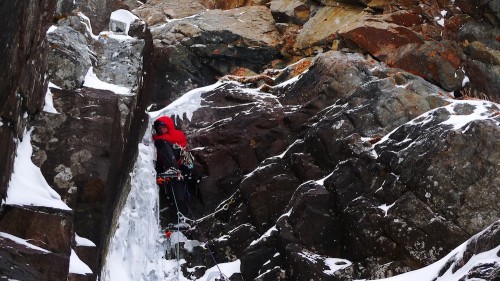 Over three trips in October and November, Aaron Mulkey and I looked for ice and mixed climbs in the Beartooths. We managed a major route each trip, which made the long and remote approaches worthwhile. After speaking with several Beartooth climbers, we think these routes are likely new.

On Spirit Mountain, in Rock Creek Canyon, the Central Chimney (2,200', V WI4 M6R) climbs the large chimney right of Lunar Arête. We found compact rock that did not easily yield protection or belays.

On the Bullet, also in Rock Creek, Daniel Burson, Aaron, and I established Funeral For Another Friend (IV WI4 M6+) an extension to Funeral For a Friend (Jim Kanzler and Jack Tackle, 1978). We broke out of the gully above the second pitch via a rock wall and climbed an additional five pitches of mainly moderate mixed and ice climbing, with a short M6+ crux at the headwall.