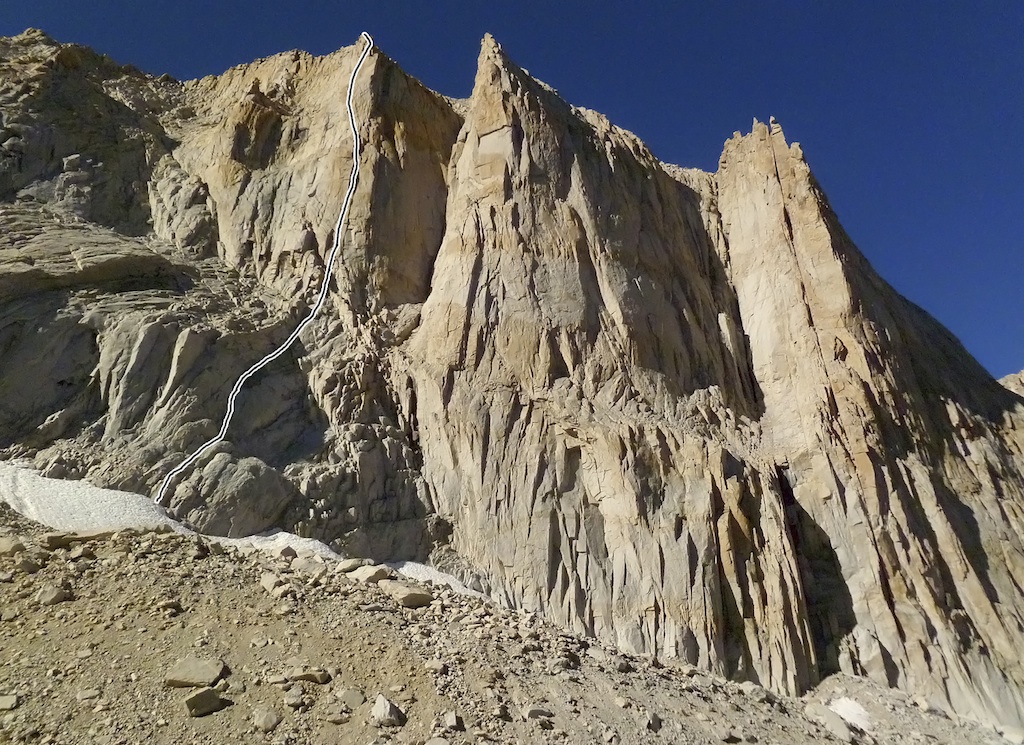 In July, Chris Brown and I set our sights on a large, east-facing dihedral on a broad wall just northeast of the famed Third Pillar of Dana. When viewed from the edge of the Dana Plateau, this “wall” reveals itself as a long and complex ridge reaching east. We approached as per the Third Pillar, descending the rock ridge to its immediate north and then east across talus and scree to the base. A brief 5.9 section past a chockstone led to rambling terrain and a large ledge at the base of another large dihedral, from where we climbed 200' of splitter cracks on the face to the right, gained another big ledge, then climbed another 200' of fun 5.6 on the ridge that forms the left margin of the main dihedral. We moved the belay to a large tree in the main dihedral and traversed a hairy butt crack right, and then back left, to a ledge. That led to a long 5.10- corner, followed by a classic 5.10+ ropestretcher to the ridge crest. We hopped boulders along the ridge back to the Third Pillar approach/descent ridge, and scrambled back to the Plateau. Although it’s unlikely that our route, Butterflies and Rainbows (1,000', IV 5.10+), is the first line on the wall, a search of the AAJ online database returned no other routes. This wall, however, certainly holds potential for many other interesting lines.

In mid-August we met our friends Mike Pennings and Jimmy Haden in Whitney Portal for what Mike described as a four- or five-hour approach to the northeast face of Mt. Chamberlin [The AAJ has misspelled this peak as “Chamberlain” in some previous editions—Ed.]. They started hiking around noon. We opted for burgers and beer at the Whitney Portal Store while waiting for the oppressive sun to drop. We figured we could leave at 4:30 and still make camp by dark.

The prescribed five hours of hiking found us at Consolation Lake, still a few hours below the Sierra crest and several more from Chamberlin. A day-and-a-half after leaving Whitney Portal, we arrived in base camp. “Where you guys been?” they chuckled. They had done a new route—Where’s the Boys (IV 5.11-)—on Chamberlin’s previously unclimbed east buttress. We, on the other hand, had been roundly sandbagged.

Chamberlin’s northeast face comprises three buttresses separated from one another by deep clefts: the leftmost, or eastern, had no known routes; the central buttress had several existing lines [See AAJ 2007, p. 147, although we’ve subsequently learned of additional significant routes on the buttress—Ed.]; the rightmost, or western, is home to Rowell’s North Pillar route and the 2006 route Barracuda (Nettle-Thau).

The next day Chris and I climbed a line, Safety First (1,500', IV 5.10+), on Chamberlin’s western buttress, starting a little right (west) of the North Pillar route. Ours is probably a variation to Barracuda, and trends right for a few easier slabby pitches, then steepens for three pitches of 5.10 before the angle eases again toward the top.

We rested and fished for golden trout the next day, while Mike and Jimmy explored the Hitchcock Lakes basin, one drainage north. The following day we started up a line in the middle of Chamberlin’s central buttress, about 100' west of Fiddler and Harrington’s original Northeast Face route (1980) and below a striking 5.10+ changing corner. From binoculars in camp, all of the features of our intended line appeared to connect, with the exception of one dubious crack. Leading up an amazing 5.10 crack on pitch four, the mystery crack revealed itself: overhanging hands and fingers! We climbed it at 5.11-, grinning the whole way Two more long, excellent pitches in steep, knobby corners brought us to slabbier terrain, then the top. We called our route The Sword in The Stone (V 5.11-) after an oddly shaped block we trundled. In the upper corners we found a fixed nut, left by Jonny Copp and Nils Davis during their 2006 first ascent of I Fink Therefore I Am (AAJ 2007), with which we shared some pitches. A strange coincidence given that friends nicknamed me “Fink” when I was in grade school. My nickname and Jonny’s ability to inspire survive to this day. All of the routes were climbed hammerless, free, and onsight.