On September 23, 2008, Grzegorz Chwola and I flew from Kathmandu to Lhasa intending to reach the Mayer Kangri Massif on the Chang Tang plateau. As far as we could ascertain, these isolated mountains remained unexplored. Although the highest peak (6,266m, N 33°24', E 86°46') is called Mayer Kangri I on contemporary Western maps of Tibet and on Chinese road maps, it is referred to as Bonvalet Peak on Russian maps. Frenchman Gabriel Bon- valet was the first foreign traveler to see the mountain, during his journey through the Chang Tang and the central Arka Tagh in 1889-90, and the name Bonvalet Peak is also used on the map in Sven Hedin’s book Trans-Himalaya (1909).

About 120km to the northwest lies the Zangser Kangri Group, whose highest summit (6,460m) was first climbed in 1990 by a Japanese-Tibetan expedition (AAJ 1991) and repeated in alpine style in 1997 by Frank Kauper and Stefan Simmerer during an unsupported south- north crossing of the Chang Tang (AAJ 1998). Three-hundred km to the east-northeast lies Purog Kangri, named the Dupleix Mountains by Bonvalet, who thought they were around 8,000m in elevation. The official altitude is 6,482 on the Chinese map (6,435m on the Russian): this is a different Purog Kangri to the one climbed by a Canadian-Danish-Swedish party in 2008 (AAJ 2009), which is part of the Zangser Kangri. Immediately southeast of Mayer Kangri, across the Kyarub Tsangpo, stands the Jomo Ri Massif. Four summits are over 6,000m, with the highest, Jomo I, indicated as 6,015m on the Russian map. The Kyarub Tsangpo was encountered by Jules Detreuil de Rhins and Ferdinand Grenard, who out of all the early explorers came closest to Mayer Kangri during their travels in 1893-94.

No Western traveler appears to have visited this region before the famous American biologist George Schaller. He made several journeys to the Chang Tang from 1987 to ‘94. The publicity he gave the region bore fruit, as in 1993 a 300,000 sq km Chang Tang reserve was created. Schaller includes reports of his journeys in his Tibet’s Hidden Wilderness: Wildlife and Nomads of the Chang Tang Reserve (1997), In autumn 2008 Chinese Juntao Jiang made a cycle trip in the Jomo Ri region and posted photos in a Picasa Web album under the name of “Single Singer “(2008 Tibet).

On September 24, with two drivers, a guide, and a cook, we traveled in two Toyota Land Cruisers to Shigatse. From there we first had to reach the village of Nyima. Next day we headed north to the Kiku La (5,120m, N 30°14.941', E 89°18.340') in the Nyanchen Tanglha West but were stopped on the pass by Chinese police, who told us Shainzi District was closed to foreigners. We returned to Lhasa to try another route.

On the 27th we drove north on the Lhasa-Golmud highway to Nakchu and the next day turned west onto the prairie. Passing Baingoin and Serling Tso Lake, we reached Nyima, where we refueled the vehicles. Turning north, on October 1 we crossed a pass (4,900m, N 32°39.974', E 86°31.035'), got our first glimpse of Mayer Kangri, and descended to the last settlement, Rongma. We continued, crossing another pass, and after a night out took one of the Toyotas and went to look for a base camp. We found it close to the southeast flank of the range at 5,057m (N 33°24.776', E 86°48.760') and set up camp the same day. Nighttime temperatures here fell as low as -15°C. After reconnaissance to 5,700m on the hills south of Mayar Kangri, on October 5 we climbed to the east ridge of Mayar Kangri I. I stopped at 5,865m, but Grzegorz continued to the summit of Mayer Kangri I East (6,053m).

On the 6th we drove with nomads on motorbikes to the northern side of the massif, and the next day made a trip towards the Jomo Ri mountains to take more photographs. The day after, we left base camp and retraced our approach as far as Baingoin, where we took a different route back to Lhasa, via the well-known lake of Namtso and Largen La to the Golmud-Lhasa Road. We were back in Kathmandu on the 16th. 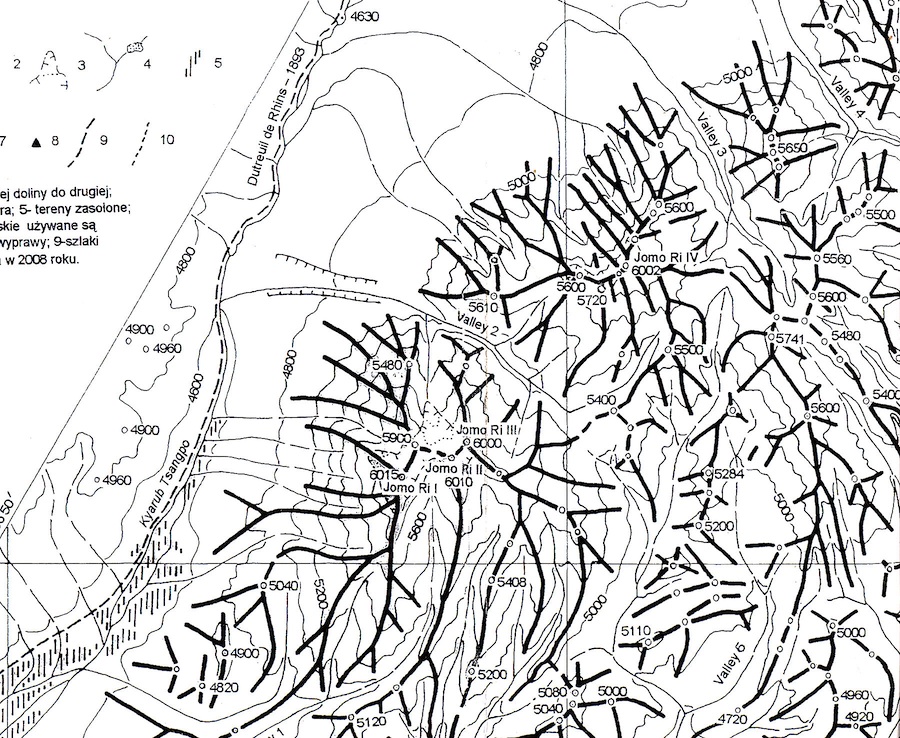 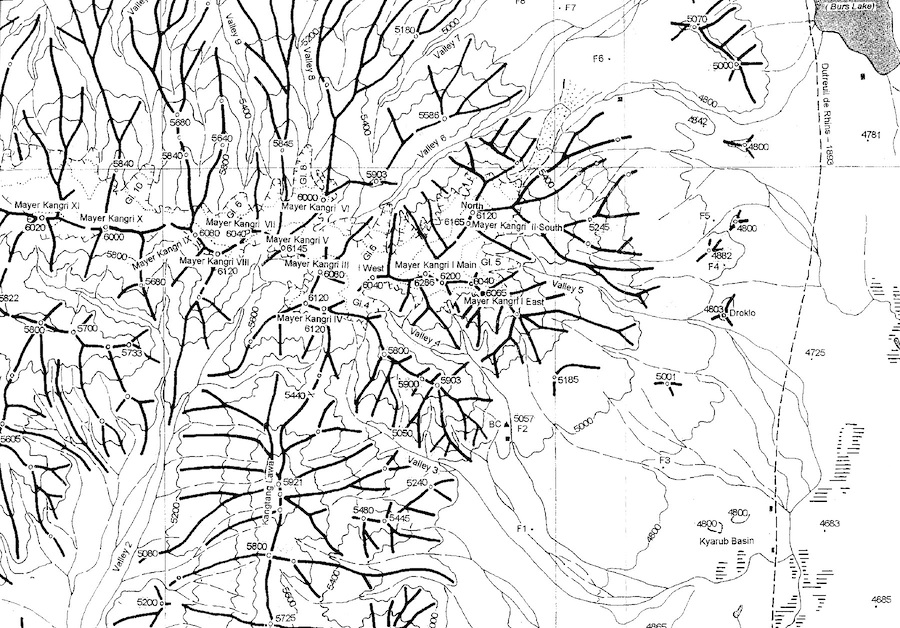