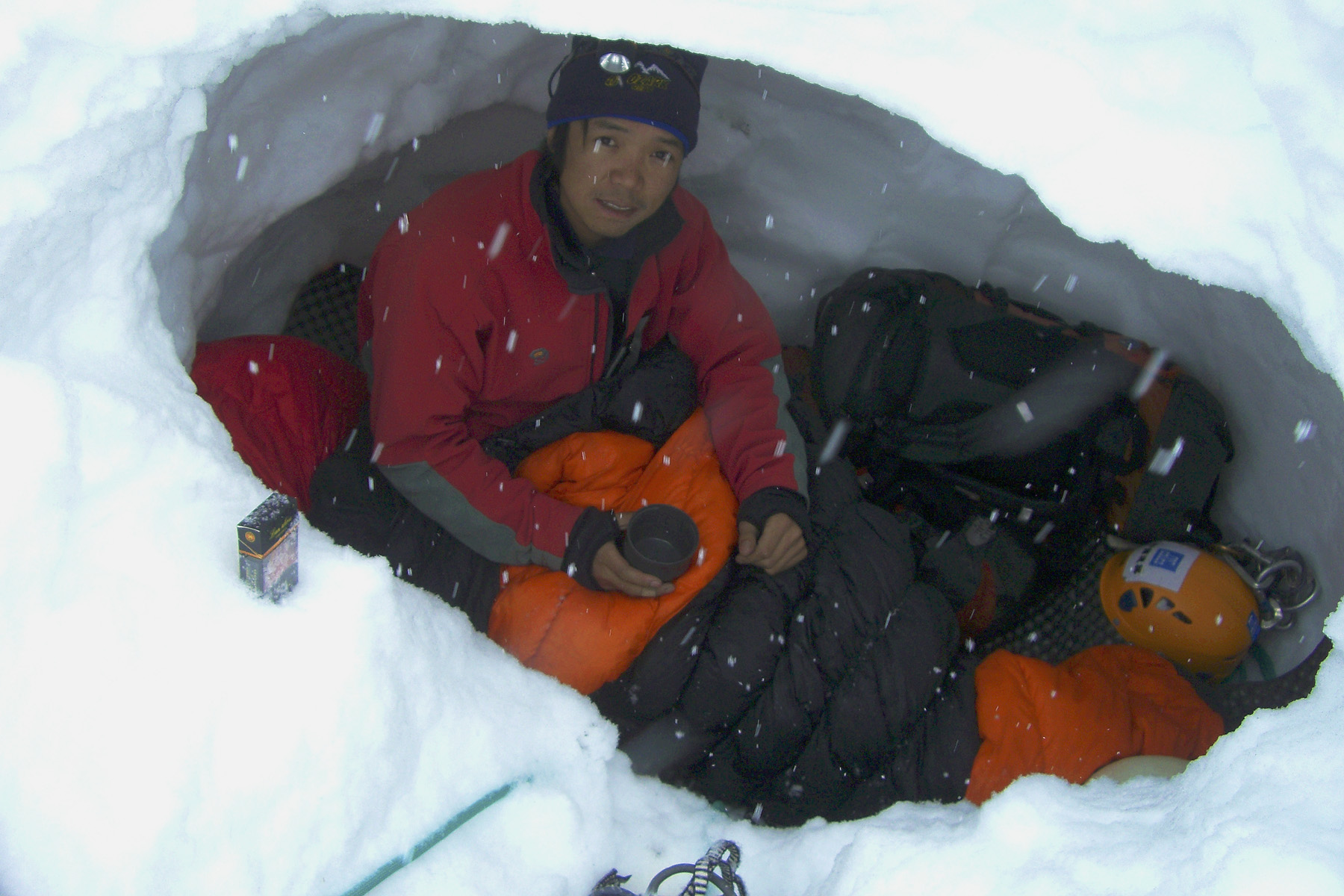 Kangze’gyai (ca 5,800m), west face. Kangze’gyai (a.k.a.Tuanjiefeng), the highest peak in the Qilian Mountains, is located in Tianjun County within the Haixi Autonomous Prefecture of the Qinghai-Tibetan Plateau. From the town of Xining it took Li Yong, Yuan Wei, and I three days to reach base camp northeast of Hala Lake. We arrived on October 4. While Yuan remained to take care of camp, Li and I made the first ascent of Kangze’gyai’s west face and south ridge in a three-day round trip.

We took neither tent nor fuel, carried only two sleeping bags, one liter of water,and a little food. We reached the bottom of the west face on the 5th, a day of fine weather, having climbed an unnamed, crevassed, and seracked glacier. This took longer than expected due to deep snow. By evening, as we approached the bergschrund, the weather was deteriorating, and we dug a snow hole at 5,343m for the night.

Next day the weather was terrible, with strong winds and snow. However, we continued our ascent, climbing directly toward the south ridge. A little below the crest, at 5,756m, we dug a second snow hole. The 7th was relatively clear with no snowfall, but the wind was still strong. At 2 p.m. we reached the summit, where we recorded a GPS height of 5,817m and coordinates N 38°30'22,68", E 97°43'01.98". We descended the unclimbed northwest ridge before cutting back south to the unnamed glacier, reaching base camp at 8 p.m. We named our route Darkness Wall (AI3+).

Kangze’gyai was first climbed in September 1958 by a large Chinese expedition, which approached from the southeast up the Ganalou Glacier. Leader XuJing and two others reached the summit on the 14th: Ten climbers followed on the 15th. In August 1999 a Sino-Japanese expedition repeated this route, believing it to be a first ascent. The 35-member expedition comprised seven Japanese and eight Chinese climbers, plus other camp personnel. The only other ascent in this compact range took place in 2008, when Chinese mountaineers Cao Yizhou, Lv Weibo, Pu Bai-lei and Zhen Hanbo ascended a peak above the north bank of the unnamed glacier west of Kangze’gyai.