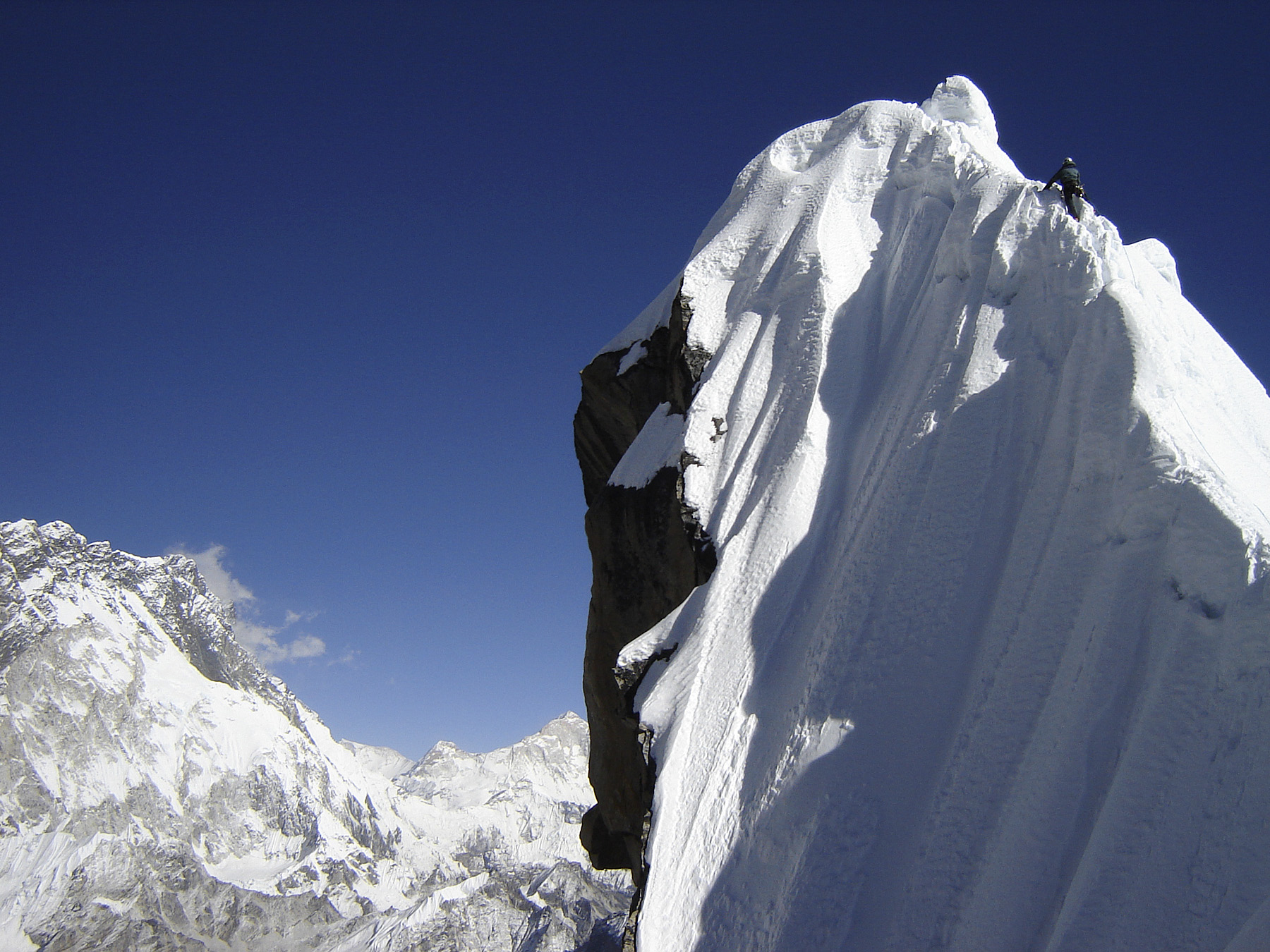 Marcin Michalek, Krzysztof Starek, and I arrived in the Khumbu hoping to climb the north face of Melanphulan, above the Nare Valley. During our first two weeks we acclimatized by trekking from base camp in the village of Pangboche (3,900m) to the foot of the face, where we established an advanced base at 5,100m, and then made two trips to Lobuje East. On the first we reached the so-called False Summit (ca 6,000m, PD). On the second Michalek and I continued on the exposed east ridge to the rarely visited Main Summit (6,119m, D+). This ridge, between the two summits, took 4½ hours and was risky due to dangerous cornices. We then rested five days at base camp before climbing Melanphulans north face in a round trip of five days from advanced base.

On October 30 we moved together up the first 300m of the face and cut a small tent platform on a narrow snow flute toward the right side of the wall. Our idea was to continue from here non-stop. Next day our goal was to climb as far up the 300m crux section as possible. In Polish we refer to the crux as Pralka, which approximately translates to “nasty way.” After three long pitches in the Pralka, we believed we could climb the rest of the route in a continuous push, which was just as well because there appeared to be no possible bivouac site on the hard and uniformly steep ice above. By late the following evening we reached the Pralka and climbed through it during the moonlit night. Next day we climbed many pitches of fluted ice toward the summit cone. We got dehydrated and began to develop frostbite. On most 55–60m pitches we were able to use three or four ice-screw runners, with main belays on ice screws and Abalakovs, placing the latter for our rappel descent and marking them with ribbon. However, because the ice was thin, there were some pitches where we could only place one or two screws, making the climbing psychologically demanding.

We reached the steep wall below the summit at dark. A pitch of 85°, followed by two easier ropelengths, led to the cornice. It was our fourth day on the face, we’d been climbing for 32 hours above camp, and it was 11 p.m. The leader could find no safe stance or belay, so he stopped just below the crest. We were 100m from the summit, but the intervening crest, festooned with highly delicate, often transparent cornices, seemed just too dangerous. We faced a dilemma: trying to reach the top would likely prove fatal, yet we were most unhappy about not continuing. Ke garne, as the Nepalis say (What to do?). We descended.

During the ascent the third man had constructed Abalakovs at each stance, so our descent was efficient, and we were back at camp in seven hours. We rested and then returned to advanced base the same day, November 3.

Prolonged sitting in harnesses while belaying, the low temperature, generally between -15 and -20°C, and wind at night meant that we all suffered frostbite in the toes. The height of the face is 1,400m and above our camp we climbed 18 55–60m pitches. We estimate the grade to be ED2/3 AI 4/5 85°. Our expedition was supported by grants from the Polish Alpine Association (www.pza.org.pl) and the Andrezj Zawada Award (www.fundacjakukuczki.pl).