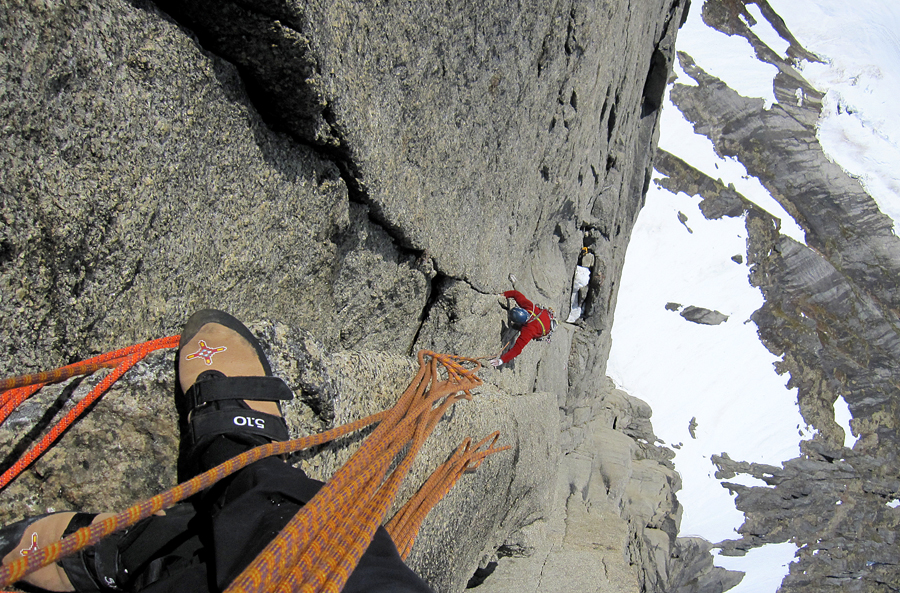 On June 28, Oskar Alexandersson and I made the first free ascent of Life Is Beautiful (VI 5.9 A2+, 600m, Suzuki-Yamaoka, 2000) at 5.13-or F7c+. Both of us led and followed free in a 19-hour push. I had tried to free climb the route the previous summer with Martin Jakobsson, and knew it was possible. That year the weather wasn’t on our side, so we had to leave without getting a shot at a free ascent. This year we climbed the route ground up on our second attempt. We climbed the route ledge to ledge, therefore not always using the belays from the first ascent. On the crux pitch I fell, lowered, stripped the gear and handed over the lead to Oskar. He sent the pitch and we climbed the remainder of the route, which for me was unknown ground, via mainly 5.11 cracks, topping out at midnight in beautiful moonlight.

The first four pitches of the route give fun and varied climbing on rock that while generally safe, features many loose or crumbling flakes. We dubbed this section the “Knäcke (Wasa) Pitches” after Sweden’s national hard bread. Above the ledge at the top of pitch 5 the rock quality improves and the climbing is pure pleasure – well, save for the last two pitches, but they were also pretty fun.

Later, Oskar and I climbed War and Poetry, the Bechtel-Bechtel-Lilygren-Mallamo-Model-Piana-Skinner free version (5.12c) of the Geneva Diedre (6b and A4, 1,000m, Dalphin-Piola-Probost-Wiestlibach, 1983) on the West Face of Ulamertorssuaq (1,830m). We climbed the route on-sight, ground up, and then rappelled, all in a 30-hour push. Each climber led or followed free, the only flaws being three hangs by the second climber on pitches 12, 15, and 26. On each occasion he lowered to the stance (on pitch 15 to a marginal stance) and reclimbed the pitch. We fixed no ropes nor made any stashes, though we did receive hugs and a few mouthfuls of tea from a group of girls in a portaledge just below the Black Heart.

Norwegian-Swedish parties repeated the Original British Route on the Left Hand Pillar (British E4 and A2, ca. 600m, Anderson-Dring-Dring-Tatersall, 1995) of Nalumasortoq. Magnus Eriksson with Peter Lothegius (Sweden), and Hilde Björgaas (Norwegian) with Hanna Melin (Sweden) climbed without jumars but with some aid here and there, mainly on the top pitches. Nathan Martin and Timmy O’Neil climbed the 18-pitch route free in 2003 on the third overall ascent at 5.12+.