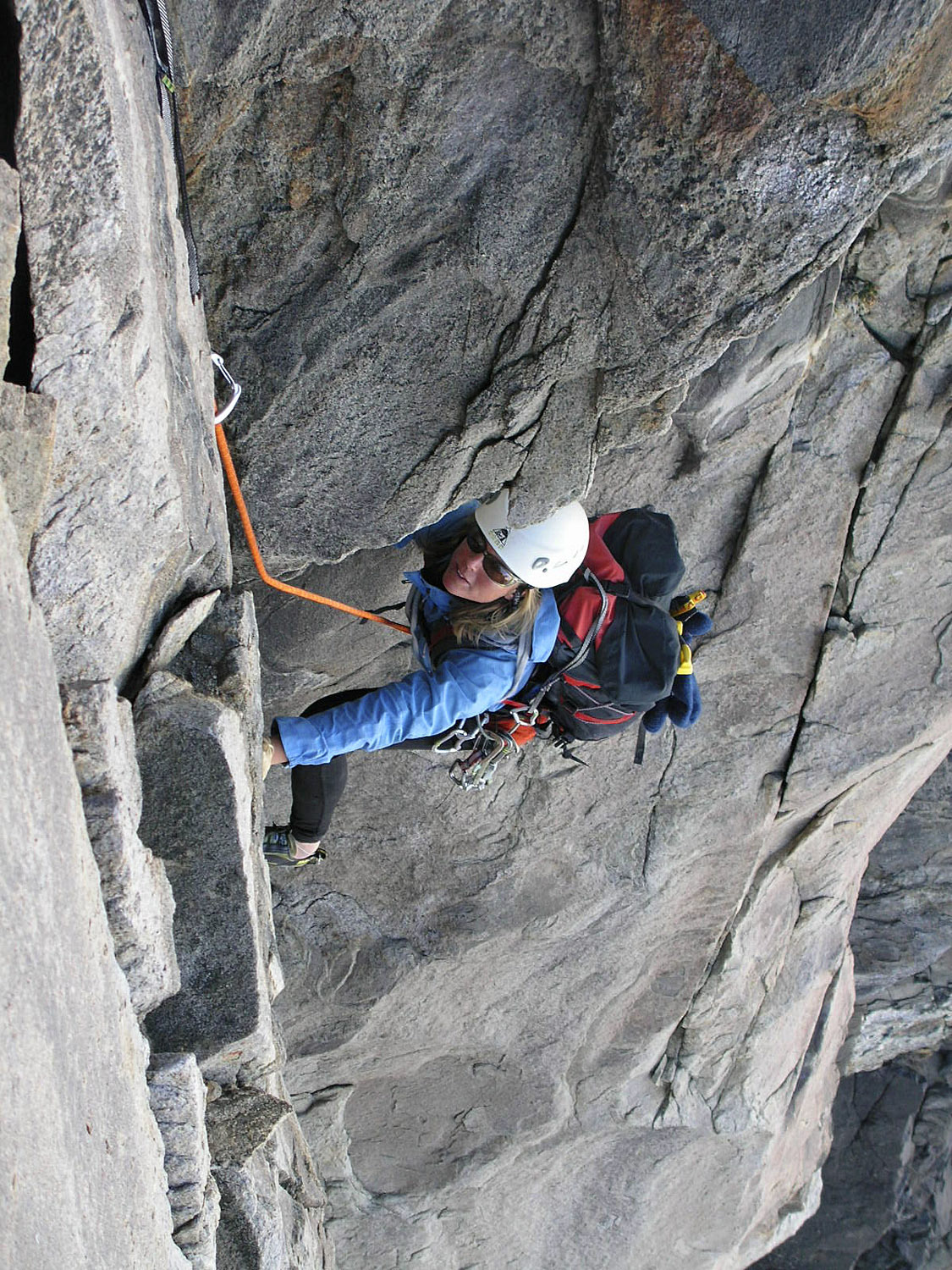 During four weeks in the summer of 2006, Anna Backlund and I climbed on gneiss walls in the Tupilak area, Schweizerland. We left Sweden in the first week of June and flew to Kulusuk via Iceland. Our food, climbing equipment, skis, and camping gear weighed 105kg, and the flight would have been very expensive if I’d not managed to negotiate a deal with the airline for free baggage. From Kulusuk we flew to a base camp on the September 16 Glacier, southeast of the summit of Tupilak. We’d expected to melt snow but found a stream, which saved much fuel and time.

During our first days we reconnoitered and climbed a small peak east of camp called Schartenspitze (1,720m). It was an easy alpine climb, which someone had been on before, as we found a piton and sling though no other signs of traffic elsewhere on the mountain. [Schartenspitze (1,720m) has been climbed by various lines, including difficult Italian and Austro-British rock routes on its south face.] We descended snow slopes easily to our skis, and then had several days of snowfall.

Our next goal was Tupilak. We wanted to climb the north face, but there was too much snow, so we opted for a line on the south face. There was 24-hour daylight, so when the weather cleared at midday, we set off immediately, ascended the heavily crevassed glacier to the base of the wall, filled our water bottles and started to climb. From farther away we’d spotted a promising line but now found we were unable to reach the start, so we opted for a crack system toward the center of the face. Fine pitches took us to an area of compact wet rock, but after a few ropelengths of poor quality climbing, we once again laid hands on steep, mostly solid gneiss. Just before midnight, and after 17 long pitches, up to UIAA VII-, we reached the snow ridge. We descended the crest east before rappelling and downclimbing to the glacier, reaching camp by 7:30 the following morning. We called our route Cake Walk. [Cake Walk lies above the glacier bay east of the one leading to the true south face of Tupilak and established German, British, and Austrian routes. Cake Walk finishes at a point on the east ridge of a secondary summit east of Tupilak’s east summit, and is the first known route on the wall above this bay.]

Our main goal fulfilled, we turned to a smaller wall on the south side of the September 16th Glacier, opposite base camp. The wall, which faces southwest, we named Duck Walk Wall and climbed it in nine pitches, to UIAA VII+, on excellent gneiss. We saw no sign of previous visits to the summit of this formation, which we traversed to the southeast, before rappelling into a snow gully right of the face. We named our line Via Nossnoj. [Duck Walk Wall is a subsidiary buttress on the west ridge of a complex massif, the main summit of which was called Sonnblick (ca 1,800m) in 2000 by Austrians Julian Neumeyer and Jorg Susnik, who were probably the first to climb it (northeast face to east ridge)].

The next objective was a fine spire northeast of Tupilak called Ravtanna (Fox Teeth), which is more or less at the foot of the southwest ridge of the previously climbed Red Wall (2,070m). We climbed the spire by its south-southwest ridge in seven pitches, up to UIAA VII, and rappeled into a snow gully on the far side. Our route could be the first part of a much longer climb to the higher peak. With time left for one more route, we focused on a large detached tower that lies close to the base of the south ridge of Rodebjerg (2,140m). We dubbed it Whiskey Pillar and climbed a line up the center of the southeast face in a 21-hour push. The climbing was amazing, with everything from superb hand and finger cracks, to runout climbing on compact gneiss with small roofs. We used three points of aid and called our 19-pitch line Unknown Expectations (UIAA VIII+ A1).

After a few days relaxing at base camp, we packed sledges and began our seven-day ski trip back to the coast, the Tasilaq Mountain Hut, and Kungmiut, where we were picked up by chartered boat and returned to Kulusuk. This proved a fine ending to an already great trip.