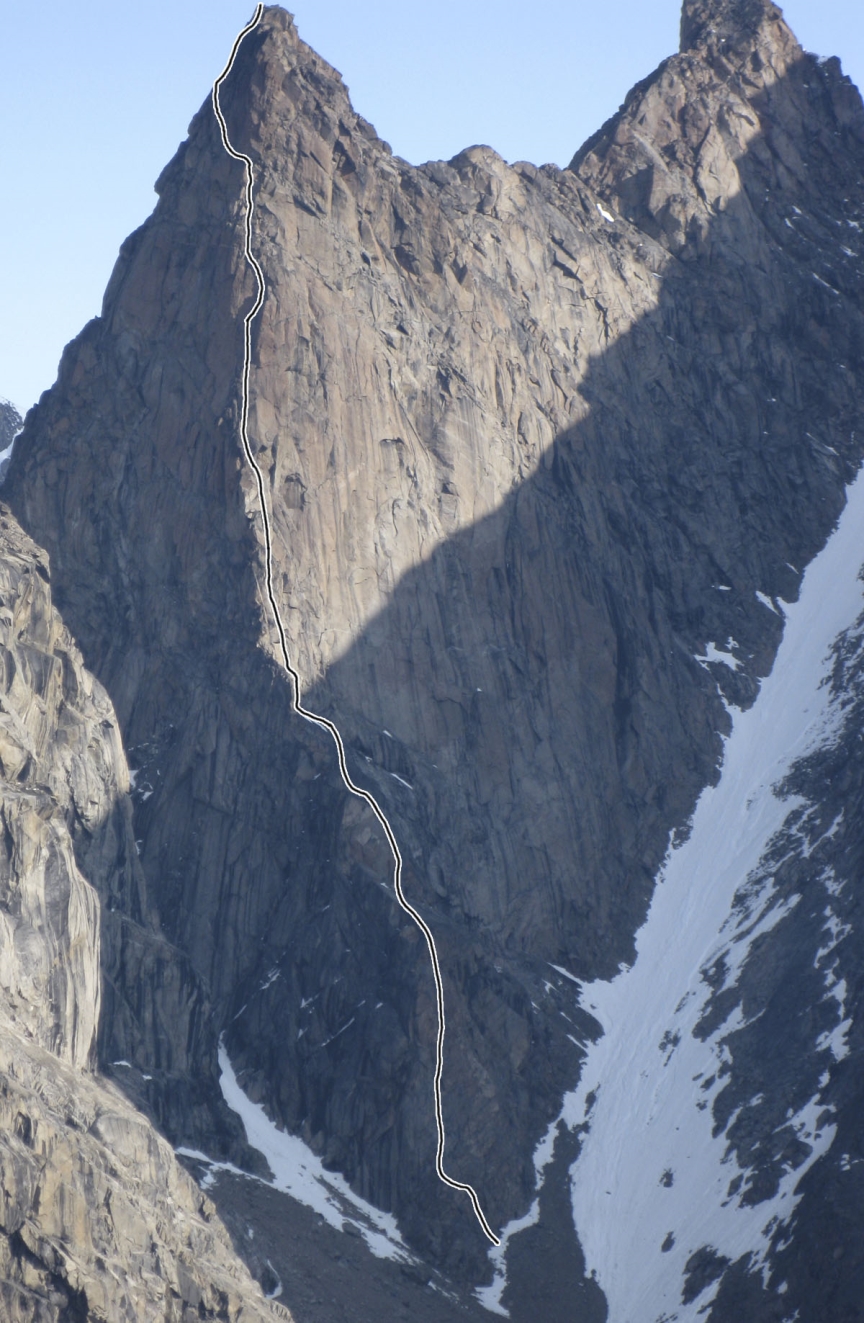 Over 45 days from early July through mid- August, Sean Villanueva, Stephane Hanssens, Olivier Favresse, and I had an awesome trip to Baffin Island. We hiked ca 600km, ferrying loads for only two weeks of climbing; it seems ridiculous, but the climbing and the place is so unique and amazing, and the potential for free-climbing and first ascents seems endless. All along the way to Mt. Asgard we found innumerable boulders, with perfect soft tundra landings, to keep us in shape.

Expert aid-climbing soloist Silvia Vidal, from Catalonia, traveled with us. She originally planned to solo a wall and then trek, but when she arrived at the base of her objective she didn’t feel motivated, so we invited her to join us. We figured we free-climbers could learn from her aid skills. Plus, she had a portaledge, which was nice since we’d taken just one portaledge and two hammocks to be lighter. Now only one of us would have to sleep in a hammock.

As we hiked up the Weasel Valley, many walls appeared. After a few days of hard hiking, we had to climb something. We split into two teams and went for it. Sean and Steph most likely made the first ascent of the northwest buttress of Tirokwa, to its main summit, by putting up Chocolate Boomerang (700m, 5.11) in a 24-hour push camp-to-camp. The line was previously attempted by Australians; the rock is excellent, with thin climbing and run-out sections. Meanwhile, my brother Olivier and I went for a virgin tower detached from Mt. Odin. We climbed the most obvious feature, up the prow, in an onsight push, likely making the first ascent of the spire, via Le Bic Rouge de Odin (800m, 20 pitches, 5.10).

With a bit of climbing in, we felt better ferrying loads to the base of our main target, Mt. Asgard. After a reconnaissance of two established aid routes, Inukshuk on the North Tower and the Bavarian Route on the west face of the South Tower, we attempted to free-climb the latter.

The climbing was excellent and sustained, with a bunch of pitches in the 5.12-5.13 range. After 11 days on the wall, dividing the hard leads among us, we almost succeeded in freeing a line. But ice has melted since the first ascent, in 1996, leaving the route’s original start 15m above the ground, and now the route has a new first pitch, on blank rock. After a failed attempt to free-climb it ground-up, we sent Silvia up with her babies (copperheads, hooks, and other funky tools) to solve what turned out to be “a really nice A4+,” in her words. For the rest of us, the groundfall potential of hanging on a #1 copperhead seemed nasty. We had to headpoint that pitch, and it went free at 5.12X or E8. Most of the harder pitches had to be redpointed and a few headpointed, to avoid adding bolts. The rock and the climbing were outstanding. Most of the pitches were splitter cracks, combined with hard face-climbing joining one crack to another. On pitch 7 I couldn’t link a one-meter section. I did all the moves, so the route should go free, probably at a minimum of 5.13+. It was just a bit too hard for us, especially after all the hiking, so we had to use a move of aid. We should also mention that we redpointed some other pitches after we reached the summit.

In order to free-climb, we made many variations, and almost half of the route is new. We called our variation the Belgarian (850m, 5.13 A1) to recognize the joint effort of Bavarians and Belgians. We must say, though, that the original ascent wasn’t done in best style, with many bat-hook holes, rivet ladders, and a few bolts next to perfect cracks.

After a few days of recovery and jamming with accordion, mandolin, tin whistle, harmonica, and drums, we set off for the North Tower, to climb it in alpine style. Sean and Stephane repeated the Porter Route (5.12 A4) in 24 hours. They onsighted all but three pitches, which they say would go free with a bit of work.

Olivier and I created a new line, we believe, on the northeast face of the North Tower. Our line, Whisky Gonzales, follows classic Yosemite-like splitters, and the quality is amazing. Both of us freed it onsight, in about 24 hours. The upper middle part shares pitches with the Brazeau-Walsh line. The climb is very sustained in the 5.10-5.11 range, and the climbing is sometimes delicate, with runouts on faces between cracks.

We had an awesome time climbing on Baffin. The weather was great, with comfortable temperatures and almost no precipitation. In summer there are no nights on Baffin, so it’s great for long alpine pushes—we never used headlamps. We definitely have to go back. The future of big-wall free-climbing is there.