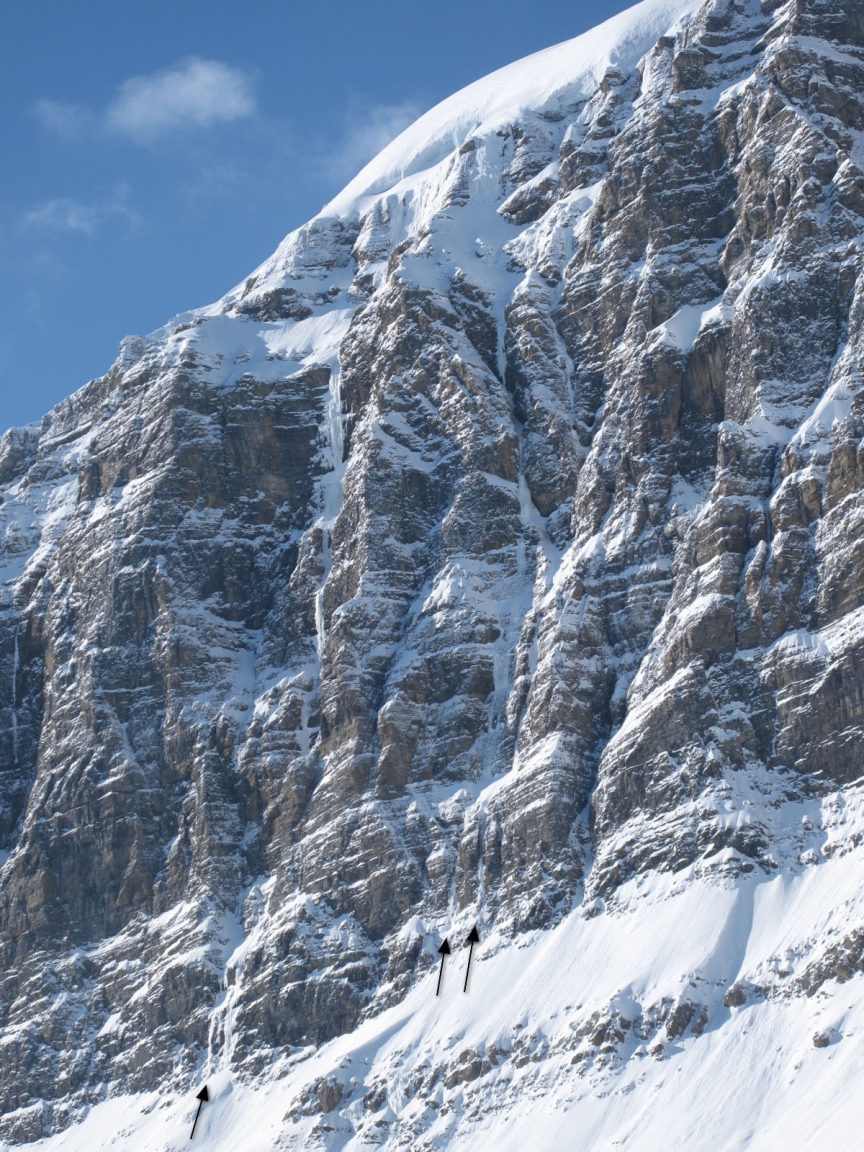 The most notable ascent of the otherwise quiet Canadian Rockies summer, despite a noteworthy succession of cloudless days, came in early August, when J Mills and Dana Ruddy slogged over Woolley Shoulder and sent the Lowe-Glidden on the north face of Mt. Alberta. The route has lost little of its reputation since its 1972 first ascent, and has likely been climbed fewer than ten times. Mills and Ruddy confidently set out from the hut below the east face, made the first one-day ascent of the route, and returned to the hut after a 30-hour roundtrip. They also nearly nabbed the first free ascent, with only a few hangs on the crux A2/3 pitch (5.10 A0).

Last winter (2009-10) a small crew of dedicated locals made essentially all the bigger sends of the season. Tool-swinging got off to a good start in late October with the first ascent of Facile Monster (420m, M5 WI5) by Mills, Steve Holeczi, and Eamonn Walsh. The route is tucked away in a remote drainage behind Mt. Murchison, and its ascent owes much to Mills’ encyclopedic knowledge of the mountains around the Saskatchewan River Crossing.

Mills and Walsh continued the charge, in January 2010 making the second ascent and first free ascent of rarely formed Suntori (1,500m elevation gain from road, discontinuous climbing and approach steps, M7 WI6), a striking ice line on the massive south face of Mt. Wilson. In February, Walsh and I climbed the parallel line Living in Paradise (1,500m elevation gain from road, WI6+), continuing from the end of the water-ice pitches up snow and mixed ground to the summit ridge, making likely the first integral ascent of the route. Among Walsh’s many other winter alpine ventures, in January he and Rob Smith made possibly the first winter ascent of Mt. Fryatt, via the Southwest Face.

Around the corner from the classic Curtain Call, climbers were lured by big unclimbed ice lines on the northeast side of Tangle Ridge. It was not until April, though, that Holeczi, Mills, and Mike Verway found the right combination of gumption and conditions and plucked the plum of the cliff, Undertow (600m, WI6). The route, with a long approach and endless succession of largely moderate but excellent pitches, received several repeats that confirmed it as one of the finest ice routes in the range. Walsh and I were then drawn to a less-obvious line to the right, resulting in Boobquake (600m, WI4+ M5). We returned the following weekend, finding Can’t Touch This (600m, WI5+ M6) between Undertow and Boobquake. Who would have thought there would still be big unclimbed ice easily seen from the road? Those are the Canadian Rockies for you, a big range with still plenty of potential.