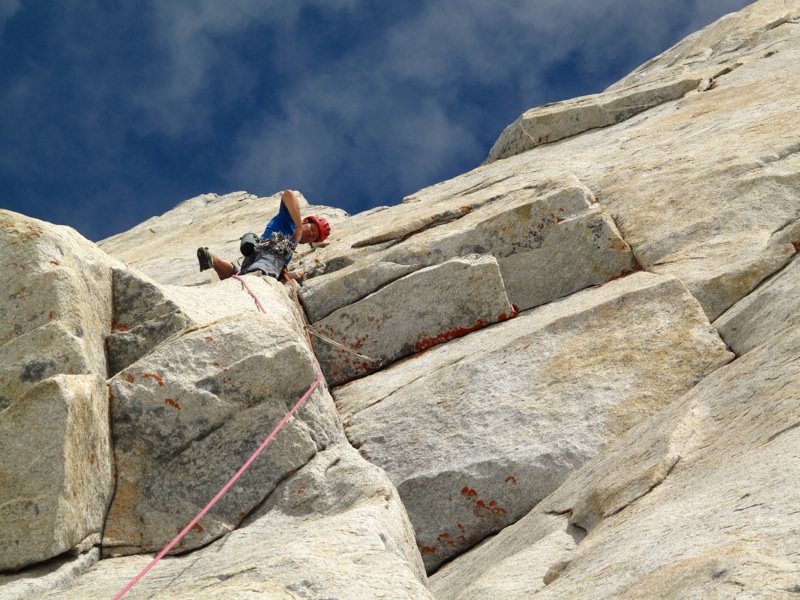 After warming up on über-classic Skywalk Buttress (600m, EDI 5.9) with my girlfriend Carlyle Norman and our friend Scott Everett, Craig McGee and I turned our attention to a line on the southeast face of Mt. Combatant, with hopes of establishing a free climb up the Incisor and continuing along the ridge to the summit.

On August 26 Craig and I climbed the lower portion of the Incisor, encountering steep technical climbing with multiple loose, run-out 5.11 pitches. The crux pitch had intricate thin crack climbing that required cleaning and two pins (the only gear we left). After the crux pitch we discovered several pins, probably from the route Belligerence. (We think we shared three or four pitches with it). After seven pitches of intricate, sustained climbing, we rappelled, fixing our two lines and leaving gear at the base.

Two days later we returned and quickly reached the crux pitch. After a couple of attempts and additional cleaning, Craig sent the pitch. However, the wall then steepened, with thin, bottoming cracks forcing us to resort to aid for 20m. After 15 sustained pitches, we found a comfortable bivy directly below the summit of the Incisor and fell asleep under a clear sky, with warm temperatures.

The next morning we continued along the Jawbone, a knife-edge ridge that connects the Incisor to the upper ridges of Mt. Combatant in eight chossy pitches. We exited this section after lunch and continued to the base of the Toothless Tower, where we stashed gear and simul-climbed a mostly independent line to the summit. (We descended the gully to the northwest of the Toothless Tower in eight rappels.) The rock on the Toothless Tower, in contrast to the Jawbone, was some of the most spectacular rock either Craig or I had ever touched; we padded our way up scooped dishes of bulletproof granite to the summit. After 20 hours of climbing, we sat on the summit enjoying the fruits of our labor: a warm breeze, a jaw-dropping view of Mt. Waddington, and a route to remember. Defiance (4,500', ED2 5.12 A3). Thanks to Mountain Equipment Co-op for making this trip possible.