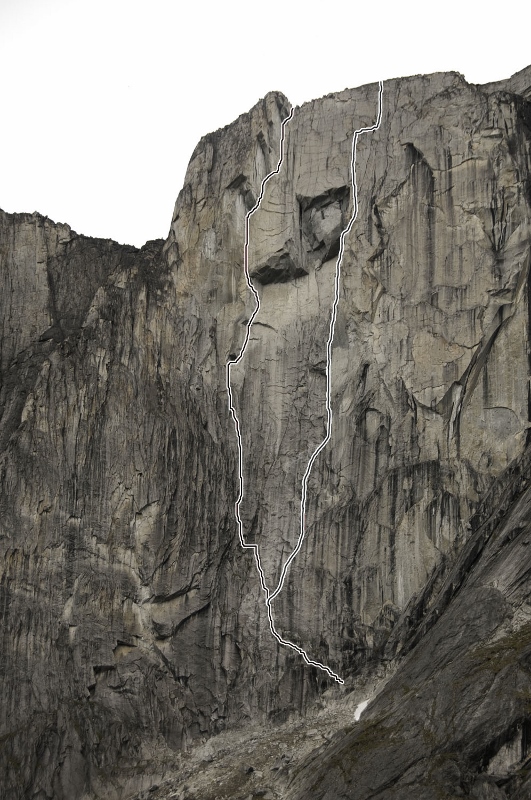 After a long journey in mid-July, Lisi Steurer (Austria) and I arrived in one of the most beautiful and wildest rock-climbing areas in the world, the Cirque of the Unclimbables, in Nahanni National Park. It was real Canadian wilderness—hard to believe for Euros like us. The first days we worked on the first free (redpoint) ascent of Riders on the Storm, on East Huey Spire, a 400m climb supposedly of Yosemite quality. The first pitch, a 5.9 offwidth, showed us how hard trad climbing can be. Later we enjoyed dihedrals and finger cracks, figuring out how finger-and hand-jamming is supposed to work. On our fourth day of effort, we redpointed the full route and yelled from the tiny summit.

Back at camp we visited neighbors from the U.S., who’d recently climbed Lotus Flower Tower. With them were two girls—their ground staff—cooking for their heroes. Food was well prepared. We thought about finding a boys ground staff for us, and suggested it to our friends Chris Atkinson and Marc Piche, who had invited us to the Cirque and were working on photographs for a new book. They just laughed—absolutely not, stupid idea!

At 5 a.m. the next day we started climbing the classic Southeast Buttress of the Lotus Flower Tower by headlamp. The first 5.10 pitch took me a while, because of wet rock and fatigue. I was completely fucked and could not think about 17 more pitches, up to 5.10c, that day. But it got better. The day was sunny, not a cloud, and we felt so lucky and privileged. Climbing the headwall gave me a big, big smile. Perfect cracks and chickenheads, long pitches and fast climbing. Just before the top I dropped a climbing shoe and climbed the last pitch barefoot, but we reached the top at 2:30 p.m., nobody there, just me and Lisi and the immense scenery of the Mackenzie Mountains.

The next day we saw a beautiful crack system in a huge dihedral with huge roofs on the south face of Middle Huey Spire. The 400m face had just one route (5.9 A3), done by an Austrian team in 1977 (Kosy-Lackner-Weilguny), but the left side of the face—the most solid part, also the steepest—was untouched. After a thunderstorm, we started up again in sunny weather, followed by thousands of mosquitos. We began with the first two pitches of the Austrian line (one was an awkward, wet offwidth), before heading into our dihedral. The rock got steeper and solider. Excellent finger-and hand-cracks led to a face pitch. We were installing bolt anchors, but I had tried hard to avoid setting protection bolts. After I took an eight-meter whipper onto a small pecker, though, screaming and stopping next to Lisi, and after another try, I was ready to set a few bolts. In three days of work we finished our route, with some aid. We placed four protection bolts, enough for freeing the route. After a rest day we returned, and I redpointed every pitch. Power of Silence (11 pitches, 5.12+/5.13-).

Our fantastic three weeks were over, and we loaded our heavy packs. Chris had been kayaking the Nahanni River, and when we reached the lake he was waiting for us, with great tasting beers and chips and blueberries.