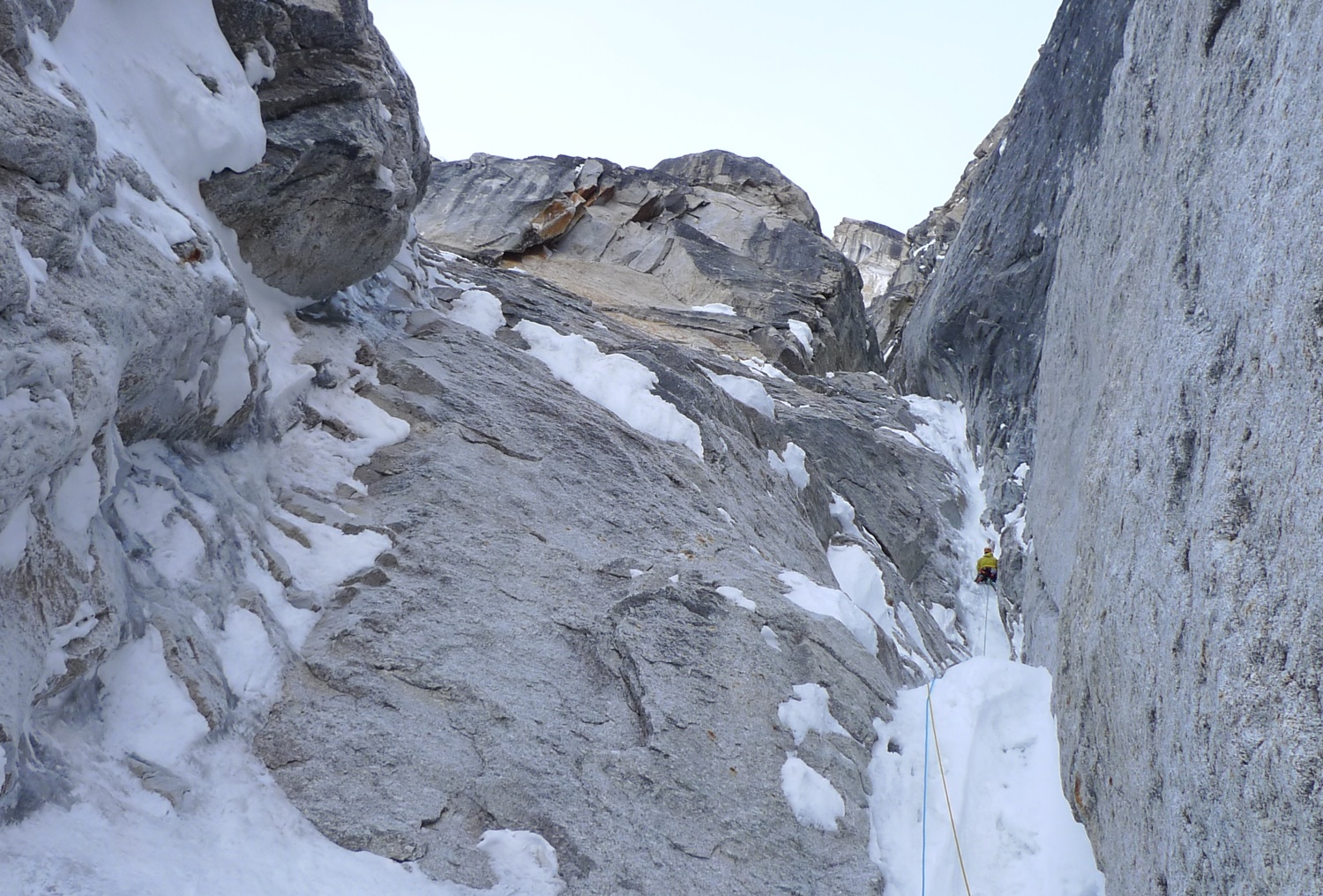 On April 12 Norwegians Nils Nielsen and Eiliv Ruud climbed a likely new six-pitch variation (AI4/5) of the modern classic Shaken Not Stirred, on the Moose’s Tooth. They took a rarely forming ice smear to the left of the Narrows section (marked “possible new variation” on the topo in Joe Puryear’s Alaska Climbing) for three pitches and continued up snow and ice, rejoining Shaken Not Stirred one pitch below the col. They climbed the route in a 15-hour round-trip from camp in the Ruth Gorge.

After an impressive effort on Mt. Huntington’s Harvard Route (27 hours round-trip, with retreat just below the summit), on May 21 Chris Thomas and Rick Vance returned and climbed a difficult new variation. The Community College Couloir (1,000', M7+ WI5) starts on the West Face Couloir and angles to the Harvard Route, joining it at the Nose pitch, before the climbers descended. It’s the highest of the many slashing systems below the West Face Couloir. The Puryear-Westman (2000) variation, below and to its right, is the only other of these systems known to have been climbed.

The famed North Buttress of Mt. Hunter continued to be a showcase for speed and technical proficiency, seeming like an Alaskan El Capitan. In May, Bjørn-Eivind Årtun (Norway) and Colin Haley made the fourth and fastest ascent of the difficult French Route (Grison-Tedeschi, 1984), in less than 40 hours roundtrip from base camp, including a descent of the long and complex West Ridge. They had first attempted the Bibler-Klewin route (Moonflower, as named by Mugs Stump after climbing high on the buttress in his attempt with Paul Aubrey in 1981, though true first ascent credit belongs to Todd Bibler and Doug Klewin, 1983). Årtun and Haley climbed from ‘schrund to Cornice Bivy in 16 hours, eventually retreating 100m below the summit, eschewing any rationalization of a “modern ascent” (i.e. stopping wherever you feel like stopping).

A small group of Swiss climbers flew in to Kahiltna base camp at the beginning of May, and made several impressive ascents over 24 days in the range. One such ascent was Simon and Samuel Anthamatten’s fastest ascent, by far, of Mt. Hunter’s Bibler-Klewin/Moonflower. They topped-out the buttress in 15 hours of climbing, bivied at the Cornice Bivy, continued to the summit, and descended the same route, making the roundtrip from base camp in 36 hours. Also on Mt. Hunter, the Anthamatten brothers and Andreas Steindl climbed a likely new route on a prominent face west of the Rattle and Hum Buttress. Their line (2,500', M4+ WI4+ AI5) weaves up mixed terrain, with seracs on either side, and continues along a heavily corniced and mushroomed “Himalayan-like” ridge until joining the West Ridge route, from where they descended (Simon and Samuel had already summited Hunter). Toward the end of their trip, one of their friends received a birthday delivery of pizza, booze, and cake. Samuel wrote (www.anthamattens.ch), “I would have paid $100 extra for some fresh apples.”

Canadians Dave Edgar and J Mills made a rapid repeat of Deprivation (Backes-Twight, 1994), with a significant variation between the second and third ice bands, where the original route does a big zigzag. Edgar and Mills essentially climbed straight up from the left side of the second ice band—yet still right of The Knowledge (Cartwright-Parnell, 2000)—adding five pitches of WI5 before joining the Moon-flower for the Bibler Come Again Exit. Photo at www.cdnalpine.blogspot.com. They made the massive roundtrip from basecamp to summit and back in 45 hours. 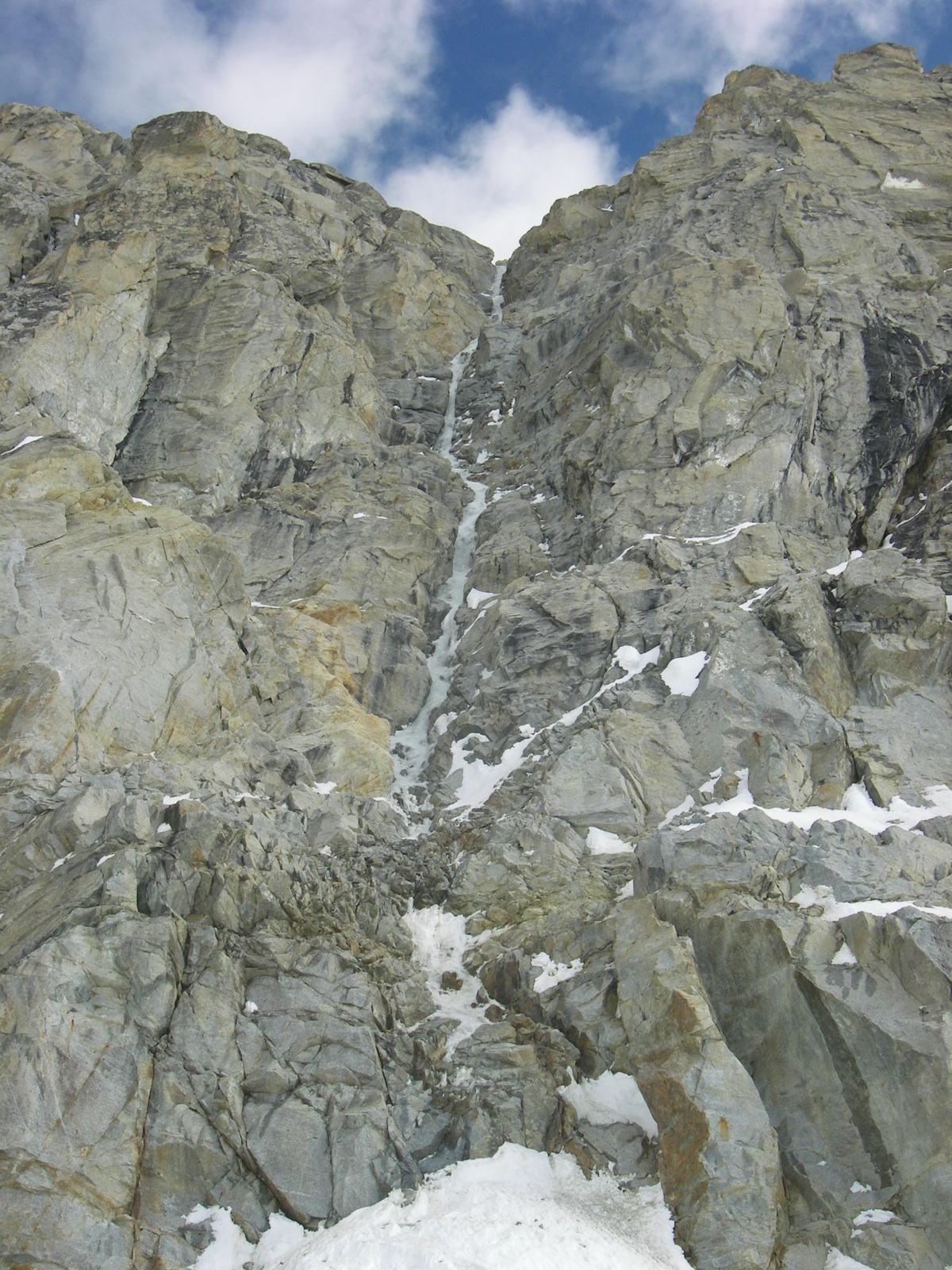 In mid-May Japanese climbers Genki Narumi and Katsutaka Yokoyama made a free and extremely rapid attempt (with variations) on perhaps the hardest line on the North Buttress, the Wall of Shadows (Child-Kennedy, 1994). Carrying only fanny packs, they started with the logical, albeit easier, Gilmore-Mahoney (2001) variation, and made variations to the Enigma pitch, the Somewhere Else Wall, and also a thin ribbon pitch above. They rated their climbing 5.10-M6R WI5+, reached the Cornice Bivy in 29 hours (including a six-hour brew stop), and retreated from there.

On May 25 Iku Mitoma, Hiroki Suzuki, and Kei Taniguchi (Japan) climbed a beautiful, albeit threatened, mixed line on the north-facing wall between the Mini-Mini Moonflower (or Micro Moonflower) and Kahiltna Queen, about two hours east of Kahiltna Base Camp. Wasabi Gully (M4x WI4+) climbs eight pitches and ends at the serac band.

In early July, Ryan Bougie and Marcus Waring made the first ski descent of Mt. Foraker’s Archangel Ridge. Making a giant loop from the Kahiltna Glacier, the pair climbed Sultana Ridge, skied Archangel down to the wild, remote north side of the peak, then climbed back out via Mt. Crosson’s northwest ridge and skied Crosson’s southeast ridge back to base camp.