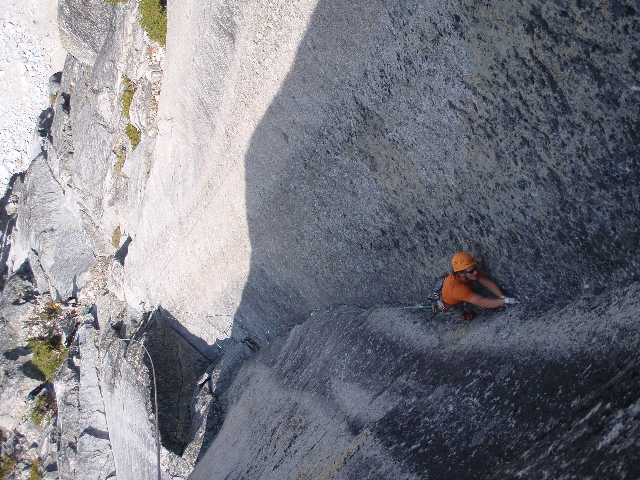 After an early June ascent to check out and clean the more difficult pitches, Matt Clifton, Evan Cabodi, and I returned to Colchuck Balanced Rock (CBR) on August 9 and completed a free ascent of our new line. The Scoop (III+ 5.11c), named for the crux pitch, which looks like it was carved by a giant ice cream scoop, follows a line of beautiful cracks, linked with excellent belay ledges, to the right of the West Face and the Tempest.

The first three pitches provided climbing up to 5.10a, to reach “Launch Ledge” and the base of the Scoop pitch. On our exploratory ascent we found it clogged with black lichen; the overhanging upper half of the 60m pitch looked to be a difficult seam requiring much cleaning before a free ascent might be possible. Loaded with aid paraphernalia, I set out on the Scoop’s namesake pitch. With each step I found easy cam placements in the crack, and I knew with a little work this would be a stellar, sustained free pitch. Over the next two days we climbed the last two difficult pitches through a series of fun roofs and cleaned the lichen-filled cracks.

Returning in August, we had only slightly better weather, but the approach was easier without aid gear. Our goals were to complete the route to the top of the peak and free the previously aided pitches. We nearly accomplished our goals by the second day, with Evan almost sending the Scoop pitch, and Matt and I freeing the upper roof pitches at 5.10b and 5.10a, respectively. We finished with a simul-climb of the last four pitches to the summit of CBR. Freeing the Scoop took several attempts over the next couple of days, but on our last day Evan successfully led the pitch clean, and I followed it, completing one of the best 5.11 hand-and-finger cracks any of us has done in the Pacific Northwest. We left no bolts or fixed gear for the climbing, only leaving natural anchors for the descent. The route can be rappelled with two 60m ropes, to avoid the loose descent.