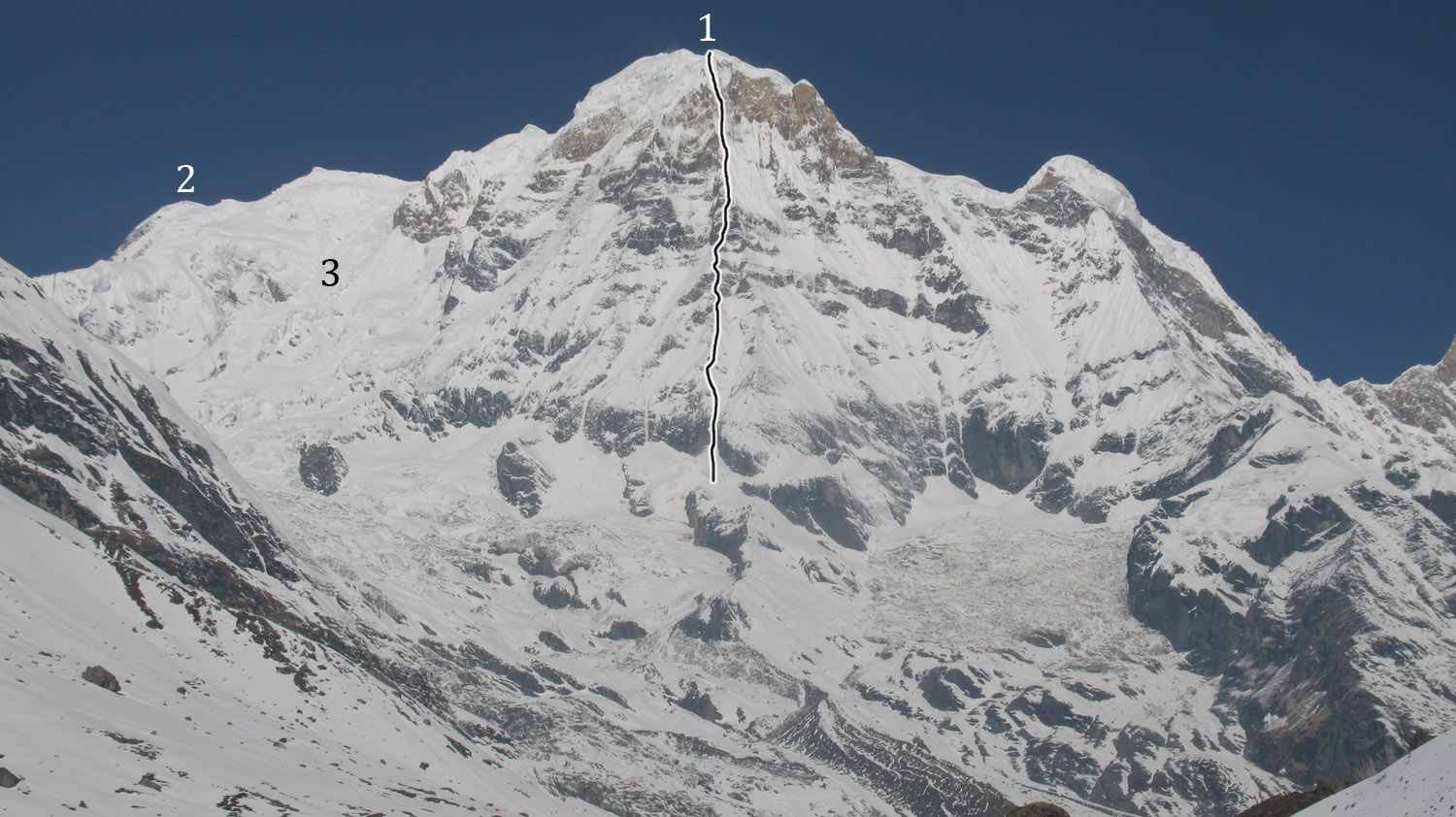 People say that Annapurna is dangerous from the north, dangerous and difficult from the northwest, and steep, dangerous, and difficult from the south. My first experience with Annapurna was in the autumn of 2008, when I tried to climb the northwest face in alpine style. After five days of climbing, Petr Masek, Martin Minarik, and I reached 7,500 meters. Strong wind, freezing cold, and heavy snowfall during our summit push drove us down. Nobody wanted to try again.

In the spring of 2009 I returned to Annapurna, this time to the south face, with Martin Minarik from the Czech Republic and Elisabeth Revol from France. We reached base camp on March 19 and soon started acclimatizing. The weather was predictable: In the morning it was clear and warm, and in the afternoon there were thunderstorms with snow. Every day the same, plus huge avalanches. The conditions this season were not the best.

Our dream was to climb the Bonington Route in alpine style, but really we just wanted to find any safe route to the summit of Annapurna. After a few weeks in the Annapurna Sanctuary, we decided that, indeed, the Bonington Route would be the best choice. The route has more than 3,000 meters of climbing, with demanding rock and ice passages. Our idea was to climb the face in seven days, and then we had two options: traverse the Annapurnas eastward to Manang village, or rappel the route we had climbed. We chose the second.

During our first two days we reached 6,100 meters. Conditions were not good: deep snow and warm. But we were fast and full of power. On the third day we woke early and the sky was filled with long clouds. As we started to climb, heavy fog lay everywhere, and soon it started to snow. Martin checked the forecast in late morning: strong winds and heavy snowfall during the next few days.

The decision to retreat was not easy, but we knew it was the only way to survive. In deep fog, we retreated to our campsite at 6,100 meters and then to base camp the next morning. We were sad because I would not have time for another attempt. It snowed during the next few days, and our thoughts were simple: go home, go sailing. But suddenly we got a new forecast—the weather would improve for several days. Our tent was quiet; the chessmen stopped moving. Martin’s goal was clear: He wanted to try Annapurna again with Eli, this time by the Joos-Loretan Route on the east ridge.

It was Tuesday, April 7, and Martin and Eli planned to start on Friday, when the weather was expected to improve. And me? I still had several free days before my flight home, but I didn’t have time to attempt Annapurna. I wondered how I would kill time in base camp. Then, after a night of reflection, I decided to try Annapurna South.

Before this, Annapurna South had only been one of the peaks visible from base camp—we could clearly see its 1,700-meter east-southeast face, split by a shallow prow that leads directly to the northern summit at ca 7,100 meters. Now I wondered why nobody had climbed it from this side. I knew only the peak’s altitude and that there was a route from the south (Bashkirov-Cherny-Lobankov-Minibaev-Shataev, 1994). Nothing about the descent, nothing about the history of the peak. Maybe that was why I decided to climb it.

Friday, April 10. It reminded me of the day in 2005 when Gabo Cmarik and I stood beneath Great Trango Tower, selecting the gear for a huge wall. Only the most important things. But today I had to do it alone. My idea was to climb the virgin face in a single push. I wanted to be light and fast, enjoying the climbing, feeling the air, and not carrying heavy loads. I had soloed difficult walls in winter and had a lot of experience with high altitude; I was well-acclimatized from our attempt on the Bonington Route. I felt good, and I wanted to use everything in my power, not only to summit but also to make a technically difficult, nonstop ascent.

I left base camp with Martin, Eli, and two Sherpas on Friday afternoon. After crossing the glacier to Annapurna Lodge, we stopped and I looked into Martin’s eyes. He was happy. Eli was also full of power and optimism, as usual. Only I seemed worried about their climb—they planned to spend an unbelievably long time up there (about 12 days), and they carried heavy loads. But I believed they could climb the east ridge.

I ordered soup and pizza and a cup of tea. I smoked two cigarettes. Then, at 7 p.m., I left the safety of the friendly lodge.

The sky was clear and Annapurna South rose in front of me. I crossed the glacier and found the entryway to the face: vertical and overhanging water ice, the only way to reach the snow ridge in the middle of the face.

I had climbed 150 meters and it was already midnight when I reached a mixed section where I thought I might have to retreat. These were the hardest moves of my life—like drytooling on a sport route. The ice was good, but climbing it in the dark with only the small light of my headlamp was more than serious.

After a whole night of climbing, I finally reached the snow ridge and continued up to the steep first rock band. Now I felt safe. The sun was up, and the steep ice and avalanche terrain were behind me. I thought the route would be easier, but it was not. I struggled to find a way through the rock band. Ice fell everywhere. Then came the second rock band, steeper, with many tricky sections. I established a belay from two rock pitons and used my 6mm rope to protect myself. I had to make many moves without gloves. Unreal exposure! I could see the sunny valley, holy Machapuchare, Annapurna III, Ganggapurna, and somewhere down there the Annapurna Lodge. Beer, pizza, people. I was a big attraction for the tourists that day. Again, I believed I’d soon be on good terrain, but I was wrong again.

The conditions were getting worse. The ice and snow were melting, and it was much harder to find good belays. I climbed strange snowy ribs with no protection. After that came a wet rock wall with icy sections. The wall was steep, with thin, wet cracks, but I had no choice. I had to climb it.

Higher up I had to use more protection, and that made me slower. But finally, at 3:20 p.m., I reached the ridgetop, at about 7,100 meters. From here I thought the only possible descent would be to traverse southwest toward the main summit (7,219m) and continue down the east ridge toward Hiun Chuli; I had seen a snow gully that seemed to lead to the glacier from this ridge. It was late afternoon, and the way along the ridge was very long and in places dangerous and difficult, with ice towers and crevasses. But the snow conditions were perfect, and the weather was very good. When I reached the ridge down to Hiun Chuli, it looked too sharp and dangerous, but I could see the top of Annapurna South was not far, so I kept going. After another 40 minutes on easy ridge, I reached the summit at 6:18 p.m.

I decided to return to the saddle and descend directly to the east. There were huge seracs, deep snow, and hidden crevasses everywhere around me. Where to go? What was the safest way? Suddenly I fell five meters into a hidden crevasse; only a snow bridge stopped me from falling deeper. It was dark except for a bit of light from the hole I’d left above. I anchored myself to my tools and an ice screw, and fished for my headlamp in my pack. Then I climbed quickly toward one end of the crevasse, clawing through the soft snow near the exit.

Outside it was dark. I wondered if I should bivy and continue down the next morning. I don’t know why, but I chose to continue. Exhausted, I finally reached Annapurna Lodge a little after 3 a.m. The lodge was closed, so I continued toward base camp, two hours away. As I started walking, an enormous avalanche fell from the serac atop the east face, crashing across the route I had just descended. I started to cry. I was happy that my decision to descend that night had been correct.

Forty hours after leaving, I returned to base camp. Our cook Temba helped me walk the last few meters and prepared tea and soup. My ascent had given me everything I wanted: I felt the thin air, climbed high into the unknown, and used all my experience from climbs I’d done before. It is hard to say how difficult the line I climbed really was, but that’s not important. The mountain just gave me one chance to climb a perfect line in a fair style.

The next day I ran down to Pokhara and started toward home. When I finally got home to Slovakia, I fell ill with a fever; I still had a strong cough as I traveled to Chamonix to join the Piolets d’Or jury. During my time there, I got a sad message. Martin Minarik was missing on Annapurna. [Editor's note: Elisabeth Revol, forced to descend alone when Minarik could no longer move, made it down safely.] I couldn’t believe it. Only a few days earlier Martin and I had played chess in base camp, and now he was gone. And with him his smile and dreams.

Ascent: Solo, single-push first ascent of the central line on the east face of Annapurna South, also known as Annapurna Dakshin or Modi Peak (1,700m, ABO V+ WI6), Dodo Kopold, April 10–12, 2009. From the ridge crest at ca 7,100m, Kopold traversed southwest to reach the main summit at 7,219m, then returned to a saddle and descended to the east. The central prow on the east face had two known previous attempts, by a Japanese party that disappeared while trying the route in the mid-1980s and by a British team in the spring of 1989.

Born in 1980, Jozef “Dodo” Kopold began climbing in 1997. He lives in Bratislava, Slovakia, with his wife and two children. Kopold wrote about a new route on Great Trango Tower in the 2006 American Alpine Journal and about ice climbs in Trango Valley in 2007.