Originally we had planned to attempt a first ascent of Kawaluori (Kawarani) near Ganze. However, it proved impossible to secure permission due to religious celebrations and the need to avoid disturbing the delicate political balance in the region. We believe the monks, who refused permission to climb the mountain to a 2005 expedition, were never approached on this occasion. On consultation with Lenny (Chen Zhenglin), our liaison officer and base camp manager, we switched our objective to Garrapunsum, an unclimbed peak in the Jarjinjabo range farther south, that was formerly called Jarjinjabo, probably based on the Chinese PLA map (see naming note, below). Our main goal was for all six team members to make a joint first ascent, and route choices revolved around this goal.

As we had intended to climb a different mountain, we had not researched Garrapunsum and had little information about our new objective. We had a single photograph of the south side and the Chinese PLA 1:100,000 map of the Jarjinjabo, Xiashe, and Hati Massif as found in Tamotsu Nakamura’s book, East of the Himalaya: the Alps of Tibet, and other articles written in the Japanese Alpine News by the same author. We established base camp at 4,200m in the Zhopo Pastures (30.5430N 99.4571E) under the west end of Garrapunsum on September 26. We reached this point in 4x4 vehicles, thus avoiding a long walk. The mountain has three main summits, from which it gets its name, meaning “three blacksmith brothers.” These form a longridge running southwest-to-northeast, with subsidiary summits at the west end. The sketch map suggested that to the east of the main summit the ridge splits in two, forming a V and connecting to adjacent peaks to the northeast and southeast. Glaciers flow into the heads of both north and south valleys, and we guessed these led to the eastern ridges. The flanks of the mountain consist of impressive buttresses, hanging glaciers, and gully systems. Although several lines stood out on both the north and south sides, only one appeared to be suitable for our group. This involved a large but reasonably angled north-facing buttress, with a number of possible routes through mixed snow and rock, followed, we presumed, by snow to the summit out of sight. Total height from the valley floor: somewhere around 1,200m.

On September 30 Hamish Rose and Simon Mills scrambled up the lower buttress to a good bivy at 5,200m. The following morning they made two attempts to forge routes through loose mixed ground that proved steep, precarious, and prone to rockfall, finally conceding that it was too dangerous to continue.

Meanwhile the rest of us took on an acclimatization peak across the valley and gained the summit of an unnamed 5,434m peak (referred to here as Man Chu Gangri—see naming note, below). Our route followed the obvious deeply cut river gorge on loose moraine, until we could gain the glacier, and then threaded through crevassed but generally easy-angled snow to the summit. This gave us a good view back to our main objective, where we spotted a possible alternative route that was not obvious from the valley.

With the new route in mind, we hired horses and a handler from the local nomadic people to move kit for five days, and on October 3 established an advance base camp at the head of the north valley, at 4,600m. We then made an exploratory climb, following the easy-angled slopes of the main glacier up into the heart of the massif until we could get a clear view of the route to the main summit, which appeared to be a reasonable snow climb all the way, then we retreated to ABC.

We made the final climb from ABC on October 6, leaving at 4 a.m. and summiting around 1 p.m. The route followed the main glacier to a short steep snow slope (50°-55°) on the north side of the southeast ridge. We climbed this directly through a cirque and then followed the ridge to the summit. Half of the party remained at the access point to the ridge, while the remainder of the team continued 150m to the northernmost of the “three blacksmith brothers.” The central brother was distinctly lower than the main summit, while the southwestern brother was slightly lower. Because of dangerous snow conditions on the connecting ridge, we did not cross to the far west summit, which is still unclimbed. All team members reached one or more of the summits. Theresa Booth, Charles Kilner, Evelyn Mullins, and Basil Thomson climbed Man Chu Gangri on October 1. Charles, Simon Mills, and Hamish climbed Garra- punsum on October 6. Theresa, Charles, Evelyn, and Hamish are members of the Rockhoppers Mountaineering Club.

We had consistently good weather, with clouds in the mornings and only light winds. Apparently three days after we left base camp it snowed down to below 4,000m, which would have stopped us had we still been climbing.

Notes on mountain names: Garrapunsum is the phonetic spelling of the Tibetan Khamba name. Garra means “blacksmith,” Pun means “brother,” and Sum means “three.” The Chinese character phonetic spelling has been recorded as Kalabingsong, Galabison, or Garap- insung. We used Man Chu for the unnamed 5,434m peak, as that is the name of the river (chu meaning “river” in Tibetan) and the ridge in front of the peak. Gangri was added, meaning“snowy peak” in Tibetan. Kawaluori is the phonetic spelling of the Chinese name. Grid refer- erences: Kawaluori: 31.4525N, 100.2167E; Garrapunsum: 30.5783N, E99.4940E; Man Chu Gangri: 30.6062N, 99.4677E. 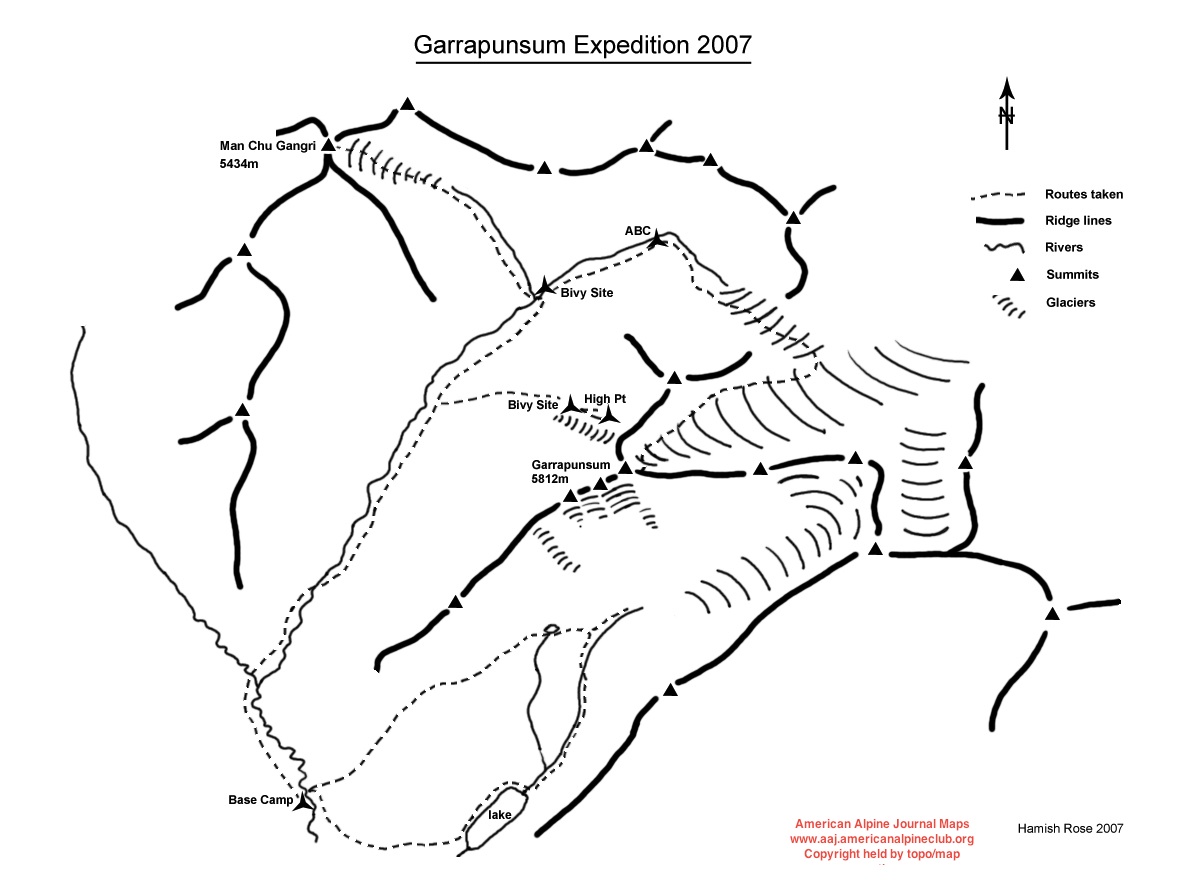