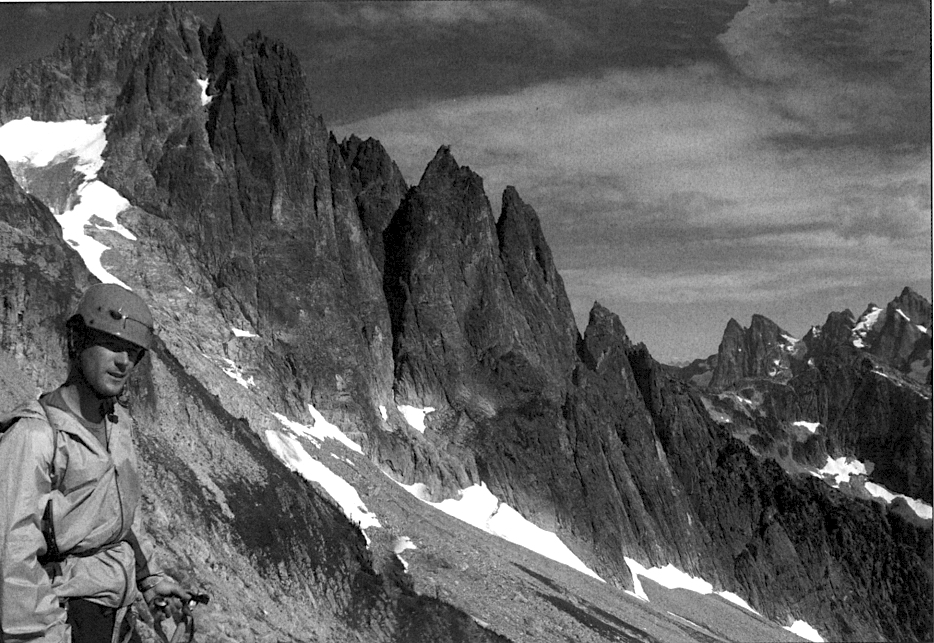 IT STARTED by our looking, again, at a stupid map. The coolest USGS quadrangle in the Lower 48 is, by far, the Challenger map. It contains both the Northern and Southern Picket Ranges, with long, serrated ridges and enormous vertical relief rising from remote valleys. “Mongo Ridge,” as it was pre-named by local enthusiast John Roper, is the South Buttress of the West Peak of Mt. Fury. The map reveals a mile-long, 4,000' vertical rise, interrupted again and again by towering monoliths and gendarmes.

Mike Layton and I gaped at it while climbing the Haunted Wall on the west face of neighboring Spectre Peak, and agreed that it was a monster of grim fantasy. I even ventured that it might never be climbed, for a number of reasons. For one, all of the possible approach routes appeared to entail several days of strenuous bushwhacking. But the key hit me one night, pre-sleep: instead of approaching up the hell known as Goodell Creek, climb East Fury and descend to the ridge! I would just need to climb a major mountain to reach the start of an even more major climb.

I tried for a couple of days to find a qualified partner. Finally, I could take it no longer. Colin Haley’s slide show about a first ascent on Mt. Moffit in Alaska set my blood on fire. When I got home from the show, I packed and left at 4 a.m. the next day, Thursday, August 24.

My plan was to power the 60+-pound load to the top of East Fury in two brutal days, meaning I had to get through the brush of Access Creek on day one. A bee sting on the left eyelid, the usual brush, and a violent, several-hour thunderstorm reintroduced me to the gauntlet of adversity and special pain available during approaches in this range. But Friday night I slept atop East Fury, feeling utterly spent.

Despite my wishes to stop it, the planet spun around, and again I awoke to face the solar onslaught. Morning light revealed a relatively easy way down to what felt like my ultimate doom: a route you would only see in the greater ranges of the world, and one to scare the boldest of explorers. As I began my descent, my iPod played the ominous words of the Talking Heads: “And you may ask yourself: My God, What have I done?”

It quickly became apparent that it was going to be tough just cresting the ridge. After several pitches I gained a somewhat clean ridgeline, which never failed to entertain me over the next two days. On the ridge, as I set the first of a dozen rappels, I knew each subsequent descent would render retreat increasingly difficult, dramatically increasing the commitment level.

After my fourth rappel, a full-length double rappel, I reached the base of a pinnacle that could itself be a major summit. The traverse rightward across the face led to a shallow yet steep prow. Although I was going unroped as much as possible to save time, it was time to break out the hardware. Up I climbed again and again until I ran out of rope, each time returning down the rope to retrieve anchors and pack. The knobby arête offered steep and exposed climbing. A 5.10 pitch made me hope it was the most difficult section of the massive route. Hundreds of tough feet later I finally balanced atop an incredible perch.

Rappelling down the other side of these pinnacles was now becoming an awesome routine. The backside of pinnacle #3 was so steep that I dangled in space much of the way down.

Pinnacle #4 was also hard going. I was again unroped, and as I did another scary traverse left, cramps mutated my hands into grotesque arthritic shapes. As the climbing continued, the rock again proved to be of fantastic quality and solidity.

As the afternoon wore on, time seemed to tick quicker, and I grappled with a difficult knife-edge horizontal traverse. Evening rapidly approached as I neared the final obstacle. A dreaming John Roper had already named this pinnacle the “Pole of Remoteness,” figuring that it had to be the hardest place to reach in the 48 states. I wasn’t going to argue. I looked ahead for a way up and, even more, a flat place to sleep, but neither was apparent from below. It was the only pinnacle that allowed me an easy way around it; graciously I accepted a narrow ledge system to the right instead of the 5.11 headwall straight above. I reached the deep up-hill notch and found it an accommodating 5.7.

Although I found the way to its summit easily enough, I had an eerie feeling that something might happen, that attaining the summit of the “Pole of Remoteness” would extract a price. With no solid rappel anchors, I slung a loose block as a handrail/rappel line. As I descended, a rock severed the rope. Fortunately, I still had the second line.

As the sun set, I made a dash for somewhere to camp. Now climbing into the 13th hour, I spotted a small glacier clinging to the south side of the upper ridge. The moat between it and the rock would provide shelter. As I drifted off to sleep, I reflected on the hard climbing of the day, grateful to live in a state that could still provide this kind of adventure.

In the morning 500' of elevation remained to the summit of West Fury. The way eased off to class 4. Tired, but not about to let down my guard, I stood atop West Fury at 10:00 a.m.

No wonder the Picket Range is so revered. In my few trips here I have renewed my enjoyment of the sport and my appreciation for the truly wild.

The journey was still far from over. I forgot how complicated it is getting from one Fury to the next. It involved more rappelling and tons of ridgeineering. All that was left from East Fury was to retrace the long glacier and ridges to Luna Col. There I went down in a heap of pain. Spending my last night there, I rehydrated, ate, and cried when a sad song played on the player.

Some final stray thoughts: I believe the nature of sport pushes the player to reach for more and continually improve. Everyone who safely does so will see the personal accomplishment that my friend Erik Wolfe describes as “the trip you never fully come back from.” Enjoy the mountains and help keep them wild.

The enormous Mongo Ridge (skyline) on the West Peak of Mt. Fury. Mike Layton in the foreground, during his and Wayne Wallace's Haunted Wall trip.
Wayne Wallace
Previous Next

The enormous Mongo Ridge (skyline) on the West Peak of Mt. Fury. Mike Layton in the foreground, during his and Wayne Wallace's Haunted Wall trip.
Wayne Wallace
Previous Next