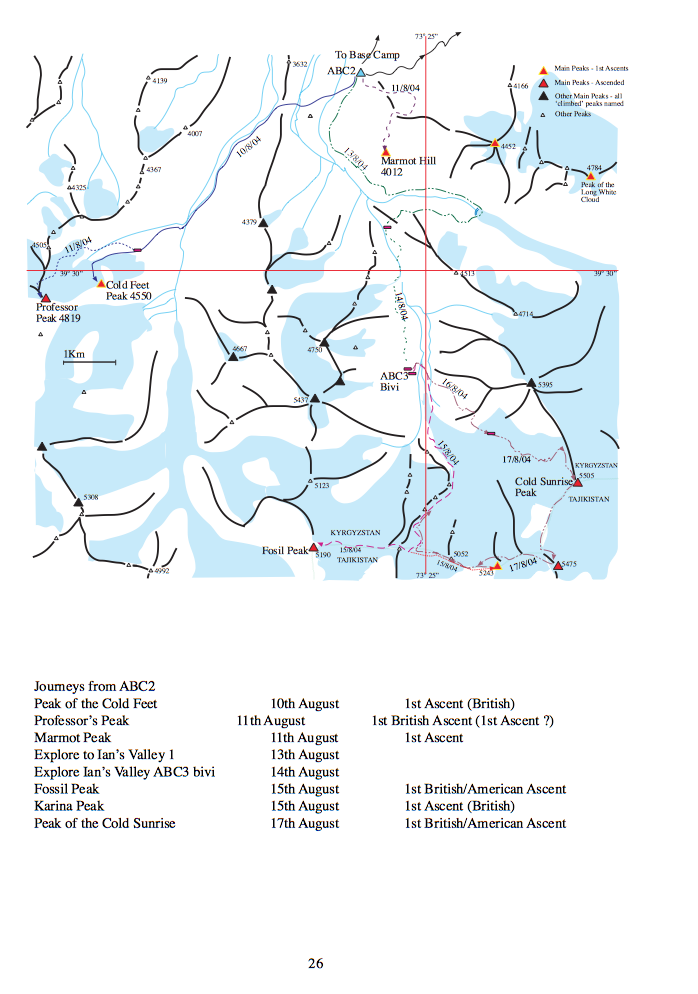 On July 22 a team from the UK, including a US citizen now working in Scotland, set off for Kyrgyzstan. The team consisted of Ian Arnold, Ken Findlay, Paul Hudson, Paul Lyons, Will Parsons (all UK), Susan Jensen (USA) and Shaun the Sheep. Shaun was a toy “Wallace and Grommit” sheep and was on the trip to raise money for the Alpine Fund, a charity started some years ago by Garth Willis, an American working in Kyrgyzstan. The Alpine Fund helps disadvantaged and orphaned children make the most of themselves and uses the hills and mountain environment as a tool to make this happen.

The team chose a less frequented area of the Pamir south of Sary Tash and east of the main road leading from south Sary Tash into Tajikistan. A little further east along the range is the triple-border point of Kyrgyzstan, Tajikistan, and China. The venue was chosen to fit a one month’s vacation, all that half the team could manage. A direct flight from Heathrow, London, to Almaty (Kazakhstan) via Astana Airlines, a drive to Bishkek (Kyrgyzstan), and another flight of a couple of hours landed us in Osh. From Osh it was a day’s drive to our area of the Zaalayskiy Ridge.

There were some initial difficulties when we found out that the in-country company had placed our base camp in the wrong place and we had to negotiate its relocation. Subsequently, base camp was not quite in the right place and few of us used it much during our stay, spending most of our time at two advanced base camps, designated in this report ABC1 and 2, from where we explored two different valleys. The best venture from ABC1 was a two-day excursion to Charity Peak. After a night spent on a ridge south of Krazha and descent to the adjoining valley the following morning, Susan Jensen and Ian Arnold took a serac-threatened lower route while Will Parsons, Ken Findlay, Shaun, and I chose a lovely hard névé ramp. We joined forces higher on the ridge. Named Andy’s Route, after Andy Bennett, a friend of Ian’s killed in an Alpine accident in 1990, the climb varied between a snow plod and some exciting bits and pieces, where ice or rock jutted out. A grade of Alpine PD/AD seemed appropriate.

From ABC2 the two main excursions were to a pair of hills opposite the camp and a five-day excursion to a side valley that Ian had spotted when he and I took a stroll out on the first day. The two hills across the river from ABC2 were climbed on August 10 and 11. Cold Foot Peak was climbed of the day the team crossed the river and Professor Peak the day after.

The best outings from “Ian’s Valley” were a first ascent by Ken Findlay and Will Parsons of Karena Peak, where the soft snow and sections of loose rock gave them one or two moments to think about, and a new route on Cold Sunrise Peak.

On the evening of the 16th we climbed to a high bivouac site in order to access one of the higher peaks in this little cirque. Up at midnight, we edged our way upward among the ice and rock outcrops with only Will seeming to know where he was going. Out in the lead he made good progress between icefalls and rock. At 4 a.m. Will, Paul Lyons, and Ken took a rest, as Paul needed a toilet break. Sue, Ian, and I carried on up towards the ridge and by doing so missed the pantomime of the trip. Paul tried to access his bottom through a climbing harness, waterproof salopettes, fleece salopettes, and underpants. All on a 70° ice slope. It seems that all the various pieces of clothing had to be removed in different directions and Paul’s struggles brought Ken and Will to their knees with laughter. After that event Paul L., Will, and Ken started up the slope following our lights and began to close the gap, until Paul began to ask for more and more rests and in the end started to fall asleep resting on his axe.

Will and Ken realized that Paul was suffering from an altitude problem and decided they needed to get him down. A shouted conversation later and it was agreed that the three below could adequately deal with the situation, leaving those up above free to continue. The descending trio started down immediately, but after a few rope lengths Paul recovered enough for them to stop their dangerous descent and wait until first light. Hacking a ledge on which to sit, Will then got them all to start the digit wiggling procedure that so many mountaineers know. Ian and Susan continued pulling me along and as the sun rose we gained the final section and much to my relief soon stood on the summit of Cold Sunrise Peak. This was our last peak. Fortunately, Paul Lyons recovered as soon as he lost height, and apart from being tired was fit and well. The following day, the 18th, we started our journey back to base camp and finally flew back to the UK on the 23rd.

Editor's note: A full expedition report with photos and maps can be downloaded here. A Swedish expedition in 2012 repeated the northern ridge leading toward Fossil Peak and Karena Peak.