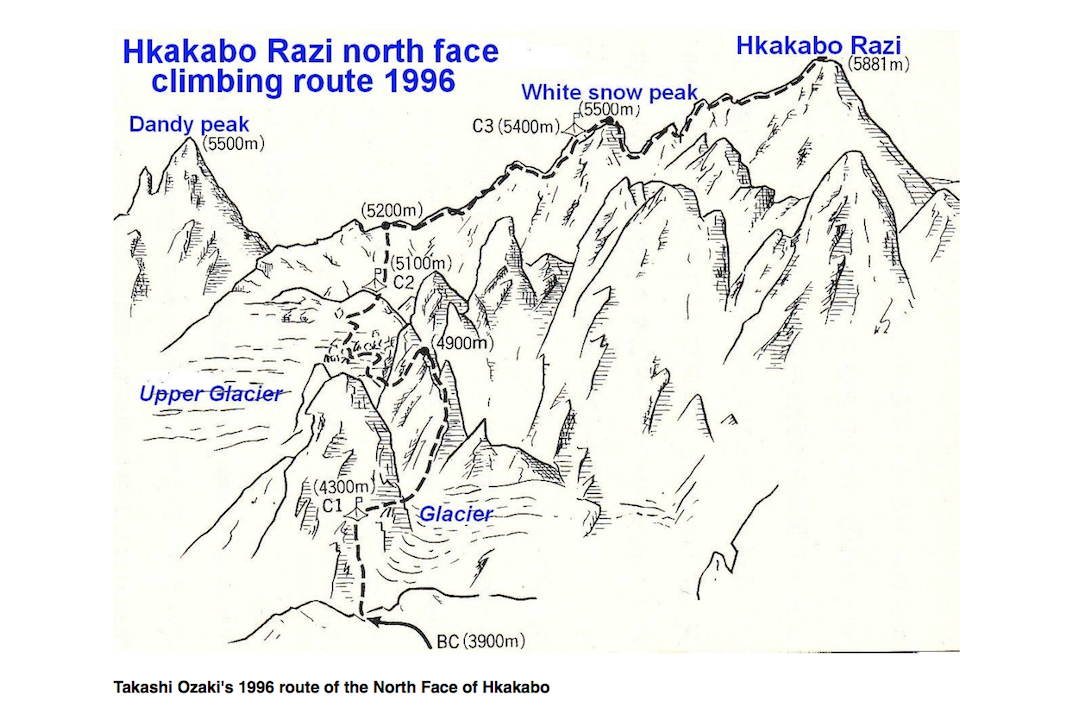 It was reported that Nyama Gyaltsen from Burma and Takashai Ozaki from Japan made the successful first ascent of Hkakbo Razi (5,881m, a.k.a. Hkakabo Razi), the previously unclimbed highest summit of Burma and the mountain marking the easternmost point of the Himalayan chain, in 1996. The ascent was the culmination of four years of work by Ozaki, who had begun negotiations for permission to climb the mountain in 1993, then spent 30 days walking in to the north side of the mountain in the winter of 1994-’95 with his ten-year-old son and a major from the Myanmar (Burma) Hiking and Mountaineering Federation. That attempt ended a day from base camp when bad weather and avalanche danger prevented them from even seeing the mountain.

In the summer of 1995, Ozaki returned with his French wife, his son and daughter, six Burmese team members and a Japanese film crew. They followed their approach of the year before, using machetes to reach the north side of the peak in early August. An Advanced Base Camp was established on the moraine at 3900 meters. Rope was fixed to Camp I (4300m) and then to Camp II (5100m). The climbing featured poor granite, avalanche danger and difficult route-finding; Ozaki and Gyaltsen made it 100 meters above CII before abandoning their attempt.

In July, 1996, they returned, using the same 30-day approach to arrive at BC on August 20. The two re-achieved their high point, then were forced to climb a dangerous hanging glacier to reach the summit ridge, which had many rock sections with climbing up to V+/VI. Camp III was established at 5400 meters and, on September 4, the pair reached a snow dome on the ridge. It had been snowing every day and continued to do so. A faulty stove forced them to return to base camp, and a porter was sent the 60 kilometers to the last village to retrieve their spare high-altitude stove. Gyaltsen and Ozaki returned to CII on September 12, were confined to CIII by heavy weather on the 13th and 14th, and set out for the summit on the 15th. The final 250 meters of climbing presented them with eight pitches of up to V+/VI. A final 50-55° snow slope brought them to the highest point. They made it back to base in time to pack up and leave on September 17. (High Mountain Sports 178)