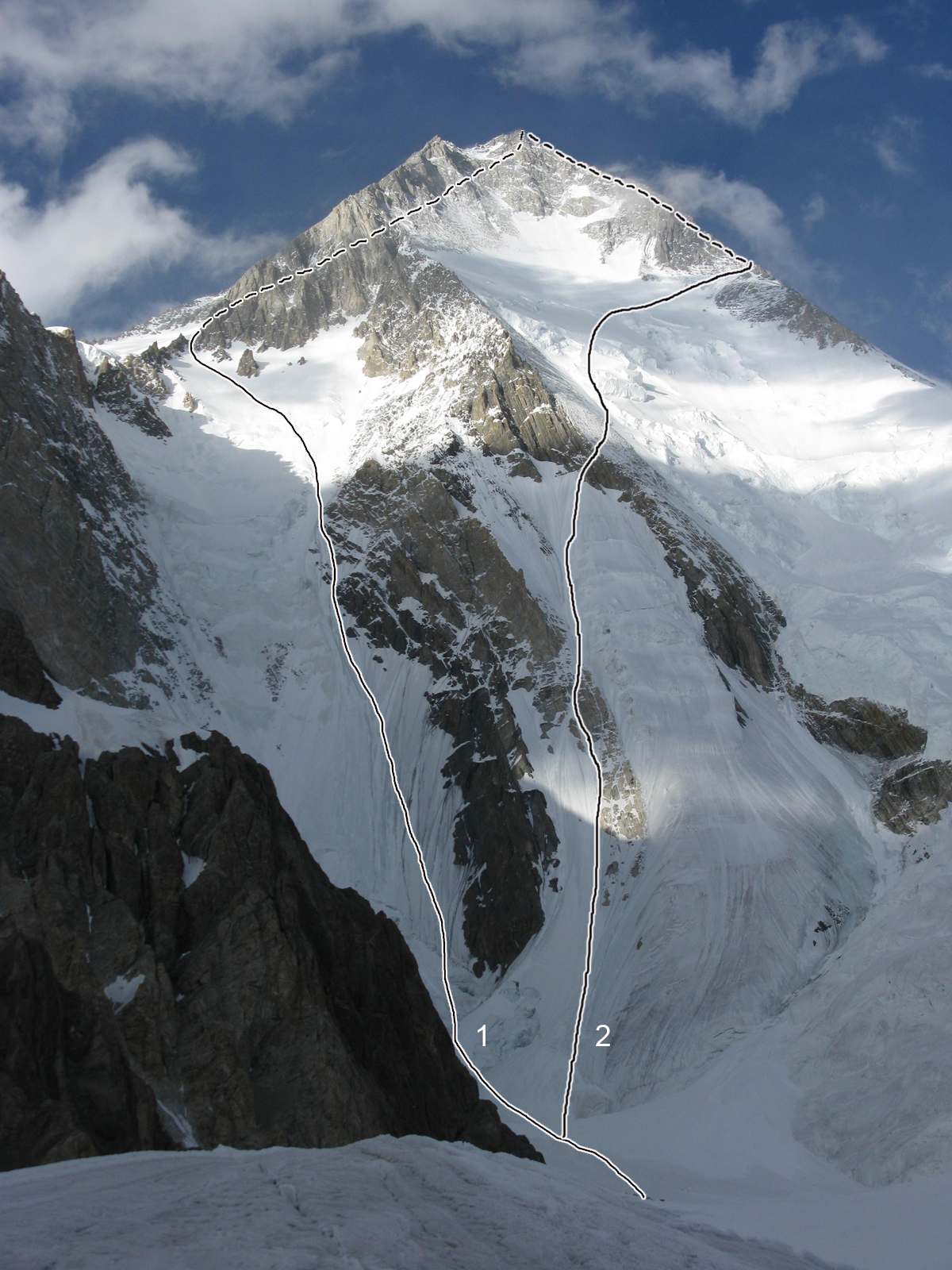 ORIGINALLY THE ALEX MACINTYRE Memorial Expedition was to have had three members. The tragic death of Alex on Annapurna’s south face in the autumn of 1982 left only Jerzy Kukuczka and me for the 1983 expedition. We two set out with 20 porters. We placed Base Camp on the Abruzzi Glacier at 16,750 feet on June 7.

Our first acclimatization trip took us through the Gasherbrum icefall and the southern cwm to the Gasherbrum La (6500 meters, 21,325 feet) and up the southeast ridge to the distinctive snow pyramid of 7200 meters (23,622 feet), where we bivouacked for the third night of that trip. On the second acclimatization trip we regained the pyramid and continued along the southeast ridge to the prominent unclimbed P 7772 (25,500 feet), clearly visible from Base Camp to the right of Gasher-brum II. The night spent on its summit gave us good acclimatization before the final attempt.

This assault, though on partly reconnoitered terrain, was alpine-style. On June 29 we climbed in a long day from Base Camp to the Gasherbrum La. The next day we climbed to 24,275 feet. On the last and summit day, July 1, we traversed over P 7772 and after climbing the connecting ridge, we reached the base of the summit cone of Gasherbrum II at 25,250 feet, the junction point with the original (normal) route. Here we left our rucksacks. At four P.M. in increasing wind we got to the short summit ridge and traversed onto the western side. The wind changed to a hurricane. We fought the last meters through violent gusts to the summit (8035 meters, 26,360 feet). The next morning we started down the original route, totally unknown to us. In a stormy blizzard we luckily found our way and after ten hours’ descent we reached Base Camp.

For the next twenty days we suffered bad weather. Our next objective was the virgin 8000-foot southwest face of Hidden Peak (Gasherbrum I). During the bad weather we did manage to carry 35-pound packs to the base of the wall. Here we witnessed two huge ice avalanches sweep down through the basin at the foot of our wall. On July 18 came the first clearing. Early on July 19 it was snowing again, but surprisingly during the day it cleared up.

On the evening of July 20 we expected five porters at Base Camp to help us out from the region. On the biggest piece of paper I could find, I drew Hidden Peak with two climbers on its face and arrows to the summit to express our intention. I drew Base Camp at the bottom and five porters coming to it and again arrows showing the kitchen tent to sleep in. This was the message for the porters!

At three A.M. on July 20 we set out. At daybreak we faced the deadly basin. We switched off our brains and moved into the danger and crossed it. At one P.M., after climbing 5000 feet, we faced the first unknown, the traverse to the right over the rocky rib onto the center of the wall. We had to traverse for 125 feet over badly protected, UIAA Grade V rock plastered with snow. At sundown, only ten feet remained. Cutting an icy bivouac platform took our last energy.

The next morning we climbed onto the sun-flooded ice-and-rock face. Unroped we carefully ascended 1000 feet on the Grade III mixed terrain covered with powder snow. At noon we stood hesitatingly under the second unknown, the vast snowfields in the sérac zone. We tunneled our way up the heavy snow. After winding through the sérac barrier, we placed our bivouac at 24,275 feet.

On the next day we had hoped to get to the summit. High over the snowfield was the third unknown, the rocky summit cone. We headed a bit to the right and aimed high to the south ridge. Soon we touched the rock. After one pitch it was clear that we wouldn’t get over it before dark. Another variation a bit higher was only slightly better. We had to turn back. On the first rappel I saw my crampon bouncing down between the rocks. There were 8000 feet back down to the glacier. Carefully, sometimes belaying, we climbed down to our bivouac. The prospect of a descent with one crampon the next day down hundreds of meters of slippery rock and ice was horrifying. It seemed so bad that we decided to go up once more the next day.

On July 23 we made an early start. A half hour later I heard jubilant shouts from Jurek. He had found my crampon! Unbelievably, 1500 feet below the unfortunate rappel, it had stuck in soft snow. We soon reached the south ridge. Unexpectedly the ridge provided much unroped, though steep, rock climbing of Grade III. At 2:30 P.M. we were on the summit (8068 meters, 26,470 feet). After descending to our tent, the weather broke. It started snowing. We burned our last gas and ate the last slice of bread. The next day we simply had to get to Base Camp. And we did—at midnight. The porters were still dubiously wondering about my drawing.