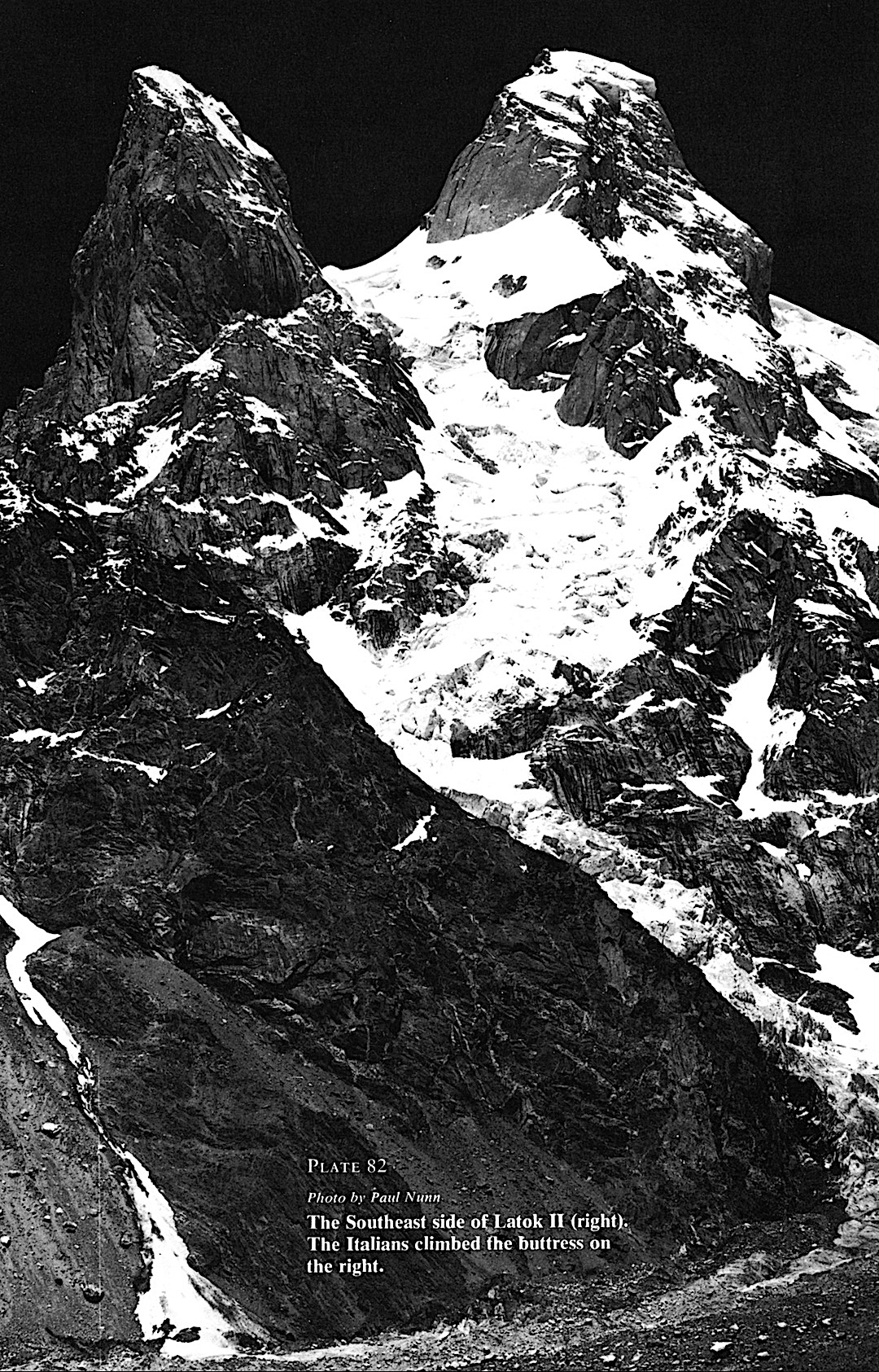 Latok II. We had applied for the Ogre and as second choice, one of the Latok peaks. As permission for the Ogre had already been granted the British, the Pakistani government authorized Latok I (23,440 feet*), which lies between the Choktoi and Biafo Glaciers.

English and Japanese climbers reported the mountain as very dangerous and that ice avalanches continuously swept the south face. Yet we pressed on. We were Dr. Francesco Cavazzuti, Ezio Alimonta, Attilio Bianchetti, Giorgio Cantaloni, Professor Pompeo Casati, Luciano Grassi, Toni Masé, Angela Masina, Stefano Mazzoli, Giavanni Pasinetti, Aldo Rampini, Heinz Steinkötter, Renato Valentini, Giuseppe Villa, Beppe and Italo Zandonella, Angelo Zatti and I as leader. We finally began the eight-day approach march from Dasso on August 3. This took an extra day since we had to rope everything across a stream in flood. Base Camp was set up on a tributary of the Biafo, the Baintha Lukpar Glacier at 14,925 feet. We began reconnaissance on August 12 and soon confirmed the avalanche dangers. There was ice falling continuously day and night on Latok I. We turned to Latok II (23,360 feet), beautiful and demanding but less dangerous. Camp I was in the Latok cirque at 15,600 feet. Camp II was placed on August 16 at 17,900 feet on the south ridge of Latok II. From there the route led over a snow dome, into an icefall and up more snow to Camp III at 19,600 feet. In this section we fixed 1700 feet of rope. From Camp III we traversed right on ice to gain a couloir, then climbed a rock wall and ice to Camp IV at 20,175 feet, fixing 6500 feet of rope. From Camp IV we traversed an ice slope to a smooth rock chimney, 350 feet high, climbed snow and rock to a sharp ridge and Camp V at 21,825 feet. In that section we fixed 1300 feet of rope. We followed the sharp ridge past a big basin, over the south peak along the snowy ridge to the 200-foot higher main summit. Alimonta, Valentini and Masé completed the climb on August 28. After being stormbound for some days, Bianchetti, Cantaloni, Villa and Beppe Zandonella reached the south summit. Meanwhile other climbers made first ascents along the true left bank of the Baintha Lukpar Glacier. The following climbs were made: P 5700 (18,701 feet) on August 16 by Alimonta, Masé; P 5300 (17,389 feet) on August 17 by Bergamaschi, Grassi, Mazzoli, Zatti; P 5050 (16,568 feet) on August 19 by Rampini; P 5300 (17,389 feet) on August 21 by Italo Zandonella; P 5400 (17,717 feet), P 5470 (17,946 feet), P 5370 (17,618 feet) and P 5300 (17,389 feet) on August 24 by Bergamaschi, Casati, Grassi, Zatti; P 5445 (17,864 feet), P 5450 (17,881 feet) and P 5487 (18,002 feet) on August 27 by Casati Mazzoli, Rampini; P 5300 (17,389 feet), P 5670 (18,603) and P 5810 (19,062 feet) on August 31 and September 1 by Pasinetti, Italo Zandonella, Zatti; and P 5620 (18,439 feet) on September 4 by Alimonta, Bergamaschi, Masina, Pasinetti, Zatti. (Each P 5300 was a different peak.) Geological and topographical work was carried on by Professors Casati and Rampini. Base Camp was evacuated on September 7.

* Professor Bergamaschi has recently been kind enough to send us the results of the survey made by his expedition. Triangulation indicates different relative altitudes of the peaks of the group. Latok II appears to be the highest; it is 66 meters or 217 feet higher than Latok I and 304 meters or 997 feet higher than Latok III. The expedition gives a new altitude of 7151 meters or 23,461 feet for Latok II. This is based on aneroid barometer readings at Base Camp. Even though corrected for temperature and relative humidity, the Editor’s experience in the past makes him reject such a measurement as absolutely definitive. However, we have no reason to doubt the comparative altitudes of the three peaks.

The Southeast side of Latok II (right). The Italians climbed the buttress on the right.
Paul Nunn
Previous Next

The Southeast side of Latok II (right). The Italians climbed the buttress on the right.
Paul Nunn
Previous Next