Climbing Half Dome — Twenty Years After 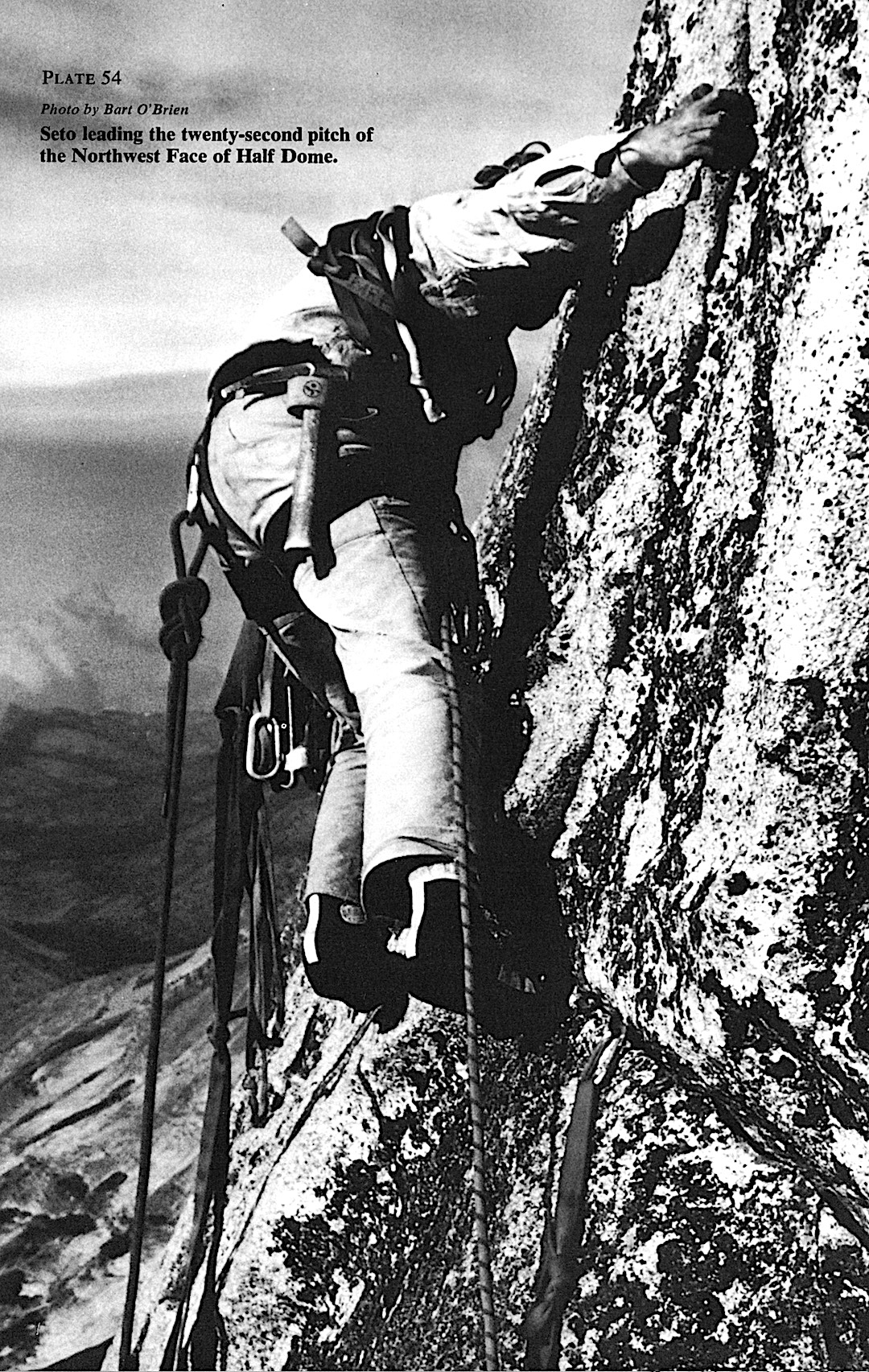 In the eastern end of Yosemite Valley rises Half Dome, one of the scenic wonders of the United States. The summit of this huge granite monolith has been the goal of mountaineers, rock climbers, and hikers since 1850; the first ascent of the dome itself was done in 1875. The northwest side of Half Dome is a vertical face of smooth granite 2,000 feet high. On June 28, 1957, after five days of continuous climbing, Jerry Gallwas, Royal Robbins, and I made the first ascent of this wall.

MICHAEL SHERRICK wrote these words for the Sierra Club Bulletin in 1958, and on the twentieth anniversary of this historic climb, some words of the current status of climbing on Half Dome, and in Yosemite, seem in order.

Most American climbers are only too familiar with the variety of problems currently plaguing Yosemite National Park. In June, when Knic Seto and I hiked up to Half Dome to climb the Northwest Face, we were stunned by another problem—a problem of environmental impact we had never expected.

The approach to Half Dome begins in Happy Isles, the northern terminus of the John Muir Trail and a popular stepping off point for day hikes to Vernal and Nevada Falls. Our journey through this initial part of the hike was probably much like the first climbers, twenty years before. It was early, and we saw few other hikers. Despite the drought, the Merced River was alive and turbulent, and we were drenched by the mist near Vernal Falls.

Little Yosemite Valley was prettier than I can ever remember. The trees were fresh and green, and recent rain had spilled pine needles and covered the soil that has become so compacted and littered in recent years. It must have appeared this way to the pioneer climbers.

Leaving Little Yosemite Valley, the trail switchbacks up through Jeffery Pines and Incense Cedars. The trail is pleasant and well graded, yet unthinking hikers have established many shortcuts and increased trail erosion in their efforts to save a little time. In several places it is difficult to determine the correct route because shortcutting has become so wide-spread. Surely, our rock-climbing predecessors did not encounter this problem.

Once we reached the forested ridge, just east of Half Dome’s shoulder, we dropped down toward the Northwest Face. We were concerned about the route finding because of the prevalence of steep and loose rock, but our fears were unfounded. A well-trammeled climber’s trail, liberally marked with rusted cans and other litter, wandered down through the trees and granite slabs to a huge rock. Here we got our first close-up glimpse of the 160 acres that is the Northwest Face of Half Dome.

Our attention was diverted, however. At the base of the climb we spotted a green tent and further down, an orange one. We were disappointed at having been preceded to the climb. We had walked a long way with heavy loads to have to turn around and go back to the valley. Yet, a closer look revealed that the camps were deserted. In fact, they were not camps at all. The “tents” were actually plastic tarps abandoned by careless climbers. It was not, however, the first Half Dome climbers who initiated this problem. They had respect for the rock. After their climb, they returned to the base and retrieved all of the gear they left behind or dropped during their ascent. But since the passage of these pioneers, Half Dome has been assaulted by hundreds of unthinking mountaineers. The closer we got to the actual base of the climb, the more garbage we saw. Knic and I were dumbfounded. Here we were, standing at the base of one of the world’s truly beautiful mountains and one of North America’s greatest rock climbs. We were following in the footsteps of hundreds of great climbers and considered ourselves a part of the climbing-wildemess community exemplified by John Muir and David Brower. But what had happened? Half Dome had been despoiled by climbers, individuals who are supposed to respect the environment and who partake in a sport so intricately related to wilderness.

Knic and I rifled through the garbage. Every conceivable type of can was present. There was even a broken gateraide bottle! All was not junk, however. We found two fine water bottles that we took on our climb, and our friends carried out a plastic tube tent, several yards of nylon cord, a couple of water bottles, and a knife. Perhaps the final irony was that under a rock, along with several cans and broken bottles, we found a somewhat mildewed, but serviceable pair of climbing shoes. Since I was not happy with the shoes that I had borrowed to wear on the climb, I wore these. They held up quite well, and it was a sentimental moment when I later tossed them into a Yosemite Valley dumpster.

When our friends left, Knic and I climbed two rope lengths. We left our ropes in place and returned to the ground for a good night’s sleep. We had never been on the climb before, nor had we previously done a route of this length. We began the climb with many of the same feelings the first climbers must have had 20 years earlier. Despite the popularity of this great climb, for us it offered a new and unpredictable experience. We soon discovered, however, that the climb itself has also changed since the first ascent. The way is marked with fixed pitons and bolts, and the rock bears the scars of the passage of hundreds of climbers. Yet, Half Dome can still offer the mountaineer a satisfying wilderness environment, but this will require an ecological commitment on the part of all of those who climb the Northwest Face.

As we climbed higher we became only too aware of a strange irony. The fixed pitons on the route allow the climb to be made “clean,” that is, without hammering additional rock-scarring pitons into the cracks. Climbers only need to carry nuts, and the cracks will endure no more scarring. In recent years, cragsmen around the world have debated the ethics of using rock-marring hardware, and the consensus calls for the preservation of the rock. But what about the total climbing environment? It seems that climbers must begin to develop an all encompassing environmental ethic. The climbing location, as well as the climb, must be preserved. 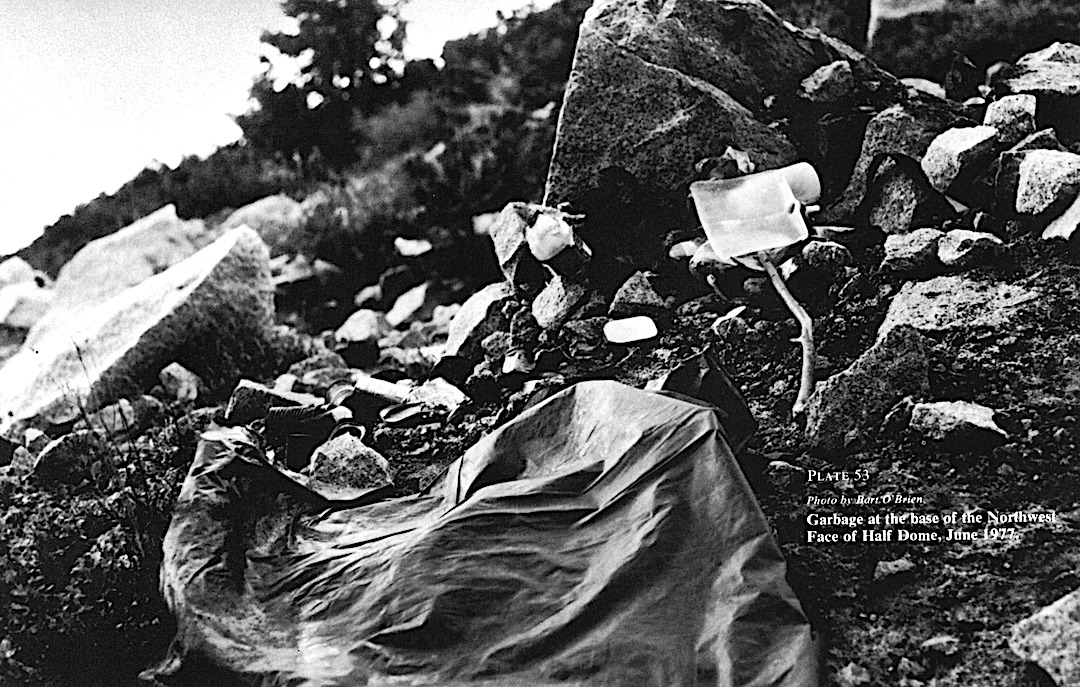 The need for this ethic became even clearer as we progressed upward. Cans and useless old slings littered every ledge, and at one point, our attention became focused an another ethical issue confronting the climbing community. At the far end of a ledge was a stained paper bag. Knic’s curiosity got the better of him, so he retrieved it. Inside we found a broken bottle of benzoin. We could hardly believe it. In recent years, certain over-zealous climbers have been trying to extend their free climbing abilities by using a controversial chemical aid, tincture of benzoin. This toughens their skin, enables them to endure more pain, cling to small holds, and climb harder routes. We were incredulous. Here, six hundred feet off the ground, some climber had broken and abandoned his bottle of chemical courage!

About halfway up the wall, the trashiness of the route began to subside. Perhaps climbers were throwing their garbage off the rock, or I hope, they too became appalled at the littered condition of this beautiful route and finished the climb with their empty cans and water bottles in tow. Good climbing sense dictates that with the current popularity of the sport, we, as climbers, must work to preserve the wilderness environment that the enjoyment of this activity is so contingent upon.

The National Park Service has been very gracious to the resident and non-resident climbers in Yosemite. Climbers have their own camp, they are paid well for work on rescues, and they benefit from laxity in regulations that other visitors must follow to the letter. This symbiotic relationship should be preserved, but climbers are beginning to overextend their privileges. We must take responsibility for preserving the quality of the rocks and mountains we climb. If we fail, we risk losing the freedom that makes climbing such a desirable activity.

Garbage at the base of the Northwest Face of Half Dome, June 1977
Bart O'Brien

Garbage at the base of the Northwest Face of Half Dome, June 1977
Bart O'Brien