Kanchenjunga from the East 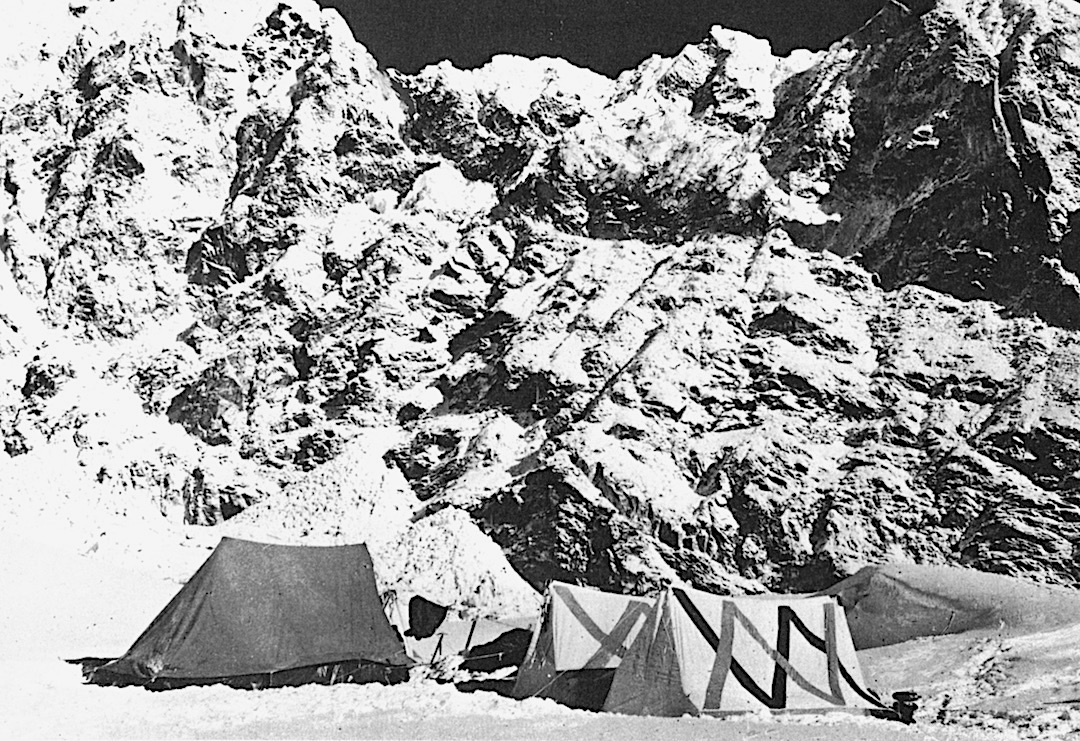 There is no doubt that those who first climb Kanchenjunga will achieve the great feat of mountaineering, for it is a mountain which combines in its defences not only severe handicaps of wind, weather, and very high altitude, but technical climbing problems and objective dangers of an order even higher than we found on Everest.—John Hunt

HAVING read Sir John Hunt’s statement and knowing that its eastern side was still unclimbed, I felt that there could not be a bigger mountaineering challenge in the world than this. With the help of General T.N. Raina, MVC, Chief of the Army Staff, Indian Army, we launched in March 1977 an expedition purely of Army personnel, sixteen climbers and two doctors. For support we used men from the Ladakh Scouts. The choice of season was difficult as all the expeditions on the eastern side had gone in the post-monsoon period. However, when I read books on the mountain by Sir Joseph Hooker, Freshfield, Paul Bauer and an article by Lord Hunt, I found that there is a period from the end of September to the first week of October during which Kanchenjunga normally gets terrible weather, cataclysmic at heights. I also had personally experienced this weather when I was in West Sikkim in the first week of October, 1968. Rain continued for four days and thousands of people were killed in landslides. Almost all the bridges in Sikkim were washed away. According to my calculations if we were to be successful on Kanchenjunga, by the first week of October we would be somewhere on the northeast spur in this deadly weather. The Germans led by Paul Bauer had tried the route in 1929 and 1931 and in the second try had reached a high point of about 25,000 feet, but they were ultimately defeated not only by the technical difficulties but even more by avalanches and by post-monsoon powder snow lying on knife-edged ridges and ice towers. Therefore, despite the tremendous logistical difficulties of reaching Base Camp in early March up a valley still under heavy snow, I decided to attempt the mountain during the pre-monsoon season.

The advance party left Lachen, the roadhead, on March 7 and reached Base Camp up the Zemu Glacier on March 24. We followed the same route as Paul Bauer’s German expeditions. The stages of the approach march were Tamen, Poke and the Rest Camp. We established Base Camp in the area of Green Lake at 16,200 feet and Advance Base Camp at the junction of the Zemu and Twins Glaciers at 16,725 feet. Camp I was located on the high plateau next to the rock island above 700 feet of icefall. We found the icefall in terrible condition, not from climbing difficulties but because of avalanches.

Still following the German route, we established Camp II at 19,500 feet on April 8 on top of the coxcomb ridge, known as the northeast spur. The route from Camp I on was difficult and ropes were fixed along nearly the whole length. A party successfully reconnoitred along the horizontal ridge and found it too difficult for loaded porters. On the return journey to Camp I Havildar Sukhvinder Singh fell off a cliff below Camp II and died on the spot from head injuries and a broken neck. His body was carried to Base Camp and cremated with full military honours. 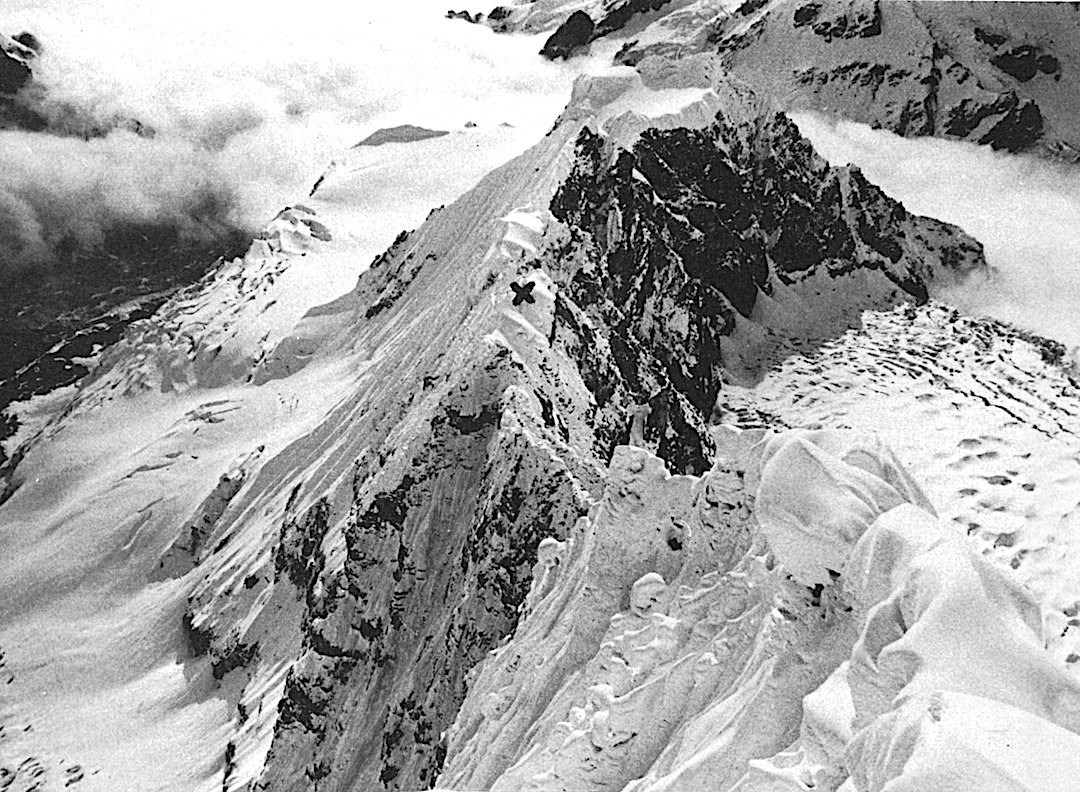 After the cremation on April 18, the climbing started again. We found a new route to the top of the crest of the northeast spur. The route went diagonally from the foot of the “Eagle’s Nest” across the south face of the spur to where the spur rises very steeply upward. The last 400 feet were up a precipitous ice gully overhung with ice mushrooms at the top. This was one of the most dangerous parts of the climb. Many of us and of the porters were hit by falling snow masses, but nothing serious happened as we were anchored by Jümars to fixed ropes. The ice gully led to what the Germans called the “col.”

A new but temporary Camp II was established below the col near the base of the gully but it was used only till Camp III was opened. This camp was established at 20,675 feet on April 30 on the only available flat place in this vertical jungle of snow. To reach it we had to climb along the ridge, which was often knife-edged and very badly broken, with steep fluted sides. Generally we kept on the Zemu side, i.e. the southern side of the spur, ten or twelve feet below the crest, but many times we had to balance on the crest of the deadly ridge, which fell steeply on both sides—one to the Zemu and the other to the Twins Glacier. Camp III could be established only after another temporary camp was placed between the col and Camp III.

It took us 13 days from Camp III to Camp IV, a vertical rise of about 1000 feet. We had to hack away tons of ice to prepare the route and at times were forced to tunnel through the mushrooms. The traverses on the sheer ice cliffs were the worst. Camp IV was placed on May 12 at 21,750 feet at the point where easier going on the mountain starts. On these easier slopes the greatest difficulties were the whiteouts and blizzards which obliterated our tracks within a few hours. Camp V was established May 18 at 23,725 feet just below the third hump as seen from Camp I.

From Camp V to Camp VI we followed the broad ridge. Camp VI was established on May 24 at 25,050 feet just before a kilometer-long ridge which ends at the col that separated the northeast spur from the main ridge. Above the col there are 300 to 400 feet of steep face which had turned back the Germans in 1931 when they found it with very dangerous avalanche snow. In our case it was not much of a problem. After climbing this face, we followed the north ridge and on May 30 placed Camp VII at 26,225 feet.

This year all over the Himalaya the pre-monsoon weather was terrible. It had affected our ferries tremendously. It was now a case of touch and go in the race with the monsoon. Four men supported our summit party to carry oxygen, food and tent to the last camp. This had been placed much lower than planned. Considering that on the 1965 Everest Expedition we had gone from 26,000 to 28,000 feet in six hours time, we felt that the summit party still had a chance. On May 31 Major Prem Chand and Naik Nima Dorje Sherpa left Camp VII at six A.M., first crossed a long snowfield which comes down from the face of the west ridge and then took to the rocks of the north ridge. It was a very long climb and they did not reach the summit until 2:54 P.M. They actually stayed six feet below the true summit in order not to offend Sikkimese religious feelings. They carried two oxygen bottles— French Himalaya type—with them and used oxygen at the rate of two litres a minute. They returned to Camp VII at 8:20 in the evening. They were lucky that the weather had remained good. Moonlight helped them find Camp VII on the descent.

The second summit party, Captain Kiran I. Kumar and CHM Cheering Norbu, had to be called back from Camp VI as the weather had deteriorated. The team reached Lachen on June 12 under extremely bad weather conditions.

The South face of the Nertheast Spur of KANCHENJUNGA
Narinder Kumar

The broken crest of the Northeast of Kanchenjunga. Old Camp II is marked (x)
Narinder Kumar
Previous Next

The South face of the Nertheast Spur of KANCHENJUNGA
Narinder Kumar

The broken crest of the Northeast of Kanchenjunga. Old Camp II is marked (x)
Narinder Kumar
Previous Next